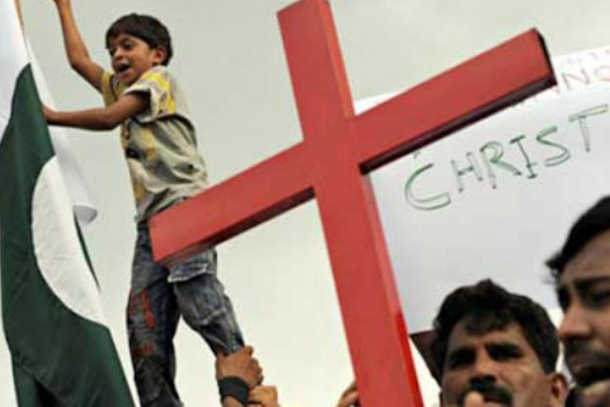 Speakers at a National Minorities Day convention expressed deep concern over the escalation of violence in Pakistan against religious minorities and the institutionalization of religious and sectarian intolerance.

As concern grows over increased violence against Pakistan's religious minorities, the recently formed National Commission for Minority Rights (NCMR) has expressed its grievances for the first time in public.

“We strongly recommend legal and constitutional backing. Without an independent and investigative role, our presence doesn’t even matter. We shouldn't even be here,” said Albert David, chairman of the Pakistan United Christian Movement.

“I assure you we all have a very strong feeling about it and even shared it at the very first introductory meeting. A strong commission backed by financial support can help future members deliver. With the support of civil society organizations, we can make it more active.”

David was speaking on Aug. 11 via video link at a National Minorities Day convention titled “Democracy versus Tyranny of Majority” at a hotel in Lahore. The National Commission for Justice and Peace, the Catholic Church's human rights body in Pakistan, jointly organized the event with local rights organizations. The organizers invited fewer than 100 participants as hotels and restaurants open for public gatherings must follow social distancing measures amid the coronavirus pandemic.

The speakers expressed deep concern over the escalation of violence against religious minorities and the institutionalization of religious and sectarian intolerance, referring to recent legislation by the Punjab Assembly on the protection of Islam and the Punjab Textbook and Curriculum Board.

Leaders from various political parties shared video messages highlighting their services for religious minorities who often complain of discrimination and misuse of the blasphemy law.

Banners featuring Shahbaz Bhatti, the Catholic federal minister for minorities who was assassinated in March 2011, were displayed on the Mall Road in Lahore congratulating non-Muslim citizens. Bhatti campaigned to have Aug. 11 declared National Minorities Day in 2009.

In May, Prime Minister Imran Khan approved the establishment of the NCMR, more than six years after the Supreme Court, in a landmark judgment, called on the government to set up a body to protect the rights of minorities under the constitution.

In a study released last year, the Centre for Social Justice (CSJ) published an analysis of the verdict welcomed by church leaders. According to the findings of the report titled “A long wait for justice,” compliance by the federal and provincial governments stood at no more that 24 percent.

“The security of places of worship and minority settlements have been at risk due to terrorism (linked to so-called religious ideologies) and mob attacks. The task force for religious and social tolerance ought to be an empowered, time-bound, independent, well-resourced and permanent federal body that should reflect diversity in Pakistan,” it stated.

"The provincial governments either presented their security plans or took some measures, therefore we see ... declining firepower of extremist groups, although the cost of security measures was shifted to the concerned communities. A church in Khanpur, South Punjab, was closed for a couple of months because it did not have a boundary wall. Such uncanny application of security policy creates resentment and alienation which take a long time to resolve."

Last week a Christian named Sohail Masih was arrested on blasphemy charges for an anti-Islam post on Facebook. The same evening, an enraged mob held protests and attacked a police station in Nowshera Virkan in Punjab province shouting slogans against Masih.

In April, Punjab's cabinet for the first time set a 2 percent quota for students from religious minorities in higher education institutes in a measure long sought by Pakistani activists. However, rights groups including the CSJ criticized the setting up of a “toothless” commission. “Minorities are facing exclusion in the face of the government’s oligarchic characteristics. The government should make it a policy priority to strengthen institutional protection of minority rights by undertaking legal, policy and administrative measures to cater to the challenges of inclusion of minority citizens in Pakistan," Peter Jacob, executive director of the CSJ, said in an Aug. 11 press statement.

The NCMR also discussed challenges facing the government body at an Aug. 10 meeting. Commission members plan to represent their recommendations in a draft bill to parliament.

On the same day, Punjab parliamentarian Hina Pervaiz Butt submitted a resolution in the provincial assembly demanding inclusion of minority heroes in the curriculum.

Archbishop Sebastian Shaw of Lahore, an NCMR representative, supported the calls for a greater status for the commission. He also demanded renaming Minorities Day the Day of Equality.

“Christian leaders supported the country’s founder Muhammad Ali Jinnah to escape religious and economic prejudices. This is an important day to remember these commitments. Together as a nation, we have effectively controlled the spread of the coronavirus pandemic despite a big population and widespread poverty. Religious conflicts will break us apart,” the archbishop said at a separate event held at Governor House in Lahore.

“Pakistan was built on the principles of equality, religious freedom and tolerance. On #NationalMinoritiesDay, Australia joins Pakistan in recognizing the contribution of its religious minorities in building a strong, open and dynamic nation as envisaged by Quaid-i-Azam Muhammad Ali #Jinnah,” he tweeted on Aug. 11.