Mary Jane Veloso tried to lift her family from generations of poverty, but now faces execution 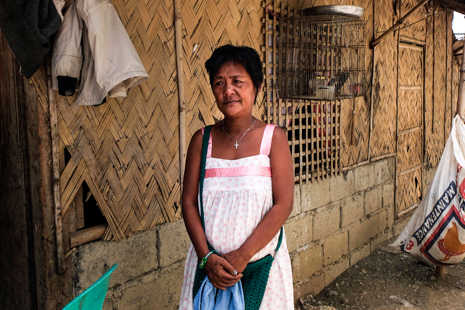 Celia Veloso's daughter, Mary Jane, has been on death row in Indonesia for the past five years. (Photo by Jimmy Domingo)

The dusty road to the village of Caudillo cuts through a parched cornfield that sizzles under the midday sun. Celia Veloso, 55, saunters along, protecting herself from the sweltering heat with a tiny cotton towel draped over her head.

She’s on her way to the next village to help prepare for a local celebration.

“We will have dinner tonight,” she said, smiling. If she’s lucky, she might earn about two US dollars for her help.

This weekend work, helping neighbors in exchange for food or a bit of cash, has become a welcome break from Veloso’s usual daily labor: collecting discarded bottles, plastic bags and other junk from around her village. Veloso and her husband sell the junk to shops.

It doesn’t provide much, and the money has to stretch a bit further these days. There are grandchildren to feed, and a missing child who can’t help the family income.
Five years ago, Veloso’s daughter, Mary Jane, was locked up and sentenced to death in another country.

When Indonesia resumed its executions of convicted drug traffickers earlier this year, international media focused on Australians Myuran Sukumaran and Andrew Chan, two of the so-called Bali Nine smuggling ring, who have been on death row since being sentenced in 2006.

But other countries’ citizens have also been caught in the nets of the Indonesian justice system. The case of Veloso’s daughter, Mary Jane, has slowly captured the attention of the Philippine public in recent weeks. Over the past five years, there had been little information about the case; Mary Jane’s parents did not publicize it and local media only paid any attention to it through republished international wire stories.

But that changed this year, when Indonesian president Joko Widodo in January rejected appeals for clemency from 16 death row prisoners. After years of uncertainty, Mary Jane Veloso, it seemed to her family, would soon be executed. A wedding photo of Mary Jane Veloso, who was only 17 years old when she got married. The marriage has since been nullified because she was a minor. Her husband has already remarried (Photo by Joe Torres)

For Indonesian authorities, the facts about the case are simple. Mary Jane Fiesta Veloso, 30, was discovered at an Indonesian airport with 2.6 kilograms of heroin hidden in her suitcase. She was convicted and sentenced to death in October 2010.

But Mary Jane’s family maintains that the mother of two is innocent. From multiple telephone conversations with her over the years and a recent in-person visit, Veloso’s mother, Celia, and sister, Maritess, have put together a different narrative. They believe her to be a victim of an international crime syndicate that uses innocent women to traffic drugs around Asia.

Mary Jane was only 25 when she left home in the village of Caudillo, near the city of Cabanatuan in the Philippines’ Central Luzon. Her goal was to help her family. Her godsister, Cristina, had promised her a job working as a housemaid in Kuala Lumpur, Malaysia.

But when the two women reached Malaysia, Cristina told Mary Jane that the job had already been filled. There was more work available, however, in Yogyakarta in Indonesia. Would she be interested?

Mary Jane agreed. Before leaving, Cristina took Mary Jane to shop for new clothes. She gave Mary Jane a new suitcase as a gift. When Mary Jane questioned why it was so heavy, Cristina told her it was because the suitcase was brand new.

Mary Jane, who had finished only her first year of high school, opened the suitcase and found nothing inside. She put her clothes and belongings in, then boarded a flight with Cristina.

When they arrived at Yogyakarta’s airport, however, the suitcase set off an alarm at an X-ray scanner. Indonesian authorities asked Mary Jane’s permission to open up the suitcase.
They found packs of heroin wrapped in aluminium foil. They later estimated Mary Jane was carrying narcotics with a street value of US$500,000.

As she stood there, Mary Jane looked around, but she could not find Cristina. Mary Jane's father, Cesar Veloso, said he tried to kill himself after learning his daughter was sentenced to death (Photo by Jimmy Domingo)

On May 10, 2010, Mary Jane called home to wish her father, Cesar, a happy birthday. She sang him a birthday song.

It had been two weeks since she had been arrested but she hadn’t told her family.

The next day, Mary Jane sent a cryptic text message. She was telling her family goodbye.

Her sister, Maritess, replied: “Mary Jane, is there a problem?”

When she finally told her family what had happened, Cesar was in shock. He tried to commit suicide three times in the coming days, he recalled in an interview this month with ucanews.com.

Five years later, his daughter is still alive, but her future on death row is far from certain.

“We are poor and we have nothing to pay for her freedom,” Cesar said. “If only we were rich, I would sell everything that I have to set her free.”

The Veloso family’s poverty has been passed down through generations. Cesar’s parents also collected junk and scraps for a living. Celia, his wife, is the daughter of a landless peasant farmer.

When their children were young, they both worked on a sugar plantation.

"We dreamed of sending my children to school," Cesar said. "I persevered and worked hard, but I was really unfortunate." His income was often not enough to feed the family.

The children grew up eating nothing but gruel, he said. "We put a lot of water on a handful of rice and mix it with corn," Cesar said. "The children understood our situation. I would always tell them to just drink a lot of water so that they would not go hungry.”

But the children did their best to change the family’s fortunes.

As they grew older, one daughter went to Japan to work as a housemaid. After a few years, she came home broke and with children of her own. Another daughter went to the Middle East but came home sick. Other children stayed home, got married and followed what has become a family tradition: low-paid, landless farm work. The family’s well-being was not improving. “The situation was the same like when I was young," Cesar said.

But Mary Jane, the only one of the Veloso children to reach high school, wanted to change that.

She first worked abroad in the United Arab Emirates. After 10 months, she returned home because, she said, her employer had tried to rape her. When she left for Malaysia, she was making another attempt to help wrangle her family out of poverty.

"She was crying and she embraced me," he recalled. "Father, we are poor,” Mary Jane replied. “I might be lucky this time.” Promise of a bright future

Thousands of Filipinos leave home every day looking for a brighter future abroad.

Migrante, an international federation of Filipino migrant workers, says at least 6,000 Filipinos leave the country daily in search of work, citing research from the Quezon City-based Ibon Foundation. That would represents a 50-percent increase over 2010 estimates, around the time Mary Jane left home.

Migrante notes that more female workers are facing hardships and exploitation in recent years. In the first two months of this year alone, Migrante says it has handled at least 50 cases of violence against Filipino women abroad, including physical assault, sexual harassment and attempted rape.

Garry Martinez, Migrante’s chairman, said a worsening economic situation at home in the Philippines is driving more women abroad and making them vulnerable to trafficking and abuse in the workplace.

But they have become a vital part of the Philippine economy today.

In 2013, Filipinos sent home remittances worth US$25 billion, according to the World Bank. Globally, only citizens of India and China sent home more money. In the Philippines, the World Bank says that remittances equate to more than one-third of the revenue the country derives from exports.

Veloso is not the only Filipino facing execution abroad. On March 10, Philippine Vice President Jejomar Binay, who is also the presidential adviser on the concerns of overseas Filipino workers, announced that there were 80 Filipino workers on death row in various countries. He said that of the 80 migrant workers facing execution, 27 were in Saudi Arabia.

Groups like Migrante believe the last five years have been gruelling for Filipino workers abroad as working conditions deteriorate.

"What our workers and their families need during these hard times are actions and programs from a government that would enforce the creation of jobs at home," Martinez said in a statement. Home for Mary Jane, however, has always meant poverty. It is the poor village of Caudillo where she used to collect empty bottles and sell "ice candy" to neighbors to help feed her own two children, who are now living with her former husband.

In February, the Indonesian government allowed the Veloso family — Celia, Maritess and Mary Jane’s two children — to visit her in prison.

“I am not afraid,” Mary Jane told Maritess. “… If the decision of the Lord is for me to be executed, then maybe the Lord wants me already to be on his side.”

During the February meeting, Mary Jone told her mother “to expect bad news”.

“Mother, help me,” Celia recalled her daughter saying. “I still want to be with you. Mother, I don’t want to die.”

Under the shade of their small hut by the side of a dusty village road this month, Celia cried as she remembered her daughter’s message.

For five years, the family waited for help but there was nothing: no government statements, no protest rallies, no prayers, no media coverage.

Now, her long wait continues. The Philippines Department of Foreign Affairs in January launched another formal appeal urging a judicial review of the Veloso case. Indonesian officials recently announced they had delayed the executions, including Veloso’s, to allow for decisions in each respective appeal.

Celia isn’t sure what to believe.

“There were promises, but Mary Jane is still in jail. Years have passed and there was nothing done. Nobody helped us,” Celia said.

“Just tell me if they are already going to kill my daughter.”