A ‘pure blood’ claim that discriminates among Indian Catholics 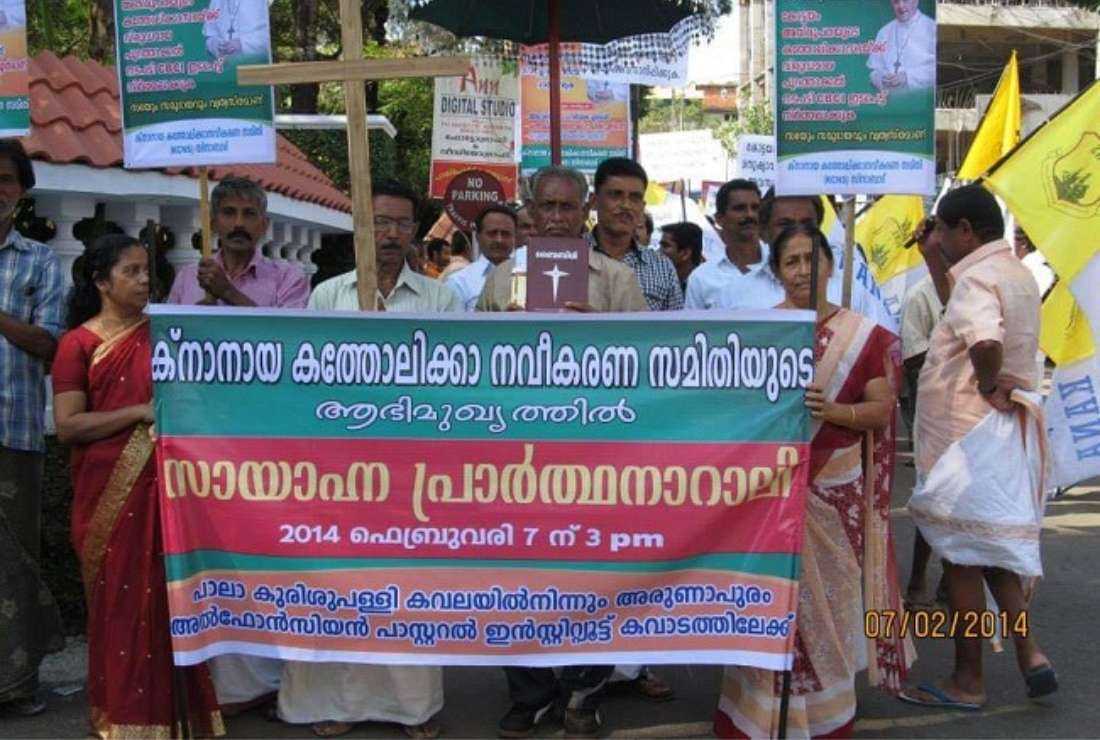 Photo of a prayer rally conducted by the Knanaya Catholic Reforms Committee (KCNS) in 2014. (Photo: thenewsminute.com)

At 63, Biju Uthup is determined to continue litigation stretching three decades seeking court intervention to stop his local Catholic diocese from discriminating against people based on “purity of blood.”

Uthup, a retired scientist from India’s Aeronautical Development Agency, began his struggle in 1989 when his diocese refused to recognize his marriage on the grounds that his grandmother belonged to the Latin rite.

His grandmother’s "impure blood" made him impure and hence, he cannot be a member of the diocese, he was told.

“It shocked me. But the Church leaders were not ready to change, forcing me to move civil court to fight this demonic idea,” Uthup said.

His archdiocese of Kottayam, a diocese until 2005, was established in 1911 for an endogamous Catholic community within the Eastern rite Syro-Malabar Church. The group, known as the Knanaya community, would not accept those marrying from other Catholic dioceses, who they consider Catholics of impure blood.

The Knanaya community claims to have its origin from a group of Jewish-Christian emigrants from Cana in Southern Mesopotamia, who landed on the Kerala coast in AD 345. They claim to be maintaining the purity of lineage by not accepting those marrying outside their community.

Uthup said the diocese initially refused to solemnize his marriage with a woman from the same community saying the diocese received a complaint that his grandmother belonged to the Latin rite and therefore he could not be counted as a member of the community.

Uthup challenged the “pure blood policy” in a court in 1989 when the marriage was denied. After two years of wrangling, in 1991 the court ordered the diocese to solemnize his marriage. But the diocese appealed against the order in the district court and later in the state high court.

Meanwhile, Uthup’s marriage was solemnized in the diocese with the special intervention of the then Apostolic Nuncio to India, in 1991. But still, the diocese refused to issue him a certificate showing that he was married in the diocese.

Uthup’s siblings were married in the diocese and his family was considered part of the community but now his entire family faces social rejection because they are considered people of “impure blood” and outsiders, he said.

“They are not led by the Holy Spirit, but an evil spirit.… I will continue my fight against this racism in the Church until everyone ostracized from the community is brought back,” he said. 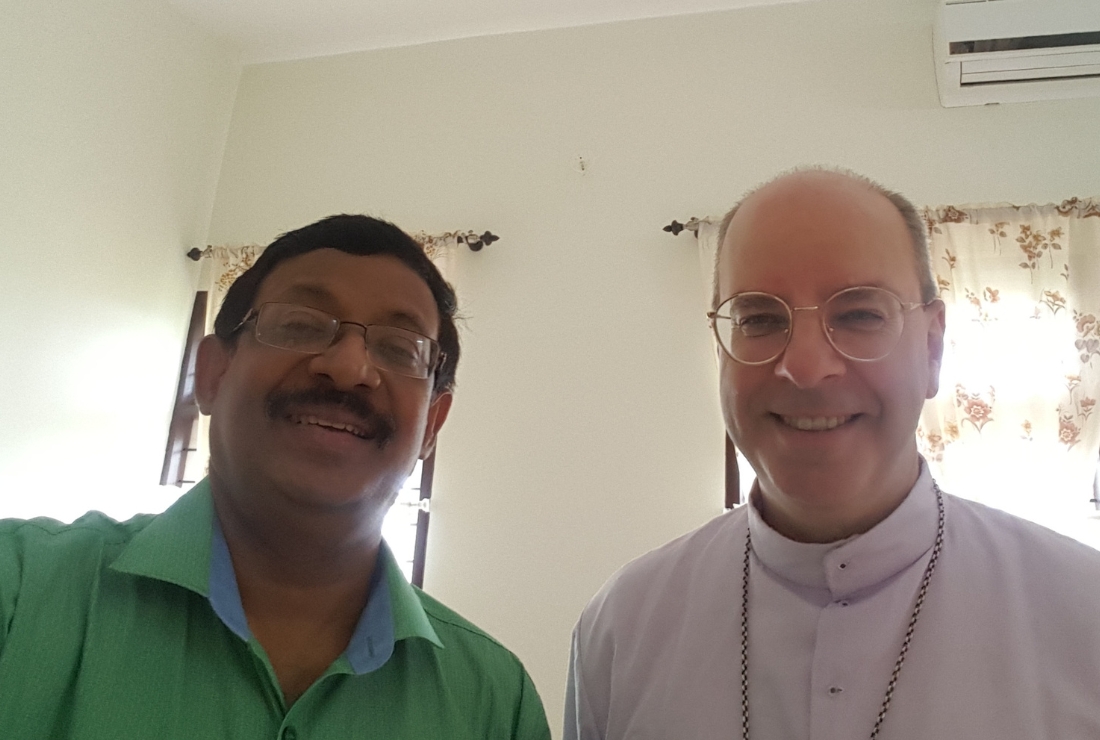 Illegal, but the Church practices it

Uthup’s ordeal is just one among thousands of cases, says T.O. Joseph, who leads the Knanaya Catholic Reforms Committee.

Joseph, an 80-year-old retired school teacher, said until Uthup’s case came up in court he “never realized the gravity of the social exclusion of my family.”

The case caught the attention of many others who also suffered similar ill-treatment from their diocese and have come together to fight against it, Joseph said.

Joseph said he was excommunicated when he married a woman from the Jacobite Christian community in 1977.

“It was a marriage arranged by the families as we could not find a suitable match in the community then,” he said adding that he took the expulsion “as part of the divine norms of the Church and did not resist it then.”

But Uthup’s case made him realize that “this unchristian practice is nothing less than apartheid,” he said.

The Reforms Committee won a protracted legal battle on April 30, 2021, when a lower court in Kottayam district, in a 155-page ruling, said the endogamy practiced by the Knanaya community was against the law.

The court said a Knanaya Catholic marrying a Catholic from any other diocese should not result in him or her losing diocesan membership.

The court also prevented the diocese “by a decree of permanent prohibitory injunction from terminating the membership of any member of the Archeparchy of Kottayam for marrying a Catholic from any other diocese.”

It also directed by “way of a decree of mandatory injunction to provide equal rights and facilities through parish priests for the sacrament of marriage to those members of the Archeparchy of Kottayam who wish to marry Catholics from any other diocese.”

The diocese appealed against the lower court’s ruling in the district court, which upheld it. The diocese has now appealed to the Kerala High Court seeking to get the order quashed. A photo of Knanaya priests chanting Bar Maryam, an ancient East Syriac chant distinct to Knanaya Christians during a Knanaya wedding in the 1980's. (Photo: Wikipedia.org)

Father George Karukaparambil, the public relations officer of Kottayam archdiocese told UCA News on Dec. 19 that they “follow the practice of endogamy and it has been part of our culture for some 1,700 years.”

He, however, refused to respond to the system or the ongoing controversy. “At this moment, I would not like to make any comment on this matter as the case is pending in the court,” he said.

But people like Joseph say the practice of endogamy was never part of the community or the diocese but crept into the Church somewhere around the 1950s.

The Vicariate of Kottayam was established in 1887 as one of the first two ecclesiastical units for the Syro-Malabar Catholics in Kerala, the other being the Vicariate of Trichur. Since then until Kottayam was made a diocese, the community did not practice endogamy with this strictness.

Endogamy became sort of a norm during the tenure of Bishop Thomas Tharayil (1951-1974), Joseph said.

Knanaya Christians are spread across all seven groups of St. Thomas Christians, including the Catholic Church, who trace their faith to St. Thomas the Apostle, who is thought to have landed on the southwestern Indian coast in 52 AD.

The community has no exact data about its population, but the Archdiocese of Kottayam has some 200,000 Catholics. Joseph estimates that at least half of them are ostracized for marrying outside the diocese.

“The reality is that the diocese is dying, but its leadership is still caught in a web of evil spirits and therefore, it does not want change,” says John Joseph, a 40-year-old Knanaya man based in Manathavady in the northern part of Kerala.

John Joseph said he remains unmarried as he could not find a suitable match from within the community.

He was part of the diocesan youth bodies, but fell apart after he began "questioning the foolishness of endogamy,” he told UCA News.

He said the pure blood theory “is inhuman and unconstitutional”.

According to him, the community’s claim of lineage to Jewish-Christian emigrants who landed on the Malabar Coast is fabricated as their members are the same as others in Kerala in “features, color and follow the same traditions.”

The first migrants were considered to be about 400 people from 72 families, who came in seven ships headed by Thomas of Cana or Kana.

“The current Knanaya community is believed to be their descendants. If that is true why are their culture, traditions, and even language the same as the local people following Dravidian culture, except for the practice of endogamy?”

He said hundreds of young people are forced to remain unmarried as they are unable to find suitable matches from within the community. They are afraid that marrying outside the diocese may result in a social boycott.

“Now the community is shrinking, but still the Church leadership and a section of fundamentalist followers are not ready to give up their ego and take everyone together,” John Joseph said. The Vatican on several occasions termed endogamy an unchristian practice.

The Congregation for the Oriental Churches in 1986 opposed the move of the Knanaya community to introduce the endogamy practice when a special ministry was established in Chicago for migrant Catholics from Kerala.

The then Chancellor of the Archdiocese of Chicago wrote that the Oriental Congregation has allowed the special ministry for the Knanaya community on the basis that those Knanaya Catholics who married outside the community and their spouses can “enjoy equal status in the ministry.”

The Catholic congregation in Chicago “does not accept that the customary practices followed in Kerala, of excluding from the community those who marry non-Knanaya spouses, is extensible to the United States of America.”

However, in March 2001 Pope John Paul II established the St. Thomas Syro-Malabar Diocese of Chicago to cater to the spiritual needs of the Knanaya community in the area.

The diocese tried to practice endogamy despite the Vatican’s instructions against it. Following complaints in November 2015, the Vatican appointed Bishop Michael Mulhall of Pembroke diocese in Canada as an apostolic visitor to study the situation of the Knanaya community throughout the world.

The study report released in 2017 said a link has “developed between the practice of endogamy and ecclesial life” and it “has been tolerated de facto in territorium proprium [Kerala] and it is not to be permitted elsewhere."

It further said, "pastoral care [should not] make any allowance for endogamy to play a role in defining the membership of faithful in any mission or parish established by the eparchy".

A 2019 letter from Cardinal Leonardo Sandri, the then Prefect of the Oriental Churches at the Vatican, shows that endogamy was still practiced in the Eparchy of Chicago.

“Any pressure in this sense [expelling those marrying outside the community] would be illegitimate. Moreover, participation in parish activities is open to non-Knanaya spouses, as well as any children born of the marriage,” it said. K. Punnan, a retired Indian Air Force officer and a member of the Church, said he stopped going to the Knanaya Church in 1970 after finding that the practice was “not in accordance with what Jesus taught us.”

Punnan, 76, said he made several attempts to convince bishops, but they do not want to change even after knowing that the practice is wrong. They do not even care to follow several communications from the Vatican to end this, he said.

“This idiotic practice has divided families and many were forced to stay away from family and Church functions.  The Church should not divide families instead it should unite,” said Joseph.

Joseph and Uthup are pinning hopes on the pending cases.

“It is a fight against evil spirits and I am sure I will win it,” Uthup said. “I feel like God has commanded me to take it up.”

“My fight is not for me or my family, but it is for all those who were forced out from the Church. I want to see them all returning to their parent diocese and celebrating their life together,” Uthup said. 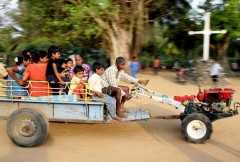 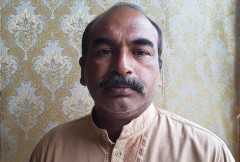 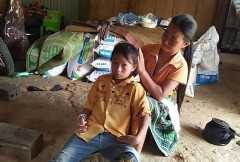 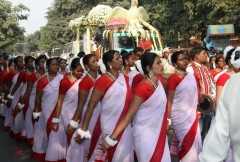 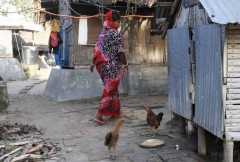