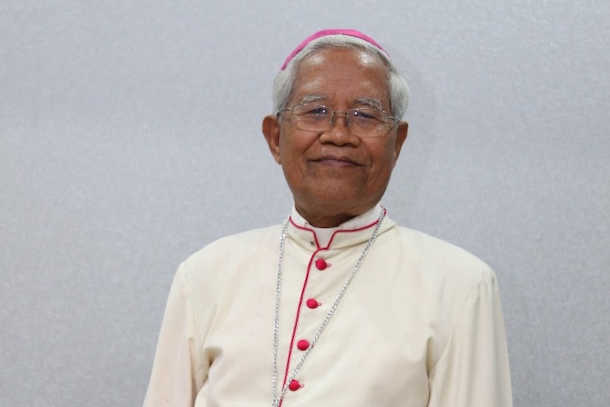 Retired Capuchin Archbishop Anicetus Bongsu Sinaga of Medan, who is based in the capital of Indonesia's North Sumatra province, recently published his biography, in which he details his spiritual journey from Malim, a local Indonesian pre-Islamic religion, to Catholicism.

Malim shares similarities with Islam, including the wearing of turbans and avoidance of pork products. It is a modern form of the traditional religion practiced by the Batak people, the largest ethnic group in North Sumatra.

The 77-year-old prelate, known as a champion of environmental causes, was born and raised in a family of Parmalim, or followers of Malim. His father, a farmer and palm wine tapper, was a Malim priest while his mother was a traditional healer.

Archbishop Sinaga said the religion praises and conveys prayers of supplication to Debata Mulajadi Nabolon, the god of great beginnings, opening it up to comparisons with Christianity.

"My father taught me about this religion and its prayers," the prelate told ucanews.com.

"Even after becoming a priest and a bishop, I still pray [its prayers] because they are not that different from Catholic prayers," he said.

This traditional belief system has over 30,000 followers, They are scattered in various pockets of Indonesia where the Batak people live.

The archbishop said his conversion was a gradual process.

It began after he met a Dutch missionary priest, Capuchin Father Beatus Jenniskens, who told him he could someday become a Catholic priest, too.

The young Sinaga never forgot those words and would later end up joining the priestly formation in a local seminary.

Unlike the majority of people who entered the seminary as baptized Catholics, Sinaga did not undergo this until the age of 17, in 1957, the same year his father also converted and was baptized.

He said it was easy for Parmalim to convert due to the overlapping religious practices and liturgical symbols.

For example, followers of Malim sacrifice a buffalo during the Sipaha Lima (fifth month) harvest festival, the most important date on their religious calendar.

They believe the blood of the sacrificed animal purifies them from their sins, a practice clearly analogous with the sacrificial lamb of Christianity.

The fourth child of five siblings, Sinaga entered the Capuchin novitiate in 1963 and was ordained priest six years later.

He completed his doctorate degree in moral theology at the Catholic University of Leuven, Belgium in 1975, and titled his dissertation, The Toba-Batak High God: Transcendence and Immanence.

In 1979, he was appointed the Apostolic Prefect of Sibolga Diocese in North Sumatra. Pope John Paul II ordained him as a bishop at the Vatican in 1981.

Sinaga became Archbishop of Medan in 2009, a position he held until he retired last year. Capuchin Archbishop Kornelius Sipayung officially replaced him on Feb. 2.

Medan Archdiocese has 532,000 Catholics from several ethnic groups, including Batak, spread among 56 parishes.

Even though he has officially retired, Sinaga still serves as the Apostolic Administrator of Sibolga Diocese following the death of Bishop Ludovicus Manullang in September.

Archbishop Sinaga said he likes to incorporate elements from the Malim religion into his services both to preserve them and add value for Catholics.

"I want my archdiocese to follow the teachings of the Second Vatican Council, to proclaim the Gospel to all people, and to pay attention to local cultural values, including portraying local color in church buildings," he said.

He often wears traditional Batak clothing while preaching and delivers homilies in the Batak language. Some of the churches in his archdiocese have even been built in the architectural style favored by this ethnic group.

He said his experience of crossing over from one religion to another also helps him engage in positive dialogue with people from other religions.

"Although the Catholic Church is facing challenges, it must continue to be a part of a solution to the problems Indonesia is dealing with, rather than a part of the problem," he said, referring to the rise of extremism and the need to tamp down religious intolerance.

With that in mind, fostering ecumenism and interreligious dialogue are top priorities for Archbishop Sinaga, especially considering how Catholics rank as a minority in Medan Archdiocese.

Portuguese merchants introduced Catholicism to North Sumatra in the 7th century, but it was Capuchin Father Sybrandus van Rossum, a Dutch missionary who arrived in late 1934, who began spreading the word among the Batak people, according to historical records.

Now ecumenism and interreligious dialogue have been woven into the social fabric of Medan, where Christmas and Easter is celebrated with much fanfare and Catholics and Protestants enjoy close ties.

There are even immersion programs where Catholic priests sleep in the houses of Protestant pastors to know one another better, he said.

"In the beginning, there were some obstacles but now things work very smoothly," recalled Sinaga, who once led the Office of Ecumenical and Interreligious Affairs of Federation of Asian Bishops’ Conference.

On March 15, 2018, he signed a Memorandum of Understanding with 13 churches in North Sumatra to find ways of moving ecumenism away from conflict and toward communion.

He also frequently visits Muslim communities and clerics, particularly during Eid al-Fitr, an important religious holiday that marks the end of Ramadan, the month of fasting. This year it falls on June 4-5.

Archbishop Sinaga has garnered respect from interreligious leaders at both the local and national levels.

Reverend Soritua A.E. Nababan, former chairman of the Communion of Churches in Indonesia, praised his close ties with the Protestant Church in North Sumatra.

"The bishop has good relations with all denominations," he said. "This makes it easy for them to cooperate, to witness and proclaim the Gospel to all people."

Said Aqil Siradj, chairman of Nahdlatul Ulama, the biggest Islamic organization in Indonesia, said Sinaga has played a crucial role in bridging differences between the Muslim and Christian faiths.