A personal pilgrimage to pray with Pope Francis 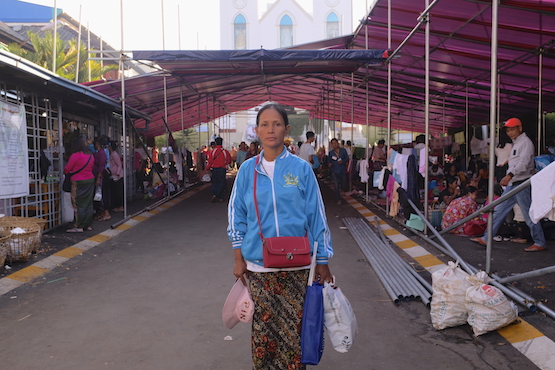 Maria Ja Taung, a displaced ethnic Kachin from St. Paul camp, was so concerned about her health she worried whether she could travel to Yangon to join a large open-air Mass led by Pope Francis last month.

But miraculously, Ja Taung’s nausea, coughing and headache disappeared and she managed to make the 24-hour bus trip from Myitkyina, the capital city of Kachin State to Yangon.

It was the first trip Ja Taung, a 46-year-old mother of seven, and some of her friends had made to Yangon.

Her four-day odyssey started on Nov. 26 when she left Myitkyina, located near the Chinese border, arriving in Yangon the next day, a trip of just under 1,200 kilometers, to greet Pope Francis on his arrival.

When they arrived at St. Anthony's Church, along with thousands of other ethnic Kachins, people were packed into the church compound already.

Ja Taung and her friends took an empty space near the gate and left their belongings as they rushed to the streets in Yangon to welcome the pope’s vehicle.

"The long, tiring journey ended with relief, joy and satisfaction when me and my friends got a chance to wave our hands when the pope’s convoy passed along the roads in Yangon on November 27," Ja Taung, a widow and mother of seven, told ucanews.com.

Ja Taung had planned well for their journey. As food is more expensive in Yangon, she brought enough for her three days in Yangon.

Financial planning, if humble, was needed as well. She raises pigs at the St. Paul camp for internally displaced people and had squirreled away enough every week to pay for the journey after she learned in August of the pope's planned visit.

A round-trip bus fare from Myitkyina to Yangon costs 76,000 Kyats (US$56) so Ja Taung was the only one in her family who could afford to go to the Mass. All her seven children wanted to go as well.

"I told my children that you are young and you may get an opportunity in the future. But I’m old and I may not get this chance next time, so let me go and get a blessing from the pope," she said.

Ja Tung made sure was going to experience all she could. At 8 p.m. on Nov. 28, after performing a traditional dancer in the morning, she and her friends  went to the Kyaikkasan sports ground in Yangon to make sure they had a good spot for Pope Francis' public Mass due to start at  8:30 a.m. the next day.

Around 10,000 ethnic Kachins participated in the Mass which the Church estimates over 120,000 Catholics and people from other religions attended.

"I couldn’t sleep the whole night in the sports ground," said ja Tung. "But I was filled with joy and peacefunessl when I saw the pope when he toured around the people before saying Mass."

"Our lack of sleep and tiredness went away after we joined Mass." After the Mass, around 10:30 a.m., she and her friends headed to a train station but became lost. They walked for hours before they met a Catholic priest who helped them get a taxi  back to St. Anthony's.

At the church they slept for hours before joining in an evening Mass.

Ja Taung fled from Gadayan village near Laiza, the headquarters of the Kachin Independence Army (KIA), when fighting intensified nearby in June 2011 and has taken refuge at St. Paul IDP camp since then.

"Hopefully the pope’s words will touch the hearts of all stakeholders so that they can negotiate to bring peace. I believe peace is possible," says Ja Taung.

Early morning on Nov. 30, Ja Taung attended the mass at St. Anthony Church where she and other Kachins stayed in Yangon and then she packed her clothes and belongings to return to her temporary home, the IDP camp, in Myitkyina.

"I don’t feel a financial burden, rather it was a blessing and rare opportunity to have an encounter with the pope in our own country," Ja Taung says.