With massive losses due to the coronavirus and cyclone, most people won't be in a festive mood 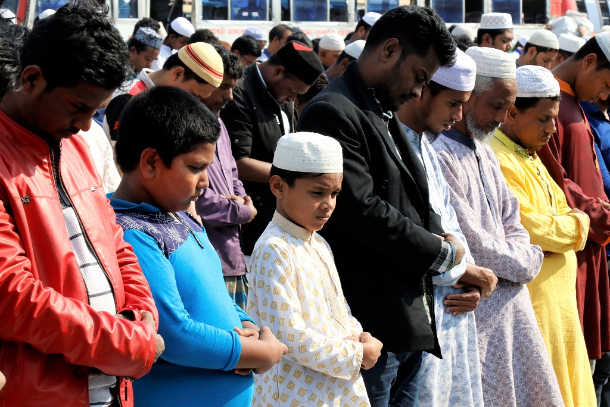 Muslims join a prayer at Tongi in Gazipur district near Dhaka on Jan. 17. Muslims in Bangladesh are bracing for a low-key Eid-ul-Fitr festival due to the Covid-19 pandemic. (Photo: Stephan Uttom/UCA News)

Anwar Hossain is a poor father of three who takes great pleasure in providing his children with new clothes and delicious foods at least twice a year — during Eid festivals.

Hossain, 39, is a rickshaw puller from Kushtia district in western Bangladesh. He is the sole breadwinner of a five-member family. He owns a small plot of land that provides rice for the family, while his meager income from pulling a rickshaw pays for other expenses including tuition fees of the children.

“Every year I save money ahead of Eid and I buy new clothes for children and some cosmetics for my wife and daughter. This year I am totally helpless and I cannot provide anything for them. It will be the most non-festive Eid of my life,” Hossain told UCA News.

The misery of this Muslim father stems from the impact of the Covid-19 pandemic. Like millions of poor and low-income people in this South Asian country, he has been suffering from a drastic loss of income since Bangladesh declared a nationwide shutdown and a ban on movement and gatherings to contain the deadly virus from March 26.

Hossain had savings of 14,000 taka (US$165) up until February. The money has saved his family during this prolonged crisis. But their problems intensified on May 20 when Cyclone Amphan struck and badly damaged their tin-shed house, forcing him to go out with his rickshaw to try to earn some money.

“I will need to fix the damaged house before Eid and I should try to give something to my children,” Hossain said.

Eid-ul-Fitr, celebrated at the end of the holy month of Ramadan, is one of the two important festivals in Islam. This year Eid-ul-Fitr will be celebrated on May 24 or 25, depending on the sighting of the moon.

Sultan Ahmed, 65, a clothes trader at Dashuria market in Pabna district in the north, is also bracing for a gloomy Eid.

Ahmed is a father of five sons, and his business is the only livelihood for his family. The shop was shut for two months, only reopening recently. Sales have been extremely low with few customers.

“We have a 10-member family and during Eid I give clothes to everyone. In addition, I distribute free clothes and cash to about 50 poor people. Everything has scrambled now,” Ahmed told UCA News.

Muslims, mostly followers of moderate Sunni Islam, make up about 90 percent of more than 160 million people in Bangladesh. Hindus account for about 8 percent, while the remainder belong to other faiths including Buddhism and Christianity.

Despite a recent rise in radicalism, the nation has long been known as a land of pluralism and harmony where all major religious and cultural festivals cut across faiths.

During festivals like Eid, Puja and Christmas, it is very common for people to greet each other and celebrate together in urban and rural areas. During Eid, people enjoy holidays ranging from three to seven days.

A gloomy Eid is also a cause of upset for non-Muslims in Bangladesh.

Nayan Halder, 50, is a Hindu and NGO officer in Satkhira district in the south. Over the past 12 years he has never visited his home in Barishal district during Eid holidays.

“I get invites from Muslim colleagues, friends and beneficiaries, and it gives me immense joy. This year, with massive losses due to the coronavirus and cyclone, most people won’t be in a festive mood and I sympathize with them,” Halder told UCA News.

Satkhira, near the Sundarbans mangrove forest and Bay of Bengal, is known as one of the poorest districts in Bangladesh, largely because the area gets battered regularly by natural disasters like cyclones and tidal surges. It has been hit hard by Cyclone Amphan as well.

“The coronavirus has made the poor even poorer. The cyclone smashed houses, destroyed crops and fisheries, and made many penniless. They are not in Eid mood and I feel sad to see their plight,” Halder added.

Subroto Gomes, 34, is a Catholic and banker in Dhaka. He has a number of Muslim and Hindu friends from his student days.

“In Bangladesh we celebrate religious feasts together. I invite my friends during Christmas and they too invite me during their festivals. But this time I have not received any Eid invitations. I know the reality and I feel sad for my Muslim friends,” Gomes told UCA News.

However, Gomes has decided to do something for poor Muslims in his neighborhood ahead of Eid. “I think I can help at least 10 poor Muslims with some support, so they can at least eat something during this festival,” he said.

There are also individual and institutional programs to help the poor ahead of Eid in the form of zakat (Islamic donations).

Bidyanondo Foundation, a Dhaka-based voluntary organization which rose to prominence for nationwide relief programs for the poor during the pandemic, has formed a zakat fund and distributed over 8 million taka to poor Muslims.

Saddened by the plight of the poor during the pandemic, Prime Minister Sheikh Hasina declared a special Eid gift package for five million families in Bangladesh.

On May 14, Hasina launched a cash handout of 2,500 taka for each family to be distributed through mobile banking. The scheme includes poor and low-income people including rickshaw pullers, day laborers, construction workers, fishermen and farm workers.

Rickshaw puller Anwar Hossain complained that he deserved the handout but nobody came to him to enlist his name.

“People with connections to the ruling party will get this support. Poor people like me are overlooked. They will have to make up for themselves,” Hossain said.