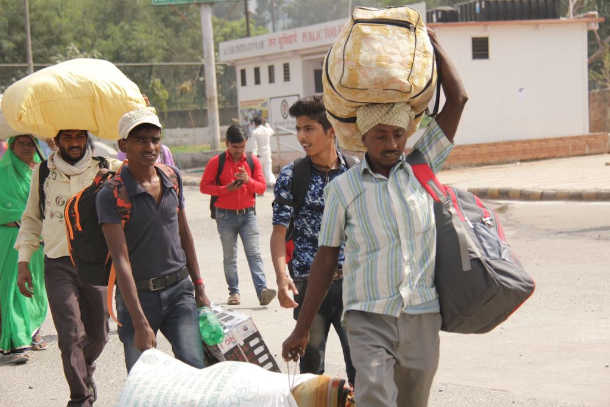 Migrant workers in Delhi head to a railway station to return to their villages during the annual Chhath Puja (Worship of Sun God) festival in November 2019. (Photo: Bijay Kumar Minj/UCA News)

Church leaders and activists have given a mixed reaction to the Indian government’s decision to allow the movement of migrant workers, pilgrims, students and tourists stranded in various states due to the nationwide coronavirus lockdown.

The Ministry of Home Affairs on April 29 issued a circular to states and union territories allowing these people to move according to guidelines.

Indian Prime Minister Narendra Modi on March 24 ordered all the country’s 1.37 billion people to stay inside their homes for the next 21 days to try to beat the coronavirus, triggering a mass exodus of migrant workers. Later the lockdown was extended to May 3.

“Indeed, it is a welcome step and great relief, not only for the migrant workers who are suffering physically and mentally but also for their families back home who have been worried about their well-being,” Father Jaison Vadassery, secretary of the Conference of Catholic Bishops of India (CCBI) commission for migrants, told UCA News.

“Though it is quite late, it is better than living in anxiety and uncertainty, living every day a fearful life — fear of losing jobs, lives, away from home. At least now they will be with their families.

“But the government has to make sure that they are properly taken care of while exiting from one state to another. It is a huge task and I am a bit worried about how this could be executed because the number is too big and transporting them by buses would not be easy.”

Hundreds of thousands of migrant workers are stranded in shelter homes far away from their home states.

Father Vincent Ekka, who heads the department of tribal studies at the Indian Social Institute in New Delhi, said the government’s move is “too little and too late” because many migrants have died from hunger and disease while trying to walk to their home states.

“It looks like the government is doing it only for the formalities as now it has realized that it has failed to take appropriate steps to cope with the problem. It is a step to hide their failures,” he said.

“It should have been done at the beginning when the country reported the arrival of Covid-19. By delaying, it has created more chaos among migrant workers.”

Nicholas Barla, coordinator of Adivasi Samanvay Manch Bharat, which mediates on tribal issues with authorities, told UCA News that the organization had written to PM Modi on April 26 asking for the safe exit of migrant workers stranded in different states.

“Our letter highlighted the plight of migrant workers. It said most migrant workers are stranded in groups and unhygienic places. Their resources for survival have practically dried up and they are at the point of starving, which might invite further calamities besides coronavirus,” he said.

“We hope and pray that migrant workers may reach their respective destinations safely after the new direction from the federal government.”

According to the April 29 circular, all states and union territories should develop standard protocols for receiving and sending migrants.

Migrants will be screened and those found without coronavirus symptoms will be allowed to proceed. Buses used for transporting people will be sanitized and follow safe social distancing norms for seating.

When migrants reach their respective states, they will be assessed by health authorities and put under home quarantine and, if required, under institutional quarantine.

About nine million people migrate from one Indian state to another each year, according to the Economic Survey of India 2016-17. That figure was nearly double the rate of interstate migration recorded by the 2011 national census.