A 'horrible' year all round for Malaysians 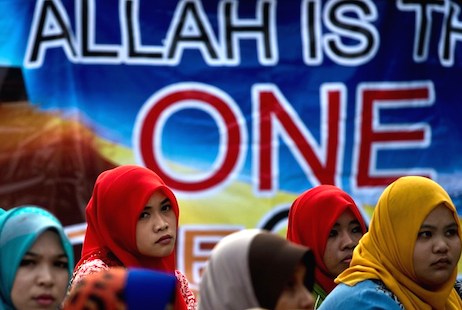 Muslim activists protest against Christians using the word 'Allah' outside Malaysia's highest court in Putrajaya in this 2014 file photo. (Photo by AFP)

The Latin phrase annus horribilis ("horrible year") probably best describes 2015 for most ordinary Malaysians, the nation's prime minister, Najib Razak, and the coalition that has ruled the country since independence in 1957.

It most definitely will not be a year many will look back on with pleasure.

While most Malaysians focused on tightening their belts as a result of an economic downturn, authorities pressed ahead with policies cementing racial and religious supremacy for Muslims and curbing minority rights.

Along with a growing threat from radical Islam, land reclamation by China in the South China Sea — which has turned submerged reefs into islands — has sparked jitters in the region.

If this was not enough, Prime Minister Najib Razak stands accused of shifting nearly $700 million from a government-owned development fund into his own private bank accounts.

The fund, 1Malaysia Development Bhd (1MDB), is under investigation in Malaysia, the United States, Singapore, Abu Dhabi and Switzerland. Opposition leaders in parliament filed a formal no-confidence vote against him in October.

The scandal has caused a crisis in his government and in his United Malay National Organization.

Najib and his party, in trying to halt a slide in their political fortunes first felt after losing the popular vote in 2013 elections, have resorted to fanning fears that Muslims will lose political power to voters of other faiths if they do not support his party.

The result has been an increase in hate-mongering and inflammatory statements against minorities with branches of government adopting policies that promote only the Muslim community.

Pushing a more Islamic agenda is mostly politically driven and if this year is anything to go by, next year could become more oppressive.

News that hit the headlines this year:

— The year began unhappily for minorities and the marginalized when Malaysia's top court ruled that non-Muslims could not use the word "Allah" for God. The decision was seen as kowtowing to the country's intolerant and extremists.

— Opposition leader Anwar Ibrahim's sodomy conviction was upheld and he began a five-year jail term. Anwar, a former deputy prime minister, called it a "political conspiracy." The United States and the United Kingdom expressed concern over the Federal Court's decision. Both countries said Anwar's case raised questions about the independence and fairness of the judiciary, and rule of law in Malaysia.

— Popular cartoonist Zunar was arrested for poking fun at the court ruling.

— A state legislative assembly unanimously passed the Shariah Criminal Code II Enactment 1993 (Amendment 2015). Pan-Malaysian Islamic Party (PAS) allies in the opposition alliance — the Democratic Action Party and People's Justice Party — said they would not support the bill in parliament and it is now unclear if PAS will remain in the coalition. PAS's hudud law creates two sets of laws, one for Muslims and another for non-Muslims, and includes stoning to death as a punishment.

— The Goods and Service Tax announced by the government in 2014, came into force on April 1 sending the price of goods and services soaring by 10-30 per cent.

— Accusations of playing "human ping pong" were leveled at the government when boatloads of Rohingya Muslims from Myanmar were turned away.

— Police found human "cages" and mass graves in camps run by human traffickers in the jungle along the Thai border. Hundreds of bodies were feared buried in the graves and residents near the sites told the international media that police and local politicians were complicit in people smuggling. A Malaysian Muslim man sits amid coffins in a pit during the re-burial of remains believed to be those of ethnic Rohingya found at human-trafficking camps in the country's north, at Kampung Tualang some 16 kilometers east of Alor Setar on June 22. (Photo by AFP)

— Eighteen people were killed on Mount Kinabalu after an earthquake rocked the region.

— Malaysia called for an international tribunal over the MH17 crash in the Ukraine as debate continued over who shot down the Malaysia Airlines plane in July 2014. All 298 people on board died.

— Premier Najib sacked his deputy Muhyiddin Yassin as well as his attorney-general amid the 1Malaysia Development Berhad (1MDB) scandal fallout. Muhyiddin has been critical of Najib's handling of the scandal. A deputy public prosecutor said to have been preparing charges against the prime minister disappeared and was later found murdered.

— "The Edge" newspaper which had been reporting on 1MDB saga was suspended for three months while the Sarawak Report, an overseas activist website that also published a series of exposes on the scandal, was blocked.

— In a blow to blow to freedom of expression, the country's top court ruled that state laws can trump the Federal Constitution and its guarantees in matters concerning Islam.

— Police issued an arrest warrant for Clare Rewcastle Brown, the sister-in-law of former British premier Gordon Brown over allegations she made about Najib role in the 1MDB scandal. The attempt to circulate the warrant internationally was turned down by Interpol.

— Wreckage from missing Malaysian Airlines flight MH370 was found on Reunion Island but victims' relatives were dismissive of the way officials have handled investigation into the missing plane. Local ecological association members and volunteers carry debris found Aug. 11 in the eastern part of Sainte-Suzanne, on France's Reunion Island in the Indian Ocean, during search operations for the missing MH370 flight conducted by French army forces and local associations. (Photo by AFP)

— The New York Times reported that a U.S. federal grand jury was examining graft allegations involving Najib and individuals close to him.

— The U.S. embassy warned American citizens to avoid a popular tourist street in Kuala Lumpur because of a credible threat regarding a potential terrorist act.

— Malaysia closed schools due to smog from annual fires started in Indonesia to clear land. The haze shrouded parts of Malaysia and Singapore for about a month and also spread north to Thailand.

— Suspected Abu Sayyaf militants beheaded a Malaysian businessman they had taken hostage in May. The severed head of Bernard Then, who was kidnapped from a seaside restaurant in Sandakan in Sabah state, was discovered in Jolo, Philippines on Nov 18.

— U.S. President Barach Obama paid a three-day visit to Malaysia for the ASEAN summit where he was put under pressure to bring up Malaysia's dismal human rights record.

— A Malaysian diplomat pled guilty to indecent assault in New Zealand. Muhammad Rizalman, a former military attache who assaulted a woman in her flat while he was almost naked, was initially charged with indecent assault, assault with intent to commit sexual violation and burglary.

— Malaysia announced it would join the Trans-Pacific Partnership, a new international economic agreement that would lock in trading relationships with 12 countries including the United States, Japan, Canada and Australia.

— Parliament pushed through a controversial National Security Council bill that grants extraordinary powers to the prime minister. Legal experts say the bill is unprecedented in its range and paves the way for the government to take control of the military and stay in power forever.

— In further evidence that the government will not tolerate criticism, a former law minister was charged with attacking the premier in a blog posting.