Bishop John Hsane Hgyi provides food and other items to administrators at the government-run quarantine center at the University of Pathein on July 16. (Photo: Pathein Diocese's social communication office)

On a recent sunny morning, Bishop John Hsane Hgyi joined church social workers to give moral and nutritional support to people quarantined for 21 days in a government-run center.

The bishop, who leads Pathein Diocese’s Covid-19 response team, encouraged the people, mostly Buddhists, to have patience during their three-week stay.

The program was organized by Karuna (Caritas) Pathein, a branch of Caritas Myanmar Mission Solidarity (KMSS), on July 16 at the University of Pathein, where some 100 returnees from Thailand have been quarantined.

“He [the bishop] stressed that the aim of coming to the center was to give moral support and urged the returnees not to let their minds get down and try to become good citizens,” said Father Henry Eikhlein, who was part of the group.

The 67-year-old bishop said the government has been trying hard to tackle the pandemic and has prevented the situation in Myanmar from getting worse.

The church team provided the quarantined people with food and items to protect against the coronavirus. Young members of Karuna Pathein sang songs while one played a keyboard.

Father Eikhlein, socio-pastoral program coordinator of Pathein Diocese, said the visit was part of the Church’s response to Covid-19 and to show love and solidarity with the returnees.

He said Karuna Myanmar is playing a leading role in running awareness campaigns and providing food, non-food items and preventive support to places including quarantine centers and hospitals.

Cardinal Charles Bo of Yangon has led the Church’s national coordination team on Covid-19 that prioritizes prevention and awareness campaigns as well as offering quarantine centers in dioceses across the country.

St. Joseph’s National Catholic Major Seminary in Yangon, other seminaries and church facilities in Mandalay and Banmaw in Kachin state have been used as quarantine centers for returnees from Thailand and China. 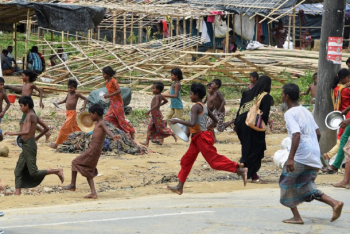 Churches remain closed and services have moved online for Sunday Masses as the government has extended Covid-19 measures to July 31 to contain the spread of the virus.

In various dioceses in the Buddhist-majority nation, diocesan teams and religious institutions have continued to provide food and other items to the most needy. A Catholic social worker from Pathein Diocese sings songs to returnees from Thailand during an outreach program at the University of Pathein on July 16. (Photo: Pathein Diocese's social communication office)

In Lashio Diocese in Shan state, a team joined Karuna social workers to give food to orphanages.

Eddie, program manager of Karuna Lashio, said they have provided food items such as rice and cooking oil and preventive items including face masks to 39 orphanages run by the Catholic Church, Baptist Church and Buddhist monks.

Cardinal Bo said religious, Catholic business people and dioceses have broken bread with the hungry in the slums, IDP camps and villages through supplying food to thousands of people.

“Our doors are open to brothers and sisters in need of isolation or quarantine. Being a small church has not deterred us from reaching out,” he said in a homily on May 17.

More than 21,000 people have been quarantined in about 3,000 quarantine facilities across Myanmar, according to the Ministry of Health and Sports.

The report said that, as of July 16, a total of 130,817 migrants have returned to Myanmar from Thailand, China and Laos. A further 8,543 Myanmar nationals have returned via government-assisted relief flights from various countries including Australia and the United States.

Myanmar has so far reported 343 cases of Covid-19 including six deaths and 282 recoveries, according to health officials.

According to the latest data, 632,178 people have died out of more than 15 million confirmed cases worldwide.