Holy Cross Sister Salome Nanuar, a nun from St. Joseph Catholic Church in Sylhet Diocese of Bangladesh, credits advancement in her life to the support from the local Catholic Church. (Photo by Rock Ronald Rozario/ucanews.com)

As a child Salome Nanuar assumed she would end up becoming a poor and marginalized tea estate worker like her parents.

She was born in 1971, the third of six children of an ethnic Kharia family, at Barmachhera village at Srimangal, a tea plantation hub in the Moulvibazar district of northeastern Bangladesh.

Nearly five decades on, Salome has become a Holy Cross nun, dedicating her life as a teacher, catechist and hostels, in the service of socio-economically downtrodden communities, including tea workers.

Sister Salome’s father died when she was at grade four in primary school.

Thanks to support from her two elder brothers and sister in-laws, all of them tea workers, she was able to continue her education. The Church runs dozens of primary schools covering 78 tea estate villages and punjis (forested villages) for children of tea workers, as well as other ethnic communities.

Sister Salome had her primary education up to grade five at the church-run village school, the oldest among such facilities in Srimangal.

“Without the Church’s support I could never have gotten an education, let alone become a nun,” Sister Salome told ucanews.com. “Conditions in the tea workers’ community have improved over the years because the Church has supported them immensely.”

After finishing primary education, the Church assisted Salome to study at a school in central Dhaka district up to grade 10, when she discovered her religious vocation.

She entered the Holy Cross congregation in 1989 before becoming a nun by professing her first religious vows in 1992 and her final ones six years later.

Her nephew, Pius Nanuar, obtained a master’s degree in English and has been a regional manager of the Catholic charity Caritas Sylhet since 2010. He is also a youth activist, credit unionist and advocate for the rights of the tea workers’ community.

“The Church’s support was vital for my life’s advancement,” Pius, 36, a father of three, told ucanews.com

In Srimangal, success stories like that of Sister Salome are aplenty and they are often linked to the advent and growth of Christianity, especially the Catholic Church in the region.

Christians in the Sylhet existed during British rule in the Indian subcontinent and particularly since 1850s, when the British government started tea plantations in the area.

The British enticed tens of thousands of lower-caste Hindus as well ethnic indigenous peoples from various Indian states to work on the tea estates.

Despite being a vital industry for nearly two centuries, tea workers are one of the most exploited and marginalized communities in Bangladesh. A female tea worker wraps up her days work at a tea estate in Srimangal, a tea plantation hub in northeast of Bangladesh. (Photo by Rock Ronald Rozario/ucanews.com)

A tea worker’s daily wage in 102 taka (US$ 1.20), one third of the daily wage of a farm worker. The former also receives a meager weekly ration of just three kilograms of food and the health facilities available are almost non-existent.

Workers reside in mostly one-room squalid, mud-walled thatched houses provided by the company but only as long as they have jobs. Most lack the skills to find alternative employment — the authorities discourage them from getting an education — so they realistically are in no position to quit their jobs.

Various ethnic communities, including the Garo and Khasia people, migrated to the area from the Indian state of Meghalaya.

Many ethnic people, including Sister Salome’s father, became Christian even before their migrations.

Before the 1947 partition of India and Pakistan, Catholic priests served Christians at a parish in Assam state, northeastern India.

The area came under the jurisdiction of the Dhaka Archdiocese before Sylhet became a new diocese in 2011.

The Church in Srimangal has more than 12,000 Catholics spread over 105 kilometers of Moulvibazar and Habiganj districts.

The Church grew up and survived thanks to the spiritual and financial support of foreign and local Holy Cross missionaries, which continues today.

For nearly seven decades, the Church has offered spiritual care to the faithful, plus pastoral, social, economic and health services to all, says Holy Cross Father Digonto Chambugong, the assistant parish priest.

“Following in the footsteps of great Holy Cross missionaries, three priests with religious brothers, nuns and catechists have been serving people to ensure their integral development,” he said.

“The Church set up schools and hostels in every village to help children to get an education, and tried to support people in times of crisis, including land problems and evictions. Thus, we have educated and established people from these communities.” The Catholic Church is Srimangal has three secondary schools and six hostels, catering to both Christian and non-Christian students.

The largest among these is St. Marcellin School set up in 2017 and run by Marist missionary brothers at Giasnagar, about 10 kilometers from Srimangal town.

The religious order arrived in the diocese in 2011 and also set up hostels for students in an area surrounded by tea estates.

The tea workers’ poor, slave-like conditions attracted Marists to start a mission to help them get out of a “black-hole” situation, says Spanish Marist Brother Eugenio Sanz, chairperson of the school.

“Our plan is to give dignity to people. It is not about knowledge or mathematics or English, but dignity to people who deserve it. This is our small drop of water in this ocean of people in need, to help them come out of an outcast situation,” Brother Sanz told ucanews.com.

The four-storied school started with 95 students three years ago and now has 240 students from 38 different ethnic and religious groups, including Christians, Muslims and Hindus.

The school will complete a fifth floor next year and expects to offer education to about 500 students.

It runs mostly on donations from overseas, but the Marists want it to get government recognition and financial support in future.

“The children don’t have money to pay for classes, so we rely very much on the solidarity of other people from the overseas,” says Brother Sanz. “Government recognition and support will reduce our burden from seeking money abroad to pay the teachers.”

He says the school has already become a melting pot of various ethnicities, cultures, languages and religions. 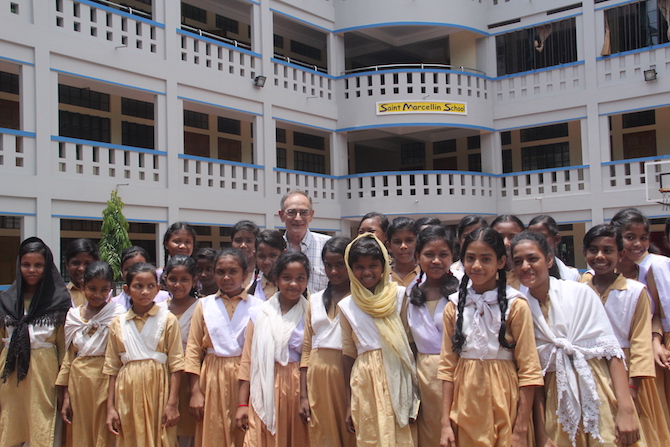 Besides offering loans for various purposes including agricultural enterprises and small businesses, it has also taken initiative to address land problems of the members.

In recent years, the cooperative purchased 1.89 hectares of land near Srimangal, designed plots and distributed it among members.

Currently, it has 95 decimal (0.39 hectares) of purchased land being processed for the same purpose.

“We took this initiative to address people’s problem with land. Tea workers have no land of their own and Khasia punjis are also mostly leased properties, so this is a way out,” Rony Sarkar, manager of the cooperative, told ucanews.com

Convincing low-income tea workers to get involved in the cooperative was challenging, he says.

“People were unwilling and hesitant because they had no idea about the cooperative, so we visited villages to convince people. In future, we want every Catholic family to be involved with it for their economic development,” he added.

Sylhet Diocese still has only three local priests, so to fill the void of religious vocation, the diocese opened the St. John Minor Seminary in 2018.

“This is my personal mission,” the priest told ucanews.com. “I think I am discovering freshness for myself and I am teaching my seminarians that the Church is like a house; we are all like bricks and Jesus joins us together in a beautiful way. So, we can become a house for everybody.”