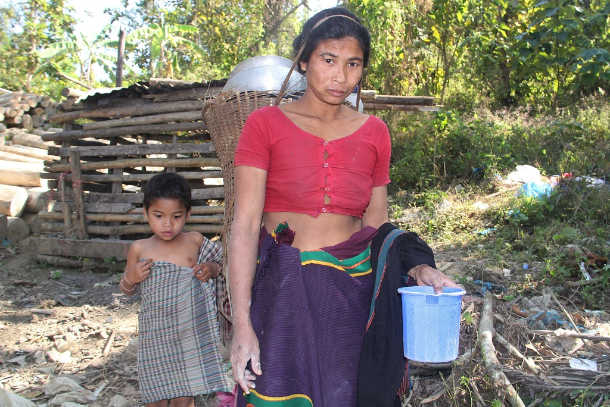 For more than three decades, Mrinal Chakma* has carried the pain of losing his elder brother in deadly sectarian conflict in Longadu in Rangamati district of southeast Bangladesh.

The area is part of the Chittagong Hill Tracts (CHT), comprised of three hilly, forested districts — Rangamati, Bandarban and Khagrachhari — which make up the country’s only mountainous region bordering India and Myanmar.

“I was an eight-year-old and witnessed how my brother was brutally hacked to death and my mother narrowly survived hacking. A number of neighbors perished in arson, machete attacks and shootings,” Mrinal, 39, an ethnic Chakma, told UCA News.

Mrinal’s recollection is a small picture of a deadly attack on ethnic Chakma villages carried out by Bengali Muslim migrants, known as settlers, with the backing of members of the Village Defense Party (VDP), a law enforcement group, back in 1989.

Remembered by locals as the “Longadu massacre,” the violence from May 4-6 left about 50 indigenous Chakma dead and scores injured, with many forced to flee the area fearing death.

It started with the murder of Abdur Rashid, a Muslim settler, on May 4 by unknown assailants. Though it was never established whether any ethnic individual or organization had any involvement in the killing, local Muslim leaders, backed by the VDP, pointed the finger at the Chakma community.

Thousands of settlers, armed with sharp weapons, stormed Chakma villages. Dozens of houses were razed to the ground in arson and villagers brutally attacked in the mostly one-sided violence.

“Like me, many families lost members. There were some protests, but no justice was done. Yet people still remember the days of the massacre and pray for the victims,” said Mrinal, a Buddhist and human rights activist.

Many victims and their family members have died and those who are alive have lost hope for justice, he lamented.

Imtiaz Mahmood, a Supreme Court lawyer and rights activist, believes the Longadu massacre was the fatal result of a flawed demographic policy of military governments since the late 1970s.

“The hidden agenda behind the transfer of tens of thousands of Bengalis to the hills was intended to make ethnic people a minority in their own land. Longadu was one of the areas that experienced a mass influx of settlers,” said Mahmood, a Bengali Muslim himself.

His family resided in Longadu in the 1980s as his father was a senior government officer.

“We had a very good relationship with Anil Bihari Chakma, a local Chakma village leader and popular politician. Anil’s family was among the first victims of the massacre and his wife was shot and hacked to death,” he recalled.

Mahmood says he is still ashamed of the deadly violence. “As a part of a Bengali-majority country, I must bear some responsibility for the attack. I cannot escape the blame for such brutal violence and heinous injustice against those people,” he added.

The Longadu massacre is largely forgotten but its after-effects are still felt strongly, said Rajib Chakma*, a journalist and political analyst based in Bandarban district.

The violence gave birth to a strong student movement, Pahari Chhatra Parishad (PCP or Hill Students Council), and Rajib was one of the first members.

“Students held protest rallies and issued memorandums demanding justice, but nothing was done — no case, no investigation and no trial at all. This denial of justice for one of most violent attacks on the hills encouraged the perpetrators and as a result more such sectarian violence occurred in the following years,” Rajib, a Buddhist, told UCA News.

Rajib agrees with Mahmood's assessment of long-running troubles in the hills due to flawed state policies.

“The CHT had a political problem that required a political solution, but it didn’t happen. Starting in the late 1970s, military regimes sought to solve the crisis with military policies, which has failed completely and the CHT still remains a restive region,” he added.

Military and civil governments have looked at the CHT problems from economic, military and security perspectives, but it was not properly addressed politically, he noted.

The break-up of Pakistan in 1971 and Myanmar's mishandling of the Rohingya issue are examples of how things get out of control without a desired political solution.

The culture of impunity that exists in the hills should end, said Francis Tripura, an ethnic Tripura Catholic and secretary of the CHT Regional Pastoral Team of Chittagong Archdiocese.

“There has been much violence and many killings in the hills, and the Longadu tragedy is one of them. The culture of impunity must end and justice should be ensured for the sake of peace,” Francis told UCA News.

Catholic missioners evangelized in the CHT in the 1950s. Today, two-thirds of about 32,000 Catholics in Chittagong hail from ethnic communities.

A beautiful but restive region

The CHT is a popular tourist destination thanks to its smoky hills, lush green forests, natural lakes and springs.

For decades, the CHT has been a remote region and home to about 25 indigenous groups, mostly Buddhist and governed by three kings or circle chiefs, who were recognized by British rulers when the Raj annexed the region in the 1860s.

During the 1947 partition of India and Pakistan, ethnic communities were divided over joining either side, although the territory was allocated to Muslim-majority Pakistan.

Following Bangladeshi independence from Pakistan in 1971, due to a lack of political and economic empowerment on the hills, a secessionist movement bubbled up.

In response, the military was deployed and “Operation Dabanol” (Wildfire) was launched.

More than two decades of bush war claimed hundreds of lives on both sides until it came to end with the signing of the CHT Peace Accord 1997 between the government and PCJSS.

A faction of the PCJSS opposed the accord and broke away to form another party, the United Peoples Democratic Front (UPDF).

More than two decades after the accord, the region is still heavily militarized, land dispute resolution has made little progress and empowerment of ethnic community has been limited.

While sectarian clashes are still rife, the PCJSS and the UPDF continue to fight and kill opponents regularly.

“The Longadu killing was a warning, but the lessons were not learned. Flawed state policies and poor implementation of the Peace Accord have made things go from bad to worse in the CHT today,” Rajib Chakma said.