The country's gays are once again a victimized minority India last week renewed an instrument to victimize a minority group.  The Supreme Court has ruled to recriminalize homosexuality making it punishable by up to 10 years in prison.

India’s conservative social, religious and political groups petitioned against the ruling. They wanted to keep the archaic law drafted by Lord Macaulay, the British member of the Supreme Council of India in 1860, banning “heathen customs” and outlawing any “carnal intercourse against the order of nature.”

The Supreme Court ruling has cut short a temporary relief by the Delhi High Court meaning that homosexuality is once again being treated as an unnatural act and hence a crime in India.

The Delhi High Court ruling had ushered in a sense of dignity to gay people who did not have to take recourse in subterfuge meetings in dark alleys or anonymous contact through the internet.

People began talking about homosexuality in the open, were allowed to be different – and were respected for it. Pride parades, even in smaller cities like Hyderabad which celebrated its first parade this year, began to take place.

Meanwhile, Bollywood and news media showed a sense of maturity with unprejudiced and non-ridiculing attitude towards gay people.

But the Supreme Court’s move to recriminalize homosexuality once again condemns gay people to a vicious circle of self-negation and further exposes them to disease, ridicule, social stigma, abuse and discrimination.

While it may be argued that the law in recent times has been sparingly used, given the climate of injustice prevailing in the country, gay people will nonetheless be subject to harassment and persecution.

India is notorious for its unjust structures. There are numerous groups that have been subjected to the vilest of torments. The Dalits or former untouchables, the lower and backward castes, even women and girls all suffer from a society-tolerated – if not sanctioned – prejudice against them. 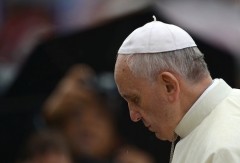 Indian cardinal speaks out against ban on homosexuality

India has had to turn to new laws to enable such people to live quality lives with dignity. There has been the law against sati, child marriage, allowing widows to remarry, abrogating untouchability. Hence, by not ratifying a lower court’s verdict, the Supreme Court is taking a step backward and missing an opportunity to right an enormous historic wrong.

As a Catholic, I take great pride in our current religious leadership for being non-judgmental and mature. We have Pope Francis to thank for his loaded comment: "If a person is gay and seeks God and has good will, who am I to judge?”

Also, when the pope was asked if he approves of homosexuality, he replied with another question: “How does God look at someone who is gay? Does God look at his existence as something that should condemn him to eternal damnation?”

In other words, I would think, despite what the theological or moral aspects to denouncing homosexuality, the fact remains that gay people are human beings too and that God resides in all of us, gay and non-gay.

Cardinal Oswald Gracias, president of the Catholic Bishops’ Conference of India, made this a bit clearer when he said that “the Catholic Church has never been opposed to the decriminalization of homosexuality, because we have never considered gay people criminals.”

He also pointed out that “as Christians, we express our full respect for homosexuals.”

Even though the Catholic Church is opposed to the legalization of gay marriage, it teaches that homosexuals have the same dignity as every human being while condemning all forms of unjust discrimination, harassment or abuse, said Cardinal Gracias, a member of a council of eight advising Pope Francis on reform.

Justice GS Singhvi, the head of the two-judge Supreme Court bench, said in his ruling that it was up to parliament to decide. But with general elections imminent, new legislation is highly unlikely anytime soon. That is because no one wants to be seen as taking a risky step in conservative India with a general election on the horizon.

While the present Congress Party-led federal coalition might be open to legislatively nullifying the Supreme Court ruling, the vociferous backing of recriminalizing consensual gay relations by the main opposition Bharatiya Janata Party will make that difficult.

BJP president Rajnath Singh has said in no uncertain terms that homosexuality is an “unnatural act.”

By contrast Rahul Gandhi, vice president of the Congress Party, was reported to have said: “My personal view is that these are matters of personal freedom and I think I would agree more with the High Court."

Sonia, his mother and the party’s president, has already spoken of an "inclusive and tolerant" Indian culture while supporting gay rights.

The proverbial silver lining in all of this is that homosexuality, once a taboo subject in India until even a few years ago, has now become a topic for discussion by people both political and religious. This will be seen as a small but sure step towards a more egalitarian society even though many may say India has fallen short of taking a more concerted stand, and acting on it.

Ivan Fernandes is a journalist and commentator based in Hyderabad.