A different approach, but the goal is the same

Lenten sacrifices are different in Korea 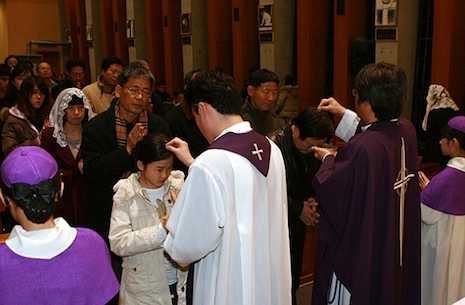 Catholics in Seoul attend Mass on Ash Wednesday, the start of Lent

The Lenten season in Korea, much like everywhere else, is a time for reflection and sacrifice as Christians consider the passion and death of Jesus Christ.

Korean Christians make commitments to abstain from habitual or much loved pleasures as a way of participating symbolically in Christ’s sacrifice.

Cho Sang-hyun is a man of admittedly simple pleasures, but he says this year he decided to go without his beloved ramen noodles – a small sacrifice to be sure compared to others, but one made with great sincerity.

Cho teaches mathematics at a private school in the capital, and after a long workday and a crowded commute, he arrives home hungry and with little time to plan complicated meals.

“I usually come home at midnight feeling tired and hungry. The best and quickest option is instant noodles,” he says.

Burdened with a busy work schedule, Cho says that for about a decade his beloved ramen noodles have been a staple of a diet that is dictated more by efficiency and taste than anything else.

But this popular meal has also become a comfortable habit, and when it came time to select his Lenten sacrifice, he wanted to pick something he deeply cared about, something commensurate with the love he feels for his faith.

“While chatting with my Church friends, I wondered how to spend this year’s Lent meaningfully.”

For him, the ramen noodles conjure the image of the Widow’s Mite, a meager offering made profound by the intention behind it.

For other Koreans, the Lenten season offers a chance to break harmful habits that at other times of the year prove difficult to kick.

James Park Sang-jin, 35, says he’s been trying to give up a 15-year addiction to cigarettes. He generally lasts no more than a week before the cravings get the better of him.

This year, however, he says he is resolved to use Lent as a way to finally succeed.

“I thought that Lent this year would give me a better chance to quit. I know it’s hard. Maybe it will be the hardest thing I ever do,” he said.

“I want to do it for my baby, who will be born in May. And this time, I am trusting in Jesus’ help during this special season.”

The cravings are as strong as they ever were, Park says, but he now turns to prayer to resist temptation.

Lent is also a time for the faithful to take stock of their commitment to the obligations of the Church.

Monica Lee Ji-youn says that her busy lifestyle and family commitments often lead her to miss Sunday Mass, and she’s resolved to do something about it.

“After working at my office all week and keeping up with the housework on the weekends, I often feel too exhausted to make it to Mass on Sunday. Now it has become a regular thing,” she says.

“From this Lent, I have resolved not to miss Sunday Mass and to strengthen my faith.”

Father Bernard Park Dong-jin, a parish priest at Hyehwa Church, says it’s not so much the choice of sacrifice during Lent but the spiritual intent that matters.

“It is good practice for the faithful to give up something they love to spend the Lenten season meaningfully,” he says.

“Lent is a time for repentance, prayer, abstinence, love and forgiveness. If the faithful are abstaining from a loved habit while remembering the passion of Christ and praying to God to accept their sacrifice, Lent will be a time full of grace.”

He adds, however, that for those trying to give up bad habits it is not simply about abstinence but about making a meaningful change in one’s life.

“If the sacrifice does not last, it is just an exercise in self-satisfaction. It is not achieving the goal. We should have the power to avoid the temptation towards bad habits permanently.”

Cho’s love of ramen noodles might not rank high on any list of evil temptations, but giving them up has had an unintended and significant impact on his life.

He has replaced his ramen noodles with a simple salad.

“As a single male, I have focused on maintaining an easy and convenient life. Now I have to wash vegetables and take extra time to prepare my meals,” he says.

He is eating healthier, though the extra work is something of a bother. And that has added another dimension to the Lenten sacrifice.

“Of course, this extra work is annoying, but I decided to think of it as another part of my sacrifice.”

And it seems to be paying dividends.

“I have lost two kilograms in just two weeks. I’ll try to keep this up even after Easter. But I’ll miss the ramen.”