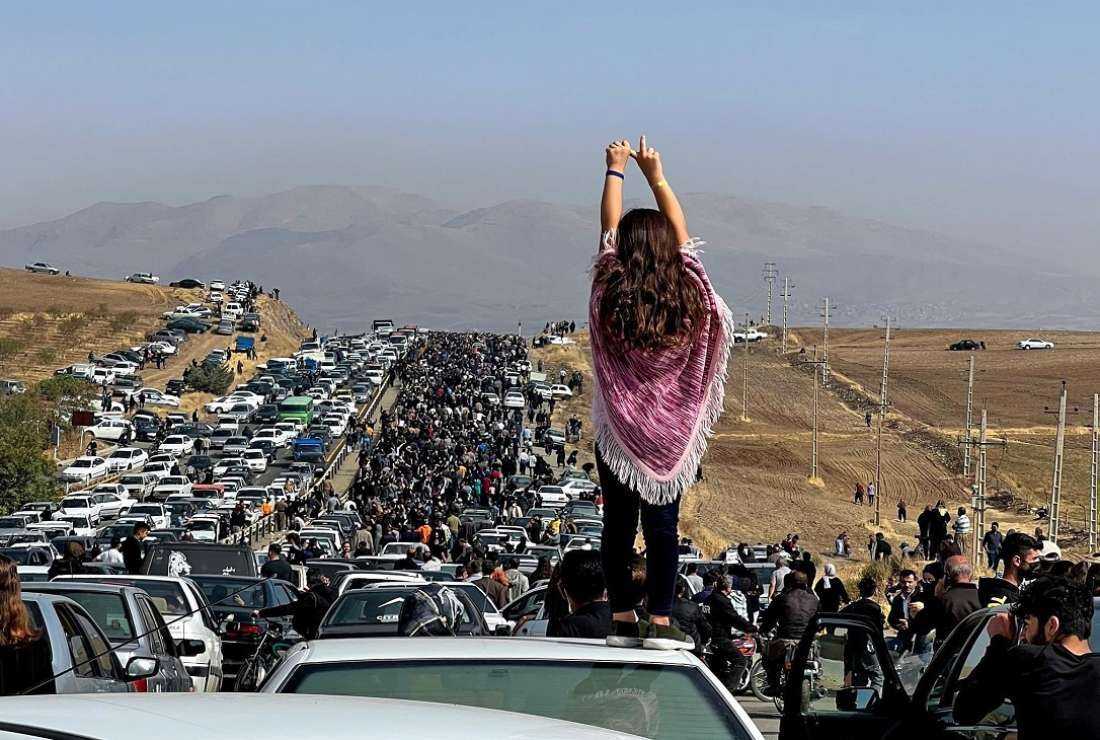 This image posted on Twitter on Oct. 26 shows an unveiled woman standing on top of a vehicle as thousands make their way towards Aichi cemetery in Saqez, Mahsa Amini's hometown in Iran’s Kurdistan province to mark 40 days since her death, defying heightened security measures as part of a bloody crackdown on women-led protests. (Photo: AFP/UGC)

It has been more than three years since Pope Francis pieced together the Document on Human Fraternity to foster fraternal ties with Islam, 20 months since he met with top Shia clerics, and more than 20 years since the Mission Suir Iuris of Afghanistan was set up.

Now the interfaith dialogue of the Church is facing its biggest challenge — females in Islam — which has become a burning issue as women take to the streets in Tehran and Kabul, calling for reforms.

What do the theocratically governed Islamic Republic of Iran and the so-called Islamic Emirate of Afghanistan have in common? In both nations, women are out in the streets, seeking freedom from the religious edicts of clerics who act as women’s gateway to heaven and arbiter of their final destiny.

Women across Iran are burning their headscarves and baring their heads in an alleged violation of these nations' strict religious dress codes.

The current protests by women against the morality police, the enforcement of the hijab, and the regime, in general, are not new. Iranians have taken to the streets before — of course, not without risk to their lives.

The nationwide unrest in Iran triggered by the death of 22-year-old Mahsa Amini while in the custody of the morality police following her arrest on Sept. 13 for “breaching the dress code” for women has lasted for more than two months.

The protests began in the Kurdish part of the country where Amini hailed from and then spread to the rest of the country. They are still going strong with no end in sight in the Shia-majority nation.

So far, security forces have killed more than 341 protesters and 15,800 of them have been detained, according to the Human Rights Activists News Agency.

But in November 2019, they killed at least 1,500 protesters when supreme leader Ali Khamenei authorized the unrestricted use of weapons.

In neighboring Afghanistan, the Taliban have decided to impose a strict interpretation of Islamic law, or Sharia, as the group’s supreme leader, Hibatullah Akhunzada, instructed judges a few days ago to implement Sharia punishments which include mutilations, flogging and executions.

The lashings for crimes ranging from adultery, theft and running away from home took place at the city’s main mosque, while elders, clerics and residents watched, the Associated Press reported.

Afghanistan is the only country in the world that officially limits education by gender — a major sticking point in the Taliban’s attempts to gain international recognition.

Since returning to power in August 2021, the Taliban have issued many orders, restricting the freedom of women — excluding them from most government jobs, secondary education and from traveling more than 70km without a male guardian.

At checkpoints along the streets, the Taliban chastise women who are not covered from head to toe in all-concealing burqas.

In May, the Taliban decreed that women will have to wear the Islamic face veil for the first time in decades. If a woman refuses to comply with the order, her male guardians will be sent to jail for three days.

The Taliban’s initial pledge to open secondary schools for girls was seen as the regime’s willingness to moderate. When they reneged on that promise, many Western donors halted investment and development programs.

In November, Taliban fighters dispersed dozens of female protesters in Kabul. Nearly 40 women marched through the capital before the Taliban quelled the protest by firing into the air. Though there have been minor sporadic protests over the past year, all forms of dissent are being crushed ruthlessly.

On Nov. 4, the Taliban detained women’s rights defender Zarifa Yaqoobi and her colleagues during a press meet that was held to announce the formation of the Afghan Women's Movement for Equality in Kabul.

"Unelected institutions, dominated by clerics, have succeeded in creating a narrative about a cultural invasion by a hostile West"

Several Taliban members stormed the venue to break up the event and deleted photos and videos from the phones of all participants.

On Nov. 8, prominent young activist, Farhat Popalzai, one of the founders of the Spontaneous Movement of Afghan Women, was arrested.

On Nov. 13, another woman’s rights defender, Humaira Yusuf, was taken into custody.

Since the early 1990s, the Iranian political map has been contested by conservatives, whose ideological totalitarianism limits political participation by the people, and the reformists who champion a freer public sphere rule of law. However, unelected institutions, dominated by clerics, have succeeded in creating a narrative about a cultural invasion by a hostile West.

By externalizing the driving force of protests, Iran’s ruling elites can no longer wish away the entrenched political and socio-cultural conditions that force the country’s women to voice their protest and to take to the streets.

By pushing the narrative of external enemies, the Islamic regime is appealing to nationalist sentiments, while justifying the violent crackdown.

Since the hijab is often seen as a “women’s choice” and a “sign of respect,” there was hardly any protest from outspoken human rights and women’s rights groups in the West. The Western world has failed to understand that the hijab is a sign of submission and control.

Iran has seen several waves of protests due to dire economic conditions or rigged elections. But the latest unrest somehow is different.

Over the years, women in Iran have gained an education. Their percentage in higher education rose from 3 percent in 1978 to 59 percent in 2018. They are now active in almost all professions. So, their expectations have risen. But the restrictions they face on a daily basis have caused simmering discontent.

In both nations, young people are leading the charge. A number of young celebrities and youth icons have put their careers at stake by joining the protesters. They are not just complaining about particular policies, but calling for an end to the current political system, where clerics who call the shots want to prevent women from asserting their mental, spiritual and bodily autonomy over the patriarchal system.

Iranian and Afghan women are fighting — and dying — to live a life as human beings which clerics want to deny them.

How long can the “mullahcracy” hold on to their pet themes to suppress women in the guise of saving them from the eternal fire?

Since its inception in 2019, the Document on Human Fraternity, inked by Pope Francis and the Grand Imam Al-Azhar Ahmed Al-Tayyeb, has achieved many a milestone.

Mission Suir Iuris of Afghanistan, set up by St. Pope John Paul II, was instrumental in starting many human development programs in the war-torn nation before the Taliban seized power last year.

Before winding up its operations in 2021, the mission, led by the Barnabite fathers, was running many schools for female students in remote areas and helped found the Tangi Kalay - School of Peace. Following the US withdrawal from Afghanistan, Pope Francis has called on the Taliban to allow children to receive an education.

With his 50-minute meeting with Grand Ayatollah Ali al-Sistani, one of the most senior leaders in Shia Islam, during the 2021 March papal visit to Iraq animosities towards Christians ebbed to a greater extent.

All these goodwill efforts will end up in vain unless the Church extends a helping hand to women who are seeking to live a decent life. Their current plight is a cry in the wilderness.