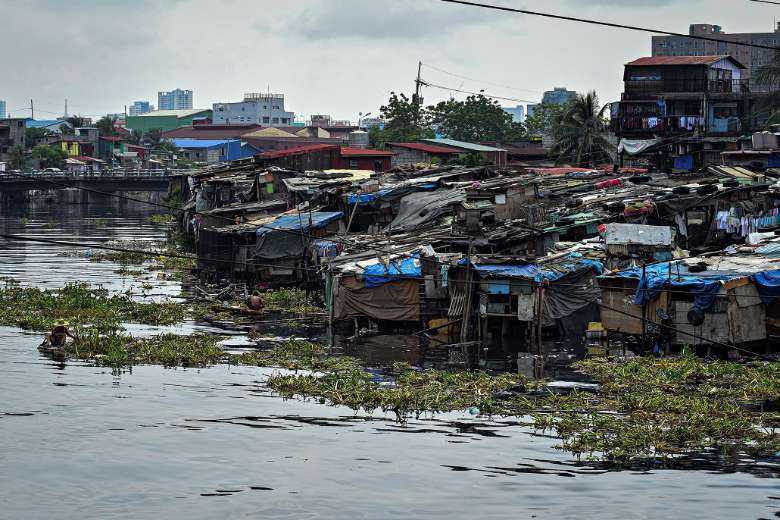 Overcrowded shanty towns, like this one built along a polluted river in Philippine capital Manila, are a common sight across Asia where the ‘economy of exclusion’ deprives millions of a life worthy of human dignity. (Photo: AFP)

I remember so well several outrageously funny scenes from the 2018 hit movie Crazy Rich Asians, an adaptation of Kevin Kwan’s 2013 novel of the same title. It's all about the super-rich, not just the rich, who are representatives of the emerging face of the exclusive one percent of the most affluent families in this part of the world.

According to the Boston Consulting Group, both the highly developed and rapidly developing economies of Southeast Asia are making the rich richer. They are mostly young and passionate entrepreneurs, digitally literate and avid followers of global trends. They are now regular consumers of luxury products and services.

Home to more than 4.6 billion people in 49 countries, Asia is the largest continent, comprising 30 percent of the planet’s total land area. China and India have the world's largest populations, with 1.44 billion and 1.39 billion people respectively. They are also two of the largest economies in the world.

On the other side of the material wall in Asia, we see millions of the Asian poor who are perpetually scavengers, scraping by, barely managing to survive with very little. Imagine the gap between the filthy rich on the one end of the economic spectrum and the poorest of the poor on the other end.

The poor became poorer during the pandemic in Nepal, Pakistan, Timor-Leste, Myanmar, Cambodia and India and other Asian countries with less than US$2,000 GDP per capita, according to the 2020 World Bank report.

“How can it be that it is not a news item when an elderly homeless person dies of exposure, but it is news when the stock market loses two points? This is a case of exclusion”

North Korea is one of the poorest nations; indeed, the European Commission once reported that the poor are so hungry that they eat grass. What we know is that their poverty problems are attached to deficient and non-transparent governance by a totalitarian regime.

Pope Francis is so vivid about this: “How can it be that it is not a news item when an elderly homeless person dies of exposure, but it is news when the stock market loses two points? This is a case of exclusion” (Evangelii Gaudium, 53).

The ideal is that the economic development of any country is inclusive but, sad to admit, it isn’t so in Asia, where the “economy of exclusion” deprives millions of Asians of a life worthy of human dignity.

The socioeconomic causes of Asian poverty include high inflation during crisis periods, natural disasters (Bangladesh and India are currently experiencing the worst floods in decades), weakness in employment generation and the quality of jobs, and the failure to develop the agricultural sector.

Income inequality in a highly unequal region such as Southeast Asia, where the rich become richer and the poor poorer, is in itself a symptom of a deeper crisis, which is moral in essence. Moral crises — such as corruption and a kleptocratic bureaucracy that thrives on red tape — produce injustice and injustice in turn means an inequitable distribution of essential goods and services originally intended for all.

Without insinuating that all rich people are bad, the regrettable situation is that Asia is where the lion’s share of the best land, crops, properties and material resources are owned by the smallest minority or the Crazy Rich Asians.

As St. John Paul II put it in Sollicitudo Rei Socialis: “One of the greatest injustices in the contemporary world consists precisely in this: that the ones who possess much are relatively few and those who possess almost nothing are many. It is the injustice of the poor distribution of the goods and services originally intended for all.”

Even under the pretext of property rights, greed can never be justified at any time. Yes, we have the right to own, but not to own what is profligate, extravagant and excessive

Again, from the Christian perspective, nobody, absolutely nobody, needs four luxury cars, a yacht, a helicopter, several exclusive apartments in New York, Dubai, Tokyo and Hong Kong, and a private vacation house on Nihi Sumba island in Indonesia, when nearly three billion human beings live on less than $5 a day.

It's scandalous that the salaries of chief executive officers (a.k.a. executive compensation) rise at an average of more than 10 percent every year while the rank and file subsist on the minimum wage. American statisticians John Abowd and D.S. Kaplan criticized how outsized executive compensation violates anyone’s basic sense of fairness. It's actually bothersome to know that executives make so much money only because they have so much economic power.

Even under the pretext of property rights, greed can never be justified at any time. Yes, we have the right to own, but not to own what is profligate, extravagant and excessive.

From the Christian perspective, private ownership is not an absolute right, for it is a means and not an end in itself. Affluence is a natural personal right — yes — but with corresponding social obligations. As a means to an end, wealth is subservient to the higher needs of society, better known as the common good or public welfare.

Every Crazy Rich Asian is reminded that private wealth has a social dimension, a principle that is grounded on the universal destiny of the goods of the earth. Sometimes called the “creative original intention,” it means that God intends to give the goods and resources of the earth to every person, not just a few rich.

* Jose Mario Bautista Maximiano is the author of ‘Global Business Ethics for Filipinos of the New Millennium’ (Anvil, 2001) and ‘Corporate Social Responsibility: Basic Principles and Best Practices’ (De La Salle University Press, 2004). The views expressed in this article are those of the author and do not necessarily reflect the official editorial position of UCA News.

ELVIRA NGUYEN
I was expecting some Christian solutions would be offered in the article but there was none.
Reply