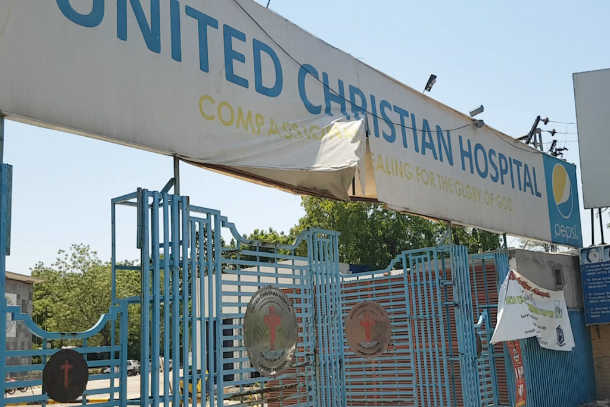 Plumbing leaks swamp the basement. Red stains reek of dried medicines. Broken furniture lies piled up with burst pipes that once supplied oxygen. A rusty ventilator gathers dust in a corner of the emergency department of United Christian Hospital (UCH), one of the oldest missionary hospitals in Lahore.

“Cracks have appeared on the large water tank that could flood the facility anytime. The gas supply was cut off earlier this year over unpaid bills. Electricity is often suspended. We were once served on a silver spoon; now it’s a living nightmare,” Christian nurse Mary (not her real name) told UCA News.

“There is no general surgeon; the gap is filled with visiting doctors and consultants. Only nurses care for patients in evenings and at night. Yet the staff have not received their full salary for two years. The administration owes me half a million rupees (US$3,145). The residential staff are being charged overpriced electricity bills.”

Mary is one of the 60 employees of UCH, the most talked about institute among Christian social media users over many years. The rumors include a red light bar, fake degree holders, encroachment and sale of its land and medical equipment.

Established in 1948 by Presbyterian American missionaries, the hospital was opened in Forman Christian College and later moved to the Gulberg area. Presbyterians bought the land while the US Methodist Church constructed the building with the help of Britain’s Anglican Church. The first open heart surgery in Pakistan was done here in 1968.

Last week Punjab’s government merged the province’s missionary hospitals with UCH in the wake of the coronavirus pandemic. Pakistan has reported 42,125 Covid-19 cases and 903 deaths. However, only 80 out of 260 beds at UCH are operational. Its only two functional departments are ophthalmology and gynecology. Five cesarean sections were conducted to deliver babies last month.

According to retired brigadier Samson Simon Sharaf, problems began when Christian institutes were taken over by the Pakistan government in 1972 as part of president Zulfikar Ali Bhutto's policy of nationalization. Bhutto's policy seized control of all schools, colleges and hospitals held by Christians.

“Visa restrictions were laid on foreign Christian missionaries working in Pakistan. This continues even today. The problem was with non-Catholic church organizations that were loosely aligned and usually at loggerheads with each other,” he stated in an article last year.

“Due to internal politics and strikes, the foreigners left and Pakistani specialists went on to establish their own hi-tech private hospitals in Lahore. Revenues dwindled and corruption increased. What remains are family cartels involved in UCH’s affairs.”

“Now I have nothing to do except clean my department every day. We are like the fire brigade, waiting for an emergency. It is the duty of the administration to provide patients for care.”

UCH became the talk of the town in 2006 when its former chairman was reported to have sold 253 square meters of land for a car park for about US$330,300. Representatives of the Church of Pakistan and Presbyterian Church are among the hospital’s board members.

“The deal under the table was US$250 million for 1,012 square meters. We formed an inquiring committee against the acquisition but the government supported these traitors of the nation who are like Judas Iscariot,” said Shahzad Elahi, a former member of Punjab Assembly.

“I appeal to the community to rise against the corrupt board. We stand with the hospital staff. Our heart beats for the cross standing on the hospital building.”

In recent years, the Supreme Court has repeatedly ordered the clearing of encroachments on the hospital's land.

The former chief justice of Pakistan, Saqib Nisar, heard a suo moto case in January 2019 pertaining to the lack of funds for the restoration of UCH. “I could go to any extent for restoration of the hospital as it was a gift to Lahore from the Christian community,” he remarked.

In July 2019, the Presbyterian Church and UCH board appealed to the apex court and the National Accountability Bureau to take notice of irregularities at UCH in the previous tenure.

A social media campaign against the latest proposal to renovate UCH’s structure has taken Facebook by storm.

A draft proposes investment of US$50 million for upgrading the hospital and establishing a medical college over a period of six years, with 70 percent profit sharing in revenue for 33 years.

According to UCH chairman Anthony Lamuel, the hospital’s current liability amounts to more than 50 million rupees (US$311,000).

“Self-generating revenue amid the virus outbreak is below 10,000 rupees monthly. Every participating church body on the board is supposed to donate one lakh (100,000 rupees) per year but only Lahore Diocese is contributing annual funds. A Christian college declined to take over a collapsed institution,” he said.

“The co-branding allows a common prayer room but not a mosque. Still, we denied many companies who wanted to invest millions of dollars but demanded full control. The tragedy of our community is that we are never on the same page.”

“The bank loan is impossible without collateral as we cannot rent, pledge, lease or sale. However, we shall have to rebuild from scratch. Commercial viability can create 600 jobs including old employees; 70 percent of nurses will be Christians. Thousands of minority youths will get training and many will get free treatment. There will be a cross in every ward. Verses and namaz [a ritualized Islamic prayer] won’t be allowed. We were blunt with the majority community,” he said.

“None of the pledges in the top court were fulfilled after the retirement of the chief justice. People are preferring protection over productivity. Finance doesn’t have any religion. Conversation involving Christian businessmen is lame. Business with any faith doesn’t matter as long as humanity is served. We are at the crossroads. The community can either gain or lose this opportunity.”

Shunila Ruth, parliamentary secretary for religious affairs and interfaith harmony, expressed her opposition to the proposal in a May 13 letter sent to UCH’s chairman.

“The board is changing the welfare and charitable character of UCH to a profit-earning entity. If the change is required, then the permission of the court is mandatory. The power and role of the board would be reduced to nothing. In a case of fraud, who will remove the member of the standing committee for reforms and investment?” she asked.

“The social welfare and well-being of laid-off staff serving for decades have not been taken into account. The whole idea of injecting big private investment is changing the core mission of compassionate healing to uncompassionate profiteering.”

Last week UCH staff formed a seven-member committee following an emergency meeting and released their demands in a Facebook video.

According to Pastor Amjad Niamat, the chaplain at UCH, this is the first time that hospital staff have stepped up to address the rumors.

“Rumors are being circulated these days about plans to lease our hospital for more than two decades. We are holding daily meetings to inform the staff. We want to resolve all issues with peaceful meetings. We shall never allow a non-Christian administration and condemn their proposal,” he said.

“We stand with the board but the staff should be on board to share their input. The institute has been saved because of the prayers and support of activists. This is an opportunity for well-wishers and donors to invest and save this Christian institute.”