Timor-Leste is a young country with much to learn politically, morally and spiritually Teachers from Sergio Vieira de Mello High School carry a statue of St. John Paul II to another high school in Dili on Feb. 10 to mark the occasion when the late pope was declared the patron saint of education in Timor-Leste. (Photo: Thomas Ora)

The Democratic Republic of East Timor — also known as Timor-Leste — is a Catholic country based on history and current reality.

The nation that became independent on May 20, 2002, is now only 18 years old and still retains problems one might expect with a country so young.

Entering Timor-Leste from the west, the Catholic atmosphere is immediately felt. Along the road in each village, there are churches of many sizes.

This country has a population of 1,318,445 people, of whom 96.9 percent are Catholic. The remainder comprises a small group of Muslims and Protestants.

A priest in capital city Dili, when asked if there were any more people of genuine religion, immediately replied: "Here everybody is born a Catholic even before they are baptized. If an East Timorese person is asked their religion, they will surely be surprised, because the population of East Timor is automatically Catholic and can't be different."

Entering Dili from the west, visitors are immediately met by a giant statue of St. John Paul II, seen by some as having played a key role in helping liberate the country from 23 years of Indonesian rule.

"When Pope John Paul II came to Dili in 1989, we suspected that we would soon be free from Indonesian occupation, which spread Islam to us,” said a 58-year-old community leader and lecturer who did not wish to be named.

“To commemorate his visit, we erected a statue in honor of the saint at the entrance to the city. We felt great joy when we separated from Indonesia in 1999. From l976 to 1999, we were colonized politically and by way of religion.

“Mosques and prayer centers sprouted everywhere and many people, especially children, were forced to convert to Islam. Now the mosques and mushallahs have all been demolished. During those 23 years, we learned only two things from Indonesia: cheating and stealing. We became corrupted …  we were taught to trick people and steal. Thank God we are now free."

A 62-year-old priest in a more rural part of the country shared a similar view of Indonesia’s rule but was also scornful of the country’s former colonial master, Portugal. Timor-Leste must be wary of China's debt trap 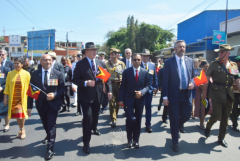 "We are almost 100 percent Catholic, but the behavior is far from Catholic teachings and traditions. The deception and stealing that go on are a legacy from Indonesia. Drinking alcohol and gambling are getting worse while prostitution is everywhere under the surface, especially in Dili. This is a legacy from the Portuguese era."

Despite this, there are no real problems in economic life, especially with regard to basic needs, for people in the interior of the country.

"People in villages get easy money. There are a lot of American dollars in villages,” another community leader in Dili said.

“Other people are cheating the system by claiming benefits they are not entitled to thanks to a government failure to check up on people. Others make money by refusing to retire,” he said, pointing to some teachers still teaching well into their seventies.

The refusal to retire by many older people is causing problems, he said. “It means the younger generation are not getting a chance, so unemployment is high. This and rampant corruption among officials are hurting society. We used to blame Indonesia for the corruption; now we are making it ourselves," he said.

A trader from Indonesia with a shop in Dili also lamented the unemployment rate among the young.

“People have money and purchasing power is sufficient, but young people don't like farm work, which is still the major employer, and other work is hard to get especially government work. Many young people are unemployed and roam the city. Projects involving overseas investment, mainly from China, employ their own people imported from abroad because local people are not considered good enough,” he said.

Problems also exist in the field of education, according to one 55-year-old educator in Dili.

"Education is not as advanced as we would like it to be. One problem is the language when it comes to our students going to Indonesia or English-speaking countries. Most students studying here are of mediocre quality,” he said.

According to him, three languages are taught in East Timorese schools — Tetum (the local language), Portuguese and English. This leads to confusion and limits the acquiring of knowledge amongst teachers, which has a knock-on effect on students and subsequently the workforce.

An unstable political situation in the country has also caused problems, with frequent ministerial changes resulting in many about turns and changes in policy.

“Regrettably, moral education is not given enough attention so that the discipline and self-esteem of students are low. We are all Catholics but, it seems clear, not Catholic in our behavior, he said.

“In schools, teachers are very afraid of the students. There is a saying: ‘The teacher's life is in the hands of the students.’ Students just pass to a higher grade automatically."

Regarding community life as a Catholic, a lay activist with the Legion of Mary and Catholic Charismatics agreed with the educator.

"We are a Catholic church in Timor Leste in name only. Complaints from priests from all of the country’s dioceses are that Catholics live more on Catholic formalities but not on Catholic behavior. This government has a lot of corrupt officials, whether in the legislature, executive or judiciary. Even in the police and army, corruption is rampant,” he said.

“We ordinary people know and see the situation is no better than the time with Indonesia before. In May and October, we diligently pray the rosary and every night a house visited by the statue of the Virgin Mary becomes a place for an all-night party. Honoring Our Lady during those two months becomes an excuse to party and get drunk.

“It is true that we are statistically Catholic — almost 100 percent — but people’s behavior does not reach 50 percent."

Timor-Leste is still young and needs to learn to organize itself politically, socially, moralistically and spiritually. Unfortunately, the country is experiencing so many things that are not conducive to the teachings of love.

"I am very doubtful about whether the next generation will remain Catholic or not,” a friend in Dili told me.

“We, this old generation, will soon be gone, and it is clear what is true and good according to the traditions and teachings of the Catholic Church is slipping away. There must be a comprehensive awareness in Timor-Leste of what life is all about in a Catholic country.”