Marx's interpretation of religion should challenge us to strengthen our faith in the goodness of God, humanity and nature The name Karl Marx is not foreign in the worlds of academia and politics. He was born in Trier, Germany, on May 5, 1818, and died in London on March 14, 1883. He was a multidisciplinary scholar in the fields of philosophy, history, sociology, political science and economics. His major works include The Communist Manifesto (1848) and Das Kapital (three volumes, 1867-83).

Marx’s critical theories about society, economics and politics are synthesized in what is known as Marxism, which explored how human societies transformed through class conflict, namely between and within the ruling classes (bourgeoisie) and the working classes (proletariat). The bourgeoise controlled the means of production, while the proletariat simply worked for wages.

In 2002, John Raines published an insightful book titled Marx on Religion. This book was a compilation of Karl Marx’s commentaries on religious issues. The translated version in Indonesian then appeared in 2003, with an excellent introduction by a German-born Jesuit priest and philosopher, Franz Magnis-Suseno.

The book, containing Marx’s critiques on religion, particularly Christianity, is a thought-provoking one to ponder. Marx criticized not only the roles and functions of religion in his time but also questioned the relevance of religion to one’s spirituality, ethics and morality. Marx was clearly uncomfortable with the fact of religion being used by those in power for their own political and economic ends.

This led Marx to conclude that religion is simply “the opium of the people” and as opium it must therefore be eliminated. The elimination of religion is critical for people to find their true self and happiness. However, Marx’s main challenge was neither to religion itself nor to the community of believers. In fact, he criticized the power structures and practices that have allowed religion to be used as a legitimization for oppression and exploitation. Implicitly, according to Marx, religion can only be maintained if it is meaningful to society. It was thus imperative for religions, particularly Christianity in Marx’s time, to review and renew themselves.

In countries like Indonesia where religion tends to be taken for granted, Marx’s view is a positive challenge

Marx’s ideas on religion were influenced by real experiences during his upbringing, adolescence and adulthood. The socioeconomic and politico-religious situation of the time must be taken into consideration in understanding Marx’s critique on religion. His thought-provoking thesis on religion was politically and economically conditioned. His theory should thus be examined in the light of this context.

In our contemporary context today, Karl Marx’s notion of religion may be considered as a call for religious people to remain critical, and to liberate religions from the hands of those who may incline to use it as a justification for oppression and exploitation, and even for violence and brutality.

In countries like Indonesia where religion tends to be taken for granted, Marx’s view is a positive challenge, not so much for a total abolition of religions but more so for honest introspection and autocritique. Marx calls us to religiously reform from within.

Franz Magnis-Suseno, in his introduction to the translated edition of the book (2003), suggests that criticism of religion is essential. Echoing Marx, Magnis-Suseno asks us as people of faith to be critical of political power structures and practices. He also encourages us to acknowledge our involvement in social oppression and exploitation, past and present, with the hope that this realization may prevent us from repetition of harmful involvement in the future. Magnis-Suseno further asserts that religion should be a liberating force for people, from the experience of, and the involvement in, any type of systematic injustice. Religion which has lost its liberating function must therefore be called to review and reform itself.

Communism not yet a relic in the south 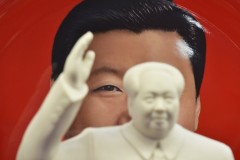 Can religion hold a dialogue with communism?

Implicitly, in the opinion of Marx, religion as an ideology seems to have always been a fertile ground for political power compromises throughout the ages. These compromises may allow some kind of negative tolerance to exist in dealing with social and economic injustices. Here religion seems to have entered the political arena, and politics sneaks into religious space. The two, religion and politics, become no longer two distinct entities and factions but are combined in a reciprocity structure. They feed and exploit each other.

In closely observing the practice of religion and the social interactions of people in his lifetime, Marx thus concluded that religion was a creation of those in power for their own interest, an interest that is perpetuated. Understandably, this conclusion has attracted much debate and controversy, particularly when Marx labeled religion as “the opium of the people,” and as opium it should be completely abolished, unless religion itself stops functioning that way. A rhetorical question can be posed: Can religion ever be completely abolished even though it continues to be experienced as opium?

A complete abolition of religion may also mean a complete elimination of humanity. Religion, in its broad sense, is as old as humanity. They coexist, and their coexistence indicates their interdependence, depending also on what and how one’s understanding of religion is. Religion can be seen as a human business concerning human interactions with both visible and invisible phenomena. It is important to make a distinction between religion as a power and social structure, and religion as an individual and community expression of faith and identity.

It is fair to argue that Karl Marx mainly criticized structured religion and challenged its misuse; he was not too obsessed with religion itself in terms of experimenting with ways to eliminate it. He simply proposed that it was time for religion to be “buried” more in a metaphorical sense, so new seeds could grow from it for the benefit of all in societies. In fact, as in the case of Indonesia, religions are not only still alive today but have become increasingly powerful.

Marx was a radical thinker, but any efforts to totally eliminate religion have proved to be meaningless. He simply hoped for, and expected, a radical change for the betterment of humanity. He may be correct in his critique of religion, but his critique needs to be understood in the context of his time and struggle. His controversial views on religion cannot therefore be seen as a universal representation of realities in different places and times.

It is crucial to bear in mind that religion has always been a complex phenomenon. Marx’s call for the complete abolition of religion in the 19th century must never be taken literally. Rather it should be understood in context and be interpreted as a call for religious reform. But can that call for reform be considered as an important and urgent matter in Indonesia? Any reform requires a lot of courage.

After the fall of Suharto in 1998, Indonesia began its reform era. The year 1998 marked the end of Indonesia’s “dark era” and the beginning of a new era of enlightenment for Indonesian democracy. The politics of hope for a new-look Indonesia where there is equality and inclusion, freedom of expression and supremacy of law remains to be a work in progress. The loss of Ahok in the 2017 Jakarta governor election mainly due to his religion and ethnicity, and the choice of Jokowi’s vice president, an Islamic cleric and lecturer Ma’ruf Amin, can be seen as indication that religion can still be used as a political means of power and ambition. Marx’s critique remains relevant.

Religious reform is first and foremost about inner transformation of the way we carry out our lives according to the core of our faith. At every stage of history, including now, it is evident that there is also a continuing need for powerful religious structures to be reformed so that they also live out the mission of their faith, always siding with the poor and marginalized, and not being used as a tool for oppression by the rich and powerful.

Karl Marx’s interpretation of religion should challenge us to strengthen our faith in the goodness of God, humanity and nature.