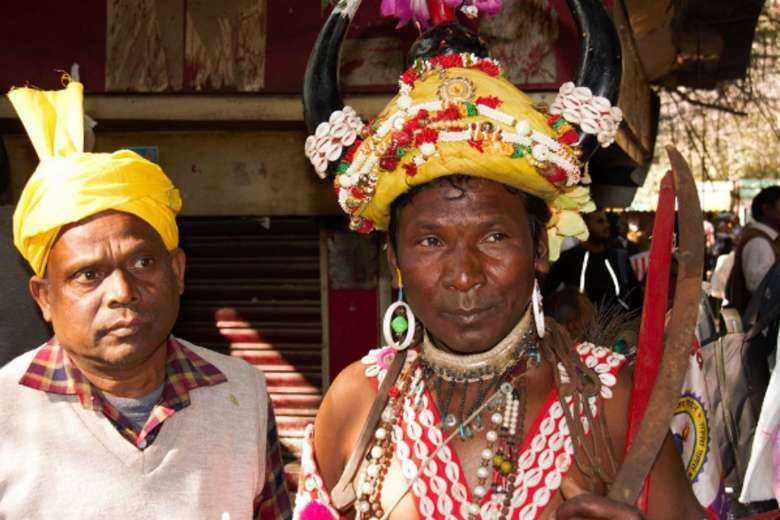 Tribal protesters in traditional head dress gather in New Delhi on Feb. 18 to demand recognition of their religion in the 2021 census. (Photo: Bijay Kumar Minj/UCA News)

The Church in India has never been under such stress as in the Christmas season of 2020.

Starved of finances under a harsh law that regulates international donations and the near absence of worshippers in the Covid-19 curfew, the Church cutting across denominations is pummelled by accusations from political foes and the seething anger of a section of the faithful outraged at exposes of corruption and moral turpitude, sometimes in the highest echelons of the clergy.

As the largest denomination, claiming a full 60 percent of the Christian population of about 30 million among 1.25 billion Indians, the Catholic Church gets more than its share of the torment from within and outside.

For the Episcopal, Evangelical, Pentecostal and independent churches, while some of the bigger groups have leaders facing serious charges of financial bungling and alienation of property -- the polite word for selling off churches, graveyards or institutional lands -- the main threat remains from the laws against religious conversion, once confined to a mere six states but now rapidly legislated in many more provinces by the Hindu nationalist Bharatiya Janata Party [BJP] which rules the country and controls two-thirds of the states. It does not seem too far away when it will be operational across the country.

Also spreading its footprint is a law banning not just the flesh of a cow, held holy by Hindus, but of all bovines, including the Indian water buffalo, which is the only source of low-cost protein for Muslims, Christians, Dalits and many indigenous groups. It also is an export item earning steady revenue for the Indian economy.

For parties such as the Congress, now reduced to a diminutive presence, in power in but three of the 30 states, and regional groups that rule in some states in the east and south, the anti-conversion laws remain attractive to woo sections of the majority community.

Colloquially, this is called "soft Hindutva," differing but marginally from the "hard Hindutva" of the BJP and its parent, the Rashtriya Swayamsevak Sangh, whose stated objective is to establish a Hindu Rashtra, or nation, by force against minorities such as Muslims and Christians, if needed. The non-BJP parties have failed singularly to come to the assistance of religious minorities.

Indian courts have decried vigilante violence against interreligious marriages and conversions, but that has not dissuaded police action against young men, especially Muslims wooing Hindu women, a phenomenon they term Love Jihad. The law against this, curiously, is defined as anti-conversion legislation. This gives total immunity to religious toughies enforcing their will and trying to break up marriages.

Similar groups attack home churches and break up religious congregations in central India and Tamil Nadu in the south. According to Persecution Relief, an organization that documents hate crimes and is now being targeted by vigilante groups, 10 Christians died under contested religion-related violence between January and September. The group registered 157 hate crimes against Christians in just the third quarter of 2020, making 450 cases this year. Even the Covid-19 pandemic and lockdowns across the country could not curb this hate.

Civil society has been pressing successive governments for two decades to enact a comprehensive law against hate crimes to check the targeting of religious minorities. The Congress, which ruled between 2004 and 2014, failed to fulfil its promise. The BJP under prime ministers Atal Bihari Vajpayee [1998-2004] and the now Narendra Modi, a former leader of the RSS, have flatly refused to consider a special law to stop targeted hate and the resulting violence. On the other hand, the political rhetoric from BJP chief ministers of the country's largest states, including Uttar Pradesh, has served as a dog whistle to rouse militant groups in their ranks.

The Church, especially its outreach by Jesuits and other religious congregations working amongst the poor, the Dalits and the indigenous Adivasi groups, faces the militant majoritarian entities' wrath. Government agencies, including the police, have been monitoring church groups.

The recent arrest of 84-year-old Jesuit Father Stan Swamy at his Ranchi home has been understood by civil society as a warning to the Church and to all others working, like him, for the empowerment of the Adivasis. The Adivasis of central India live in a thickly forested region that has much of India's mineral resources, now being sought by local and international cartels.

The government feels the Adivasis are being tutored to resist the acquisition of their land. Father Swamy continues to languish in jail on charges of being part of a conspiracy against India's prime minister. Arrested before him were a group of poets, writers, lawyers and activists, all now held in jail without bail or parole. An international campaign has been launched to seek his release from jail. Father Swamy has Alzheimer's disease.

But the ticking bomb for the Church is a rising disgust among the people at several instances of a violation of church codes on celibacy and sexual mores, not just by clergy or seminarians but also half a dozen bishops in the 180-strong hierarchy.

Their own clergy have accused at least one archbishop of a coastal state in the east and three bishops from southern India of being married, two of them being fathers of children. A fourth is facing trial on charges of rape.

Currently, the ticking bomb is on a short fuse in the important state of Orissa, where the Archdiocese of Cuttack-Bhubaneswar is seeing an incendiary confrontation between the bishop and a section of the clergy, most of them Dalits, but also several from the dominant Adivasi community. There is a breakdown of communication, and one priest has faced punitive action.

Orissa is a critical state where the Church is under close scrutiny by government agencies and is particularly targeted by militant Hindutva elements. They were responsible for the mass violence on Christmas Eve in 2007 and the massive arson, murder and rape in August 2008.

At the root of the matter is the absence of any mechanism in dioceses for taking cognizance of serious allegations against the clergy either by religious women or by sections of the laity. Only when the scandal bursts in the media or when the police step in, do expressions of concern arise. Allegations are that the collegiality at the hierarchy level in the nation and its equivalent in the dioceses works to suppress any articulation by victims and others.

The last papal nuncio was seen as non-responsive to authentic information on misdemeanors given him from several dioceses.

Canon law is clear on the bishop's sovereignty in his diocese and near immunity from interference by regional or national forums of bishops, including the Catholic Bishops' Conference of India. The power to intervene or take any action rests with the pope.