Starting from humble beginnings in the early 1960s, St. Ignatius Church has grown into a parish with more than 4,200 Catholics Starting from humble beginnings six decades ago with some 100 parishioners, St. Ignatius Church in Kingsmead in the western part of Singapore has grown into a fully fledged, self-sufficient parish with more than 4,200 Catholics.

The 60-year journey was challenging but successful thanks to the selfless sacrifice and dedication of a band of Irish Jesuits who turned a simple kampong (clustered village) dotted with huts, coconut trees and chicken farms into a vibrant Catholic stronghold.

To mark the auspicious moment for the parish, three Jesuit priests — Fathers Colin Tan, Jerome Leon and Ravi Louis — joined the faithful to declare July 26, 2020, to July 31, 2021, as a jubilee year for the church with a special theme: "Above all, seek God."

Interestingly, the church's celebration coincided with the 200-year jubilee of the Catholic faith in Singapore.

The Singapore Church had planned a range of programs and activities for its jubilee year but was cut short due to Covid-19. On July 26 last year, Archbishop Marek Zalewski, apostolic nuncio to Singapore, held a livestreamed Mass to mark the official beginning of the jubilee year.

In a recent article for the website of the Jesuit Conference of Asia Pacific, Father Tan paid tribute to Jesuit missionaries who pioneered the parish and spread the faith.

“It was the fruit of the Irish Jesuits who were first diverted to Singapore to start the mission by default when their intention to go to China was no longer possible with the communist takeover in 1949,” Father Tan said.

Initially, Jesuit superiors in Rome were hesitant about the call

In 1949, when Jesuits in Hong Kong were pondering their next possible mission as their intention to go to China was hamstrung by the communist takeover, Michael Olcomendy, a French missionary and the first bishop of Singapore, invited Jesuits to open a school in the then British colony.

Initially, Jesuit superiors in Rome were hesitant about the call. It changed when Father Paul O’Brien, the Hong Kong-based vice-visitor of Jesuits in Southeast Asia, met Bishop Olcomendy on a train journey in France.

Consequently, Father O’Brien visited Singapore in February 1951 to set up a hostel for students from Malaya (now Malaysia) at the Teachers Training College. In November that year, Father Patrick Joy moved to Singapore from Hong Kong as the local superior to supervise the building and hostel management. 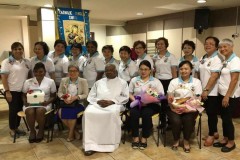 With funding from various sources, the Jesuits bought a four-acre plot where the hostel was set up that could accommodate 85 students and eight Jesuits. Archbishop Olcomendy blessed the facility on Aug. 16, 1954, to mark the official beginning of the Jesuit mission.

As Jesuits started offering Masses in a room for hostel students and priests, some Catholics from the neighborhood joined in. The congregation started to grow and soon Mass was moved to the porch, allowing some 100 participants to attend.

One interesting incident during a Sunday Mass prompted the Jesuits to think about creating a parish as there was no church nearby.

“One Sunday, at the end of Mass, a lady took off her beret, passed it round for a collection and emptied it on the table where Father Joy was investing. That was taken to be the official start of the parish,” Father Tan recalled.

Father Thomas Doody came from Hong Kong to help an anxious Father Joy and to do fundraising. Father Doody was a good-natured priest and fluent in Cantonese, which made him popular among the parishioners.

With local and foreign funds, a plot of 3,313 square meters was purchased where the Jesuits started building what became St. Ignatius Church.

On Feb. 12, 1961, Archbishop Olcomendy blessed and inaugurated the new church that could accommodate 550 people.

A year later, a church bulletin was launched. Following the Second Vatican Council, on Nov. 29, 1964, the church held a Mass in English instead of Latin with the priest facing the congregation.

As the parish grew with local and migrant Catholics, the church became abuzz with various activities by groups including the St. Vincent de Paul Society, Legion of Mary and a ladies’ choir. A group of Catholics started catechism classes for children in nearby areas and for those studying in non-Catholic schools.

Each year, the feast of St. Ignatius of Loyola became the major highlight of the parish. The festival was marked with Tridium Masses and social and cultural programs by parishioners.

The decibel of the weekend Masses was greatly increased

The parish priests who looked after the church from 1978-88 made major efforts to infuse among Catholics what it is meant to be a Catholic community and a Catholic family. A group of young Redemptorist priests were invited to raise awareness and form neighborhood groups to foster a sense of community and encourage greater involvement in church activities.

All these had a great impact on the faithful. “The decibel of the weekend Masses was greatly increased,” recalled Father Kevin O’Dwyer, a former parish priest.

More Catholics started to become catechists and lectors. The church started a new ministry, the Lilies of the Valley, to offer prayer services for families of deceased Catholics.

As church members continued to grow by the end of the second millennium, parish priest Father Leslie Raj joined with the congregation to embark on a new church complex project costing an estimated US$14 million.

The donations came from all walks of life. Church members sourced individual and institutional donations while the church arranged charity programs such as anniversary dinners and charity golf tournaments. Sponsorship items such as religious artifacts, festive cookies, St. Ignatius teddy bears and Christmas CDs were sold to raise funds. The new church complex was blessed and inaugurated by Archbishop Nicholas Chia on Feb. 12, 2004.

The new complex added more classrooms, covered walkways and wheelchair access. It also included a new adoration room, a new canteen and a commercial grade kitchen with a soup kitchen that served breakfast for the poor on Sundays.

Then parish priest Father Philip Heng emphasized social enterprises for the parish. The church launched an upmarket bazaar that raised $350,000 for services for the poor and needy.

The 50th anniversary in 2011 became another milestone for the parish when a commemorative book depicting the history of the church was published.

Today, St. Ignatius Church has a vibrant life of faith as local Catholics, joined by a significant number of migrant Filipinos, engage in church activities such as Bible study, sacraments and catechism for migrant workers, youth programs, services for the sick and elderly, a social mission fund and seasonal activities like Lenten fish fry, Advent wreath making and feast day fairs.

Although the pandemic has greatly hampered jubilee programs, the church has made efforts to make it remarkable.

In December 2020, some 300 Catholics participated in Advent Prayerthon, a 60-hour prayer marathon marking the 60-year jubilee.

In line with the Jesuits’ Universal Apostolic Preference of Walking with the Poor and the Excluded, the church aims to raise $60,000 by selling commemorative souvenirs such as T-shirts and umbrellas for the church’s charity services.

On Feb. 12, the church also inaugurated a memorial hall to pay tribute to Jesuits who pioneered and developed the parish. A commemorative documentary video on the church and a musical based on the life of St. Ignatius are in progress.

On July 31, Archbishop William Goh of Singapore will celebrate the Jubilee Finale Mass to mark the close of jubilee year and celebrations.