570 priests and nuns succumbed to Covid-19 in India

The latest to fall was Father Petrus Kullu, SVD, who passed away at a private hospital in Bargarh of Odisha 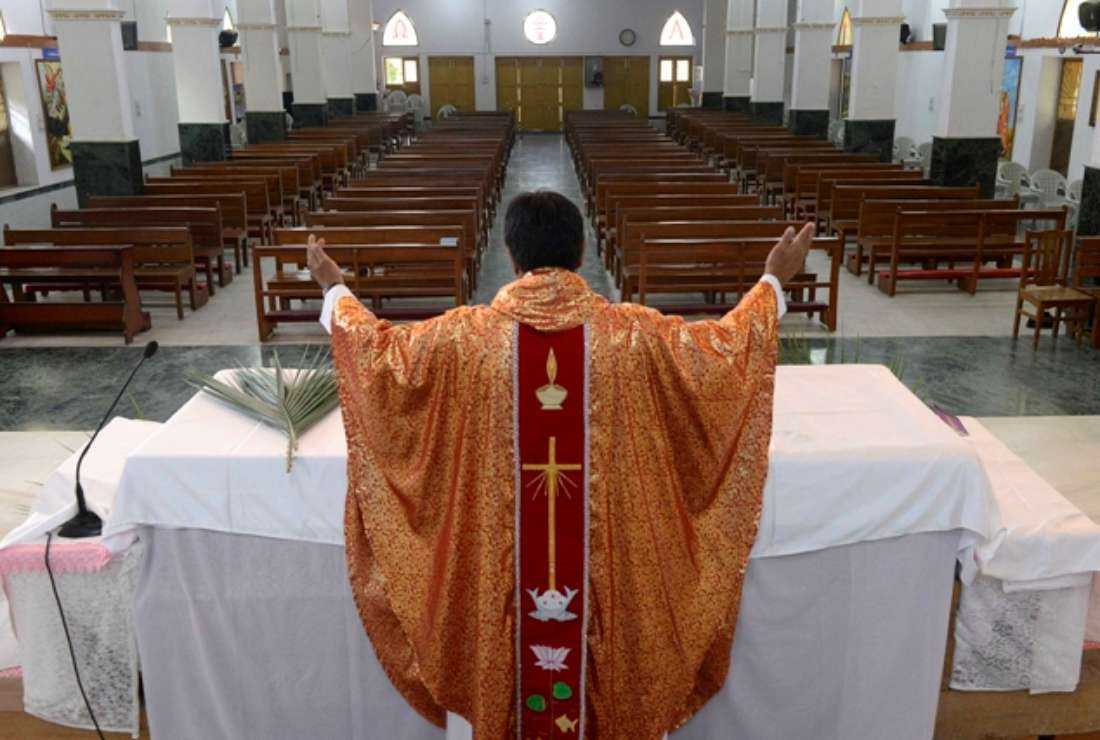 An Indian Catholic priest celebrates a private mass on a Palm Sunday event during the nationwide lockdown as a preventive measure against coronavirus in Secunderabad city, on April 5, 2020. (Photo: AFP)

The Covid-19 death toll of Catholic priests and nuns in India hit 570 with the latest death of a senior priest in the eastern state of Odisha on Aug. 18.

Father Kullu suffered from seasonal flu since Aug. 12 and took medicines. But the medication failed to improve his health, Father Rodrigues said.

Following breathing complaints, he was admitted to St. Mary’s Hospital on Aug. 16.

On Aug. 17, doctors identified symptoms of Covid-19, though he tested negative. His lungs were seriously infected, and he died in the hospital’s Covid bloc the following day.

Father Rodrigues said the funeral and burial of his confrere were scheduled for Aug. 20.

“With the death of Father Kullu, the Catholic Church in India has lost 304 priests and 266 nuns on account of Covid-19,” says Capuchin journalist Father Suresh Matthew, who has compiled data on the deaths of Indian Catholic priests and nuns during the pandemic

Father Mathew, the chief editor of Indian Currents, a Church-run English weekly news magazine, spoke to UCA News on Aug. 19 about the massive loss the Indian Church suffered because of Covid.

The deaths are "a huge loss to the Catholic Church in India where it needs more dedicated missionaries to serve the people in remote areas”.

Most deaths of priests and nuns, Father Mathew said, were reported from remote mission stations in the country where good medical facilities are not available.

“Many either failed to detect the disease in the initial stage or failed to get proper treatment leading to their deaths,” the priest said.

Many had the opportunity to move to better places for treatment, but they stayed with the people who did not have the luxury of better treatment and eventually died, added the priest.

Father Mathew has been recording the death toll since April 2020.

The Society of Jesus or Jesuits lost the highest number of 44 priests followed by Salesians of Don Bosco (SDB) who lost 17 and the Society of Divine Word (SVD) who lost 16.

The Missionaries of Charity (MC) lost 23 nuns followed by the Congregation of Mother Carmel (CMC) which lost 12 nuns.

Father Mathew also did not rule out the possibility of missing records of priests and nuns who died in the initial stage when the pandemic broke out in the country.

“But that may not be such big numbers,” the priest added.

India has recorded about 44.3 million infections and about 567,000 deaths from the pandemic, according to Our World in Data.