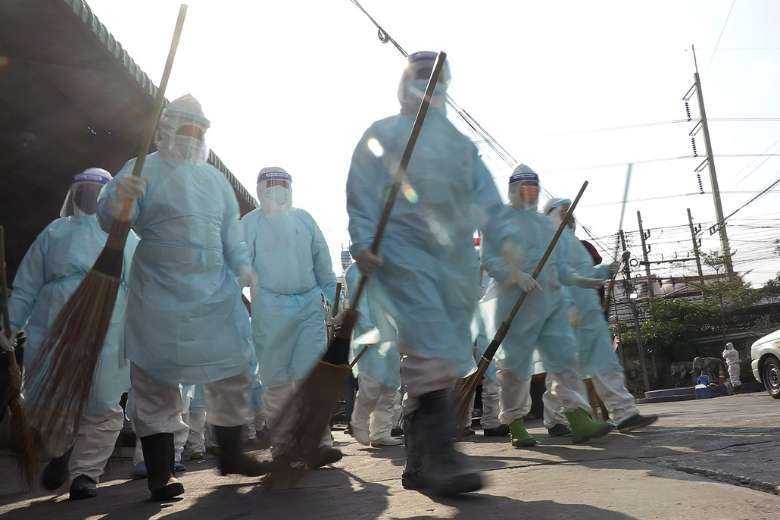 Workers walk through Samut Sakhon Shrimp Center on Jan. 25 as they disinfect the market, which was temporarily shut down due to several vendors testing positive for Covid-19. (Photo: AFP)

Authorities in the central Thai province of Samut Sakhon have taken the unprecedented step of effectively imprisoning some 40,000 migrant workers by preventing them from leaving the seven large factories where they work.

The measure is expected to remain in place until at least the end of February and provincial officials say the move has been necessary to limit the spread of Covid-19 in the province, which has become the epicenter of a second wave of the coronavirus in Thailand.

Thousands of migrant workers in the province, mostly from Myanmar, have tested positive in recent weeks, although most have remained asymptomatic.

In all, more than 9,000 infections have been found in the seven factories, which have already been placed off-limits to people from the outside for some time, according to Kiatipoom Wongrajit, a senior public health official.

The migrant workers at the site can continue working as normal but aren’t allowed to leave the premises where they also live in crowded and sparse accommodation.

Kiatipoom said the migrant workers can lead normal lives at the factories, but rights groups are expressing concerns about the arrangement.

Concerns have also been raised about whether infected workers might pass the virus to other migrants at work or in their living quarters.

“We are talking about tens of thousands of people here in [crowded] conditions and it’s highly doubtful that containing the virus at these factories can be done effectively while people keep on working,” Suwalit Pakdee, a local business owner, told UCA News by phone.

“We are quite concerned and also feel sorry for these foreign workers.”

There have recently been some 12,000 documented cases of coronavirus infections in Samut Sakhon, accounting for more than all the infections recorded in Thailand since the outbreak began a year ago.

The province is a hub of Thailand’s lucrative seafood industry, which employs hundreds of thousands of migrant workers from Myanmar who usually work in grueling conditions on low wages.

Senior officials have largely blamed a second outbreak of Covid-19, which started in mid-December in the province after several months of no documented local transmissions in Thailand, on migrant workers from Myanmar.

They have accused these migrants of bringing the virus into the country after some had allegedly sneaked across a porous land border illegally while evading strict disease control measures, including a two-week quarantine.

“The source is likely migrant workers,” said Public Health Minister Anutin Charnvirakul, who failed to provide concrete evidence in public to back up that claim.

Numerous migrants from Myanmar work in crowded and unhygienic conditions in the province’s seafood industry. Many labor rights activists have likened their employment situations to modern-day slavery.

Airborne pathogens like the coronavirus can easily spread among these workers and their access to quality health care is limited, rights activists say.