Rohingya migrants look on following their arrival by boat in Lhokseumawe, Aceh, on Sept. 7. Nearly 300 came ashore in what is believed to be the biggest landing of the persecuted Myanmar minority in years. (Photo: AFP)

About 300 Rohingya refugees have come ashore on the northern coast of Aceh in Indonesia after spending seven months at sea in desperate conditions.

Another 30 people had died since setting sail from Cox’s Bazar in Bangladesh in February, the United Nations High Commissioner for Refugees (UNHCR) said on Sept. 7.

“The group had repeatedly tried to disembark over the course of more than 200 days at sea, to no avail. Refugees have reported that dozens passed away throughout the journey,” said Indrika Ratwatte, UNHCR director for Asia and the Pacific.

UNHCR staff in Aceh were supporting local authorities to assess the needs of the refugees. The immediate priority was providing first aid and medical care. All were expected to be tested for Covid-19 in accordance with standard health measures in Indonesia for all arrivals.

The latest Rohingya crisis was sparked three years ago when the Myanmar military alleged separatists had attacked army outposts, prompting a viscous response and an exodus of about 700,000 refugees across the border and into Bangladesh.

The United States announced sanctions against all four Myanmar generals and their families, but the 10 nations that make up the Association of South East Asian Nations (ASEAN) have been criticized for their lack of response to the crisis.

“Their [the refugees in Aceh] hazardous ordeal has been prolonged by the collective unwillingness of states to act for more than six months,” Ratwatte said. “Having created a mechanism to convene governments from across the region for precisely this purpose, the promise of that commitment remains unfulfilled.

“The Bali Process, as the only existing regional coordination mechanism able to convene states on such maritime movements, has failed to deliver comprehensive, regional action to predictably save lives through rescue and disembarkation.”

World refugee numbers are at a record high with nearly 71 million people who cannot live in their own homes. 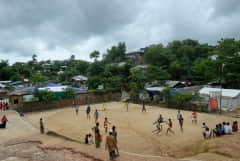 Myanmar remains the biggest headache for resolving refugee issues in Southeast Asia. The only bright spot was that the population was stable over the last 12 months at 1.1 million, with 906,600 living in camps in Bangladesh. Another 200,000 are split between Malaysia and Thailand.

“UNHCR and others have repeatedly warned of dire consequences if refugees at sea are not permitted to land in a safe and expedient manner. Ultimately, inaction over the past six months has been fatal,” Ratwatte said.