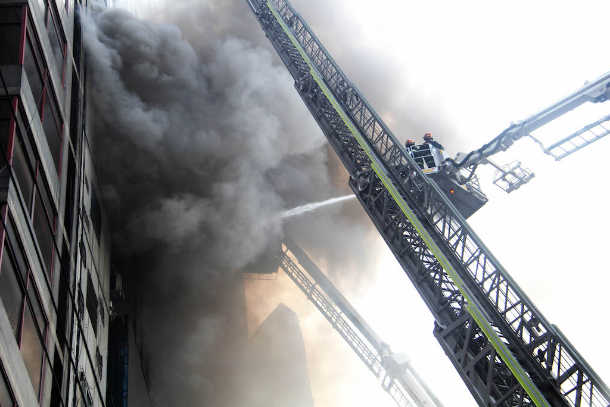 Firefighters struggle to douse a fire at FR Tower in the upmarket Banani area of Bangladeshi capital Dhaka on March 28. At least 25 people were killed and more than 100 injured in the blaze. (Photo by Stephan Uttom/ucanews.com)

At least 25 people were killed and more than 100 injured after fire engulfed a commercial building in Bangladeshi capital Dhaka on March 28.

As many people are receiving hospital treatment for severe injuries, police and fire officials believe the death toll may rise.

The incident comes little more than a month after another deadly fire destroyed several buildings and shops at Chawk Bazar in the old part of Dhaka and left at least 70 people dead.

The origin of the latest blaze is unknown, but fire officials suspect it started in a restaurant on the fifth floor of 23-story FR Tower in the upscale Banani area of northern Dhaka.

The fire broke out at midday, trapping hundreds of panicked people inside the building. After six hours of frantic efforts, firefighters doused the blaze.

Trapped people were seen screaming for help, waving hands and clothes, on the ledges of different floors of the building.

Some desperate people jumped off the building, while other climbed down and grabbed ropes lowered by rescue helicopters.

Shafique Ahmed, 25, was searching for his friend Muhammad Momin, an office assistant on the 10th floor. “Since the fire broke out, my friend has become unreachable by phone. I am praying so I can get him back,” he told ucanews.com. Rescuers rush an injured man to hospital after the blaze. (Photo by Stephan Uttom/ucanews.com)

Government officials said the building did not have adequate fire safety equipment and had added four floors without permission from authorities.

“We checked the documents of the building and have found irregularities in building construction and fire safety measures,” Abdur Rahman, chairman of Rajdhani Unnayan Kotripokkho (Capital Development Authority), told BBC Bangla on March 28.

“In 1996, the owner got permission to construct an 18-story building, but in 2005 the owner submitted a building design that showed it was a 23-story building and different from the original design.”

“It’s now summer and the supply of water was not adequate. Most offices used highly inflammable synthetic fiber for decoration, which caused the fire to spread to other floors quickly,” he told journalists.

Pintu William Gomes, head of the disaster management department at Catholic charity Caritas Bangladesh, said deadly fires are the result of massive corruption and irregularities in building construction and maintenance.

“In our country, violation of the building code, use of low-grade construction materials and disregard for fire safety are the order of the day. That’s why we have seen many accidents and deaths, and it won’t stop until malpractices and irregularities stop,” Gomes told ucanews.com.

According to the Dhaka-based Bangladesh Environmental Lawyers Association, 1,590 people have died in 16,000 fires in the country in the last 10 years.

Watch this ucanews.com video for more on the fire: