Despite difficulties, long-term outlook is positive for China’s faithful 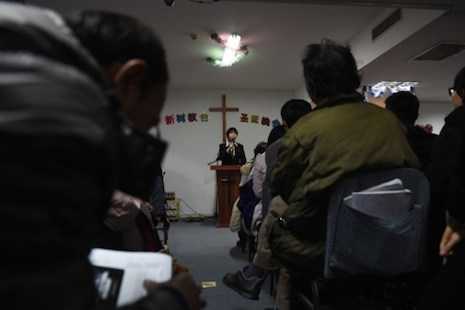 The pastor of an underground church conducts a Christmas Eve service at an apartment in Beijing, on December 24 (AFP Photo/Greg Baker)

It is difficult to recall a more troubling year for Christians in China than 2014. Starting in the spring, authorities in the southeastern province of Zhejiang began demolishing and removing crosses at hundreds of churches.

In July, a court 500 kilometers south of Beijing in Henan province sentenced Pastor Zhang Shaojie of the state-sanctioned Protestant Three-Self Patriotic Movement (TSPM) to 12 years in prison for disrupting “public order”. After his appeal was rejected in August, Pastor Bob Fu of US-based China Aid told ucanews.com that Zhang’s case represented the “harshest sentence and persecution of a church official or pastor since the Cultural Revolution”.

Last year ended with the arrest of Christian Korean-American aid worker Peter Hahn on charges of embezzlement in December, four months after the detention and investigation of a Christian Canadian couple for “stealing state secrets”. Both cases represented the tip of the iceberg amid a recent targeting of Christian activists on China’s border with North Korea. Churches have reportedly been forced to close and hundreds of South Korean missionaries denied new visas, forcing them to leave.

For many Christians in China, this was the most difficult year since Deng Xiaoping allowed Christianity to re-emerge from the shadows of Chairman Mao’s Cultural Revolution in the mid-1980s.

But that does not mean Chinese authorities are deliberately targeting Christians because of their faith alone. And despite this very bad year, the longer-term prospects for Christianity in China are perhaps more hopeful than ever.

In Zhejiang, speculation has centered on whether or not Beijing has ordered provincial authorities to crackdown on the spread of faith in an area with among the densest populations of Christians in the country. More likely, authorities have been more strictly interpreting the tougher presidency of Xi Jinping and his ongoing emphasis on the “rule of law” since his term in office began in March of 2013.

For years, rich Christian businessmen in the city of Wenzhou had managed to get bigger and bolder churches built through connections with key officials. They were epitomized by the huge Sanjiang Church, which was completely demolished in April, but only after negotiations between church leaders and authorities to destroy the sections of the church that fell foul of regulations failed to produce a consensus.

In other words, Zhejiang authorities who once worked with rich church funders to get churches built had suddenly switched their prime motivation to keeping in check with Xi’s new, all-encompassing focus on rule of law. The motivations are obvious: Xi’s central government has been unceremonious in firing party officials en masse, particularly those deemed guilty of corruption or for failing to do their jobs according to Chinese law.

This appears to be the greatest problem facing Christianity in China, and the core reason behind what has at times appeared to be a direct attack on faith, but is almost certainly not. No direct link between harsher Christian persecution and Xi has been made so far.

In the only major internal Communist Party policy document outsiders have seen since Xi’s rise to power — Document 9, circulated in the Spring of 2013 — warnings were issued against Western liberal democracy, civil society and journalism. But there was no mention of Christianity or religion.

Xi, the strictest Chinese leader in decades, has ordered his vast ruling apparatus to more closely follow the rules while promoting greater nationalism. Last year was the first full year of his term in office, and Christianity hardly fits with either of his two main policies, geared towards resurging the widely unpopular Communist Party. As a result, Christianity has found itself squeezed amid a growing focus on social stability and a return to Chinese values.

On China’s border with North Korea, as in Zhejiang, authorities are similarly more strictly interpreting the rules as they clamp down on groups that help refugees flee across what is the only overland escape route from North Korea: China. It just so happens that almost of all the groups that help North Koreans in this sensitive frontier area are Christian.

In the past, Chinese authorities often tolerated these groups but under Xi things have become stricter, says Sokeel Park, director of research and strategy at Liberty in North Korea, a Seoul-based NGO that helps settle North Korean refugees in the south.

“If you put yourself in the shoes of the Chinese authorities, there are these foreigners running around doing things they shouldn’t be doing in the border regions contributing to the flow of North Korean refugees, and also being a potential long-term subversion of Chinese central authority,” he told ucanews.com on Monday.

Under Xi, lower level officials appear much more motivated to compartmentalize and manage Christianity, the approach the party first took when Deng set up religion-governing state organs in the mid-1980s as he let faith re-emerge in China.

Last year saw more widespread targeting of house churches, and less variation in this approach by province. There was also news in the state press that the party is drawing up a list of “legal” places to worship, and even government plans to create a “Chinese Christian theology”.

Although China’s level of tolerance or intolerance of Christianity appears haphazard at times, the signs for how it will handle faith in the future are now more defined: those that fall within the stricter rules will be tolerated, those that do not will be targeted.

For the Catholic Church and its centralized power structure, this is likely to create further problems and little in the way of settlement as The Vatican and Beijing continue secretive talks aimed at ending disputes over Bishop ordinations.

Yet among the wider Christianity community in China, there appears to be little the Chinese government can do to quell the rise of Christianity, short of a an outright ban as seen under Mao.

Although Zhejiang ordered the demolition or removal of crosses at 426 churches up to mid-December, China has reportedly built or renovated churches at the rate of more than 1,000 per year for the past five years. That means there were almost certainly hundreds more churches in China at the end of 2014 compared to the start of the year.

Among them is the new church in downtown Kunming, Yunnan province, now the biggest church in the whole of Southwestern China.

Meanwhile, every estimate produced on the number of Protestants and Catholics in China — however wildly different — all point to what is rare growth in numbers compared to the stagnation seen in congregations across many other countries.

Last year may have been a terrible year for Christianity in China, perhaps the worst in a generation. But the long-term future seems anything but, whether President Xi likes it or not.