Oblate Father Jozef Hollanders was killed in a robbery in a parish near Mahikeng, South Africa, on Jan. 12, 2020. He was among 20 Catholic missionaries killed worldwide in 2020. (Photo: Fides.org)

At least 20 Catholic missionaries were killed globally in 2020, including six laypeople and eight priests, reported a Vatican news agency.

Three of the killed were in Asia — one priest, one seminarian and one layman.

The highest number of Catholic missionaries killed was reported from America, where five priests and three laypeople were murdered.

The African continent reported seven murders of missionaries. One priest, three religious women, one seminarian and two laypeople were killed in Africa.

In the last 20 years, at least 535 Catholic Church workers have been killed globally, including five bishops.

Even in 2020, many pastoral workers lost their lives during attempted hold-ups and robberies in impoverished nations where governments are weakened by "corruption and compromises and in the total lack of respect for life and for every human right," the agency said.

None of the dead carried "out striking feats or actions, but simply shared the same daily life as the majority of the population, bearing their evangelical witness as a sign of Christian hope," the agency said.

Fides, founded in 1927, releases an annual list of murdered Catholic workers. It uses the term "missionary" to refer to "all the baptized engaged in the life of the Church who died violently." A modern-day massacre of innocents 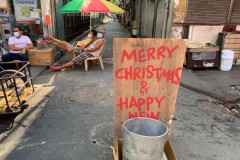