16 get death sentence in Bangladesh for student's murder 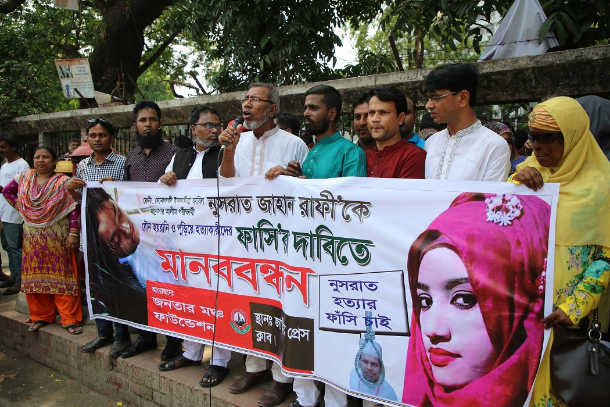 Protesters demand the death penalty for those responsible for the murder of Nusrat Jahan Rafi, a 19-year-old madrasa student, during a protest in Dhaka on April 20. A court sentenced 16 people to death for the murder on Oct. 24. (ucanews photo)

A court in eastern Bangladesh has sentenced 16 people to death for the murder of a female student who was set on fire for refusing to drop a sexual assault complaint against the principal of an Islamic school.

Judge Mamunur Rashid of the Women and Child Repression Prevention Tribunal found school principal Siraj Ud Doula and the others guilty of either killing Nusrat Jahan Rafi, 19, or ordering her death in April.

The verdict was read out in a packed courtroom in Feni district on Oct. 24. All the defendants, including a local ruling party member and several students at the school, were present in court for the verdict.

The judge also fined each of them 100,000 taka (US$1,190) and ordered the district magistrate to hand the money to the victim’s family.

Her mother later filed a case at the local police station and Siraj was arrested. This prompted supporters and madrasa students loyal to Siraj to harass and intimidate Nusrat and her family to withdraw the case.

The court was told that on April 6, upon an order issued by the principal from jail, five burqa-clad people lured Nursat to the rooftop of the madrasa, tied her up, doused her in kerosene and set her on fire after she refused to withdraw the complaint.

The attackers wanted to pass it off as a suicide, but Nusrat managed to make it down a staircase engulfed in flames and get help before telling her brother what had happened in an ambulance. Having suffered 80 percent burns, Nusrat died four days later on April 10.

A massive outcry from a horrified public followed that included street protests and calls on social media for the swift arrest and punishment of the perpetrators. The calls prompted the authorities to fast-track the case.

The victim’s family said the death sentences were richly deserved.

“Justice has been delivered for brutality committed against my daughter, and now we want to see the sentence carried out,” A.K. Musa, Nusrat’s father, told reporters.

Defense lawyer Giasuddin Nannu called the verdict “unfortunate and unexpected” and said all 16 would appeal. “We expect the High Court will acquit them all,” he said.

Rights activists hailed the verdict as a landmark judgment in a country that has seen rising sexual assaults and rape against women and children in recent years.

There were 2,083 reported cases of sexual violence against women and children in the first six months of this year, making 25,222 reported cases since 2014, according to Bangladesh Mahila Parishad, a women's rights group.

“Sexual violence against women and children mostly goes unpunished because a culture of impunity exists, but this case garnered so much public attention that forced the government to take speedy action,” Holy Father Liton H. Gomes, secretary of the Catholic bishops’ Justice and Peace Commission, told ucanews.

The death penalty is “morally unacceptable” but the judge delivered the sentence as money and politics often offer the chance for sexual crime offenders to walk out free, the priest noted.

“The speedy trial should not be a lone example to appease public outrage. It must be a springboard against a systematic denial of justice and culture of impunity in cases of horrific crimes like sexual violence and murder,” Father Gomes added.

Nur Khan, a Dhaka-based rights activist, had mixed views on the verdict.

“On moral grounds, the death penalty is unacceptable. However, on legal grounds, the swift trial and severe punishment in this case is a rare case that sends out a strong message to people that such crimes are heinous and should not be tolerated,” Khan told ucanews.

Khan, however, criticized the death penalty being handed to all those convicted. “Whether they all committed the same level of crime or deserved the death penalty is questionable. The judge might have been highly influenced by public sentiment, which does not bode well for the justice system,” he said.