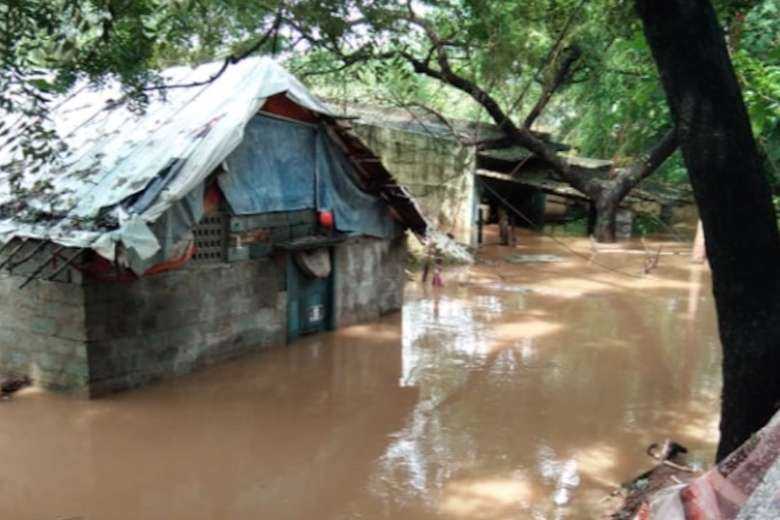 A flooded village in Kadapa district of Andhra Pradesh state, where more than 130 people are feared dead after heavy rains and floods since Nov. 19. (Photo supplied)

Father Talari Balaraju, director of Kadapa Diocese’s social service society, said the death toll was calculated from local reports, contradicting the government's claim that there had been only 33 deaths.

“We have been receiving massive rains in the past week and it was aggravated on Nov. 19 when Annamayya Dam on the Cheyyeru River was breached, flooding hundreds of villages downstream,” the priest said.

He and about 50 volunteers are preparing food, medicine, clothing and other articles to be distributed among people who lost everything in the floods.

“Our people say many from their families or friend circle are missing and they have no whereabouts for them. Our reports show at least 130 have perished,” Father Balaraju said.

“We are unable to reach many marooned villages as roads connecting to them have been washed away. Thousands of people have lost homes and everything they had. We do not know exactly how many have died and how many are missing as many people are stranded.”

The coastal district of Kadappa and neighboring Nellore are the worst hit, according to Father Balaraju.

The dam breach led to the flooding of hundreds of villages, damaging standing crops on close to 1,500 hectares.

Father Balaraju said initial reports suggest that over 2,275 families are affected while 1,435 have lost their homes.

“Our churches and other institutions in the low-lying areas are submerged and many of the missionaries working in such areas have reportedly moved to safer areas and are coordinating rescue and relief operations,” he said.

“Our main aim is to arrange food, water, clothing and emergency medicine to those in relief camps or houses of friends and relatives.”

The priest and his team have gathered details of 600 families who lost their houses and are gathering relief materials as government aid has not reached them.

‘We are pooling our resources and trying to feed those within our reach as no one has been able to help them as roads connecting to them were either washed away or damaged or blocked by uprooted trees and electricity polls,” said Father Bosco.

Dozens have died since October in India after heavy rains triggered floods and landslides.

At least 42 people were killed last month when heavy rains battered Kerala, and on Nov. 19 authorities in the state halted entry to Sabarimala, one of Hinduism's holiest shrines, due to heavy rains in the area.

Hundreds of devotees have been making the trek to Sabarimala since the shrine opened last week for the annual two-month-long pilgrimage season.