Around 50 people were crammed into the truck, most of them in the open tray, when it veered off the road and into a tree Residents look at the wreckage of a truck that overturned killing at least 11 people onboard when the driver lost control after the brakes apparently failed on a downhill section of road in Balingasag on the southern island of Mindanao. (Photo: AFP)

At least 11 people were killed after a small truck packed with partygoers, including children, overturned in the southern Philippines, police said today.

The vehicle was traveling to a beachside resort on Mindanao island for a postponed Christmas party on Jan. 12 when the driver lost control after the brakes apparently failed on a downhill section of road.

Around 50 people were crammed into the truck, most of them in the open tray, when it veered off the road and into a tree.

The vehicle then flipped over onto a pile of rocks, Balingasag municipal police chief Major Teodoro De Oro said.

Eleven people were killed, including a three-year-old child, De Oro said, adding police were seeking to confirm another three deaths.

Scores of other passengers were injured, including a dozen children. The driver, who was also hurt and tried to hide after receiving medical treatment, was arrested and will face charges.

The vehicle was part of a convoy of three trucks but the other two were not involved in the accident, De Oro said.

Deadly road mishaps are common in the Philippines, where drivers frequently flout the rules and vehicles are often poorly maintained or overloaded.

In 2019, 19 farmers were killed in the mountainous northern Philippines when a truck carrying them and sacks of rice seeds plunged backwards down a deep ravine. 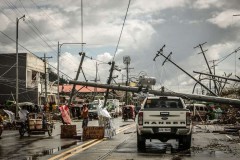 Bishops call for days of prayer for Philippine storm victims