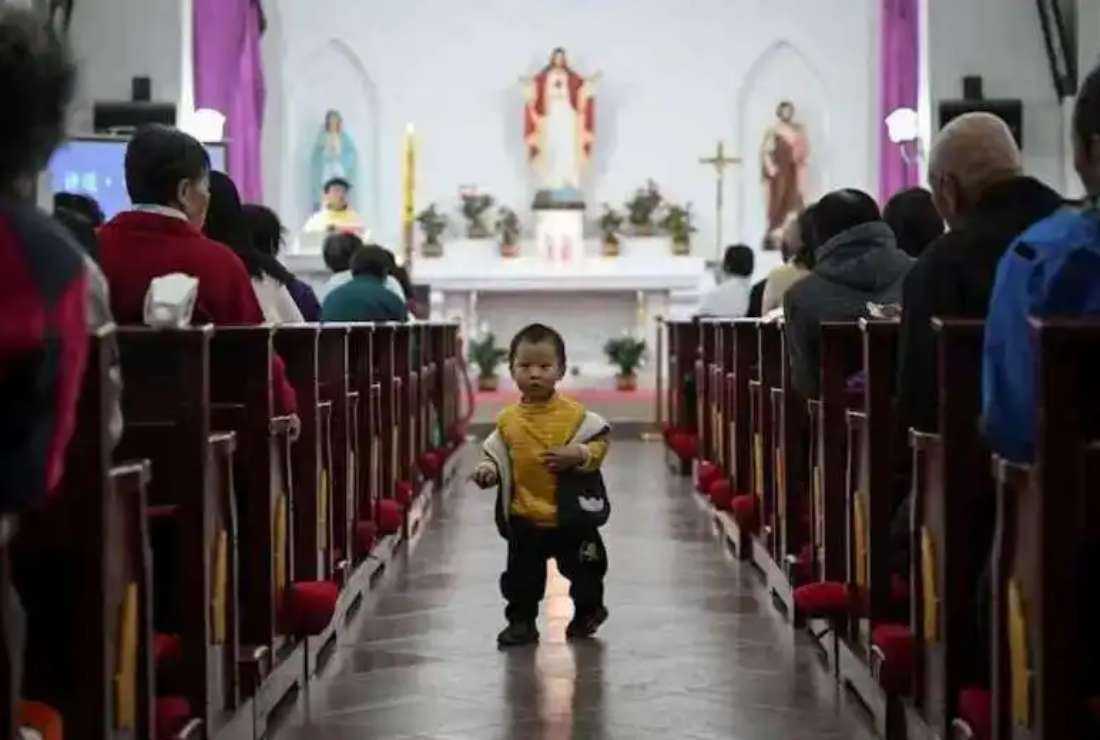 A Chinese boy walks down the aisle during a Mass at a Catholic church in a village near Beijing on Holy Saturday, April 3. (Photo: Jade Gao/AFP)

The Archdiocese of Beijing has marked the reopening of the cathedral church after a six months closure due to the Covid-19 pandemic by baptizing 101 new Catholics.

Archbishop Joseph Li Shan of Beijing led the reopening ceremony of the Immaculate Conception of Our Lady Cathedral on July 16. In the evening, Archbishop Li baptized the new Catholics, mostly adults, and also administered other sacraments including Communion and Confirmation, Fides news agency reported.

Hundreds of Catholics, both young and old, lined up in front of the cathedral gate in the morning, visibly enthusiastic to resume spiritual, liturgical and pastoral activities as the government eased Covid-19 regulations.

Many Catholics took time to pray in front of the grotto of Our Lady of Lourdes at the church in China's capital before entering the cathedral itself.

The cathedral complex, with the church, the courtyard and the sacristy, were again filled with prayers, spiritual songs, smiles and "noise" of the children.

Emotion and joy were evident on their faces and those of the community, but also on those of the catechists, priests, nuns and lay volunteers who accompanied them on their journey of faith during the pandemic, overcoming a thousand difficulties, Fides reported.

"State-sponsored persecution and bullying of Christians have intensified"

Archbishop Li reminded the faithful to live the gifts of baptism in their lives.

"Through baptism, you are children of light, through confirmation you are sent by Christ. Baptism is not a mere ritual, but an interior conversion. Live an authentic life of faith now, put on a new spirit and a new identity, which is Christian ... you shall be the light of the world and the salt of the earth, incarnating Christ and bearing witness to our Lord with love and works".

The prelate also pointed out that as Christians they must be ready to give witness of faith amid difficult situations.

The new baptisms in Beijing have reportedly enthralled the local Catholic community at a time when the state-sponsored persecution and bullying of Christians have intensified as the Chinese Communist Party escalates a crackdown on religions in the country.

Catholic bishops have been arrested and remain imprisoned in secret locations.

Meanwhile, Father Joseph Zhao, the parish priest, thanked all those who followed the long journey of faith and asked everyone to continue to protect these "new seedlings" of the community so that they can grow together in the Church on the path of synodality.

It is believed that Nestorian missionaries brought the Christian faith to China after their arrival in the then-Chinese capital of Chang’an (Xi’an) during the rule of the Tang dynasty in 635 AD.

Franciscan friar Giovanni da Montecorvino arrived in Beijing in 1293 and established the first Catholic mission in China. The Russian Orthodox Church made forays into China in 1715 and Protestants in 1807.

The Chinese Academy of Social Sciences reported in 2010 that China had 13 million Protestant Christians.

The Holy Spirit Study Center of Hong Kong diocese estimated in 2012 that China has about 12 million Catholics.