Seeking to escape poverty, Catholics left Bhawal and forged a stronghold in the north 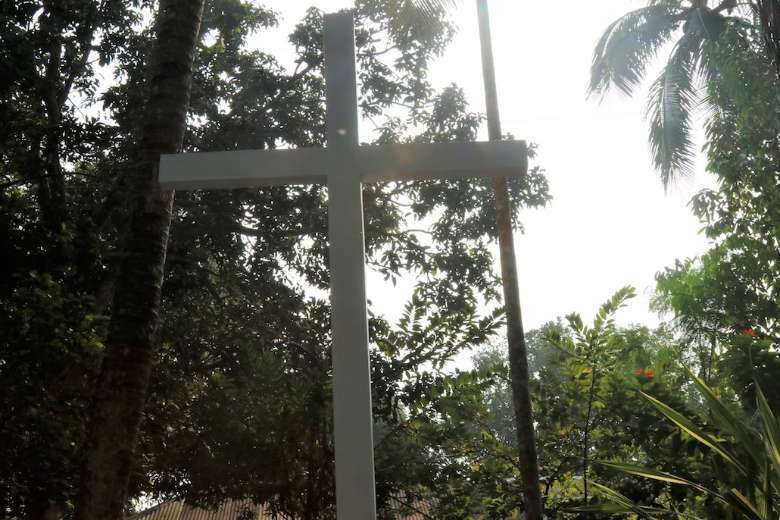 A memorial cross at St. Rita’s Church in Mothurapur of Pabna district marks the 100th year of migration of Bengali Catholics from central to northern Bangladesh. (Photo: Stephan Uttom/UCA News)

From a humble beginning, migrant Bengali Catholics in northern Bangladesh have thrived in a new bastion of Christianity with their faith defying socioeconomic adversity.

About a century ago, many Bengali Catholics from Bhawal, one of Bangladesh’s largest and oldest Catholic strongholds covered by Dhaka Archdiocese, migrated to Pabna and Natore districts to escape poverty and seek economic prosperity.

Altogether, these parishes have 14,000 mostly Bengali Catholics, collectively called “neo-Bhawal” in a reference to their original roots. They now belong to Rajshahi Diocese, a predominantly indigenous area with 67,700 Catholics.

The Bhawal area of Dhaka is a collective of eight parishes with more than 40,000 Catholics who make up one of the country's major Catholic bastions. Christianity in the area dates back to the 17th century thanks to the evangelization of Catholic missionaries, particularly Dom Antonio.

Antonio was the son of a Hindu king who converted to Catholicism and was credited with converting 30,000 to 40,000 lower-caste Hindus in the Bhawal and Atharogram areas of Dhaka in the 18th century.

Migrant Bengali Catholics in Rajshahi trace the roots of their Christian faith and associated culture to Bhawal.

The migration was significant for the local Church, according to Father Dilip Stephen Costa, a historian and parish priest of St. Rita’s Church.

“They migrated due to socioeconomic reasons, not for preaching faith to others. But they have carried and sustained their faith and earned the trust and confidence of people of other faiths,” he told UCA News. Missionaries spread the faith in Bangladesh Father Costa, who hails from local Borni Parish, said that despite poverty migrant Catholics have been very religious-minded, prayerful and church-centric, traits they inherited from their ancestors in Bhawal. They set up small churches for worship and their thirst for Christ drew the attention of missionaries.

In 1928, priests from the Pontifical Institute for Foreign Missions (PIME) started serving Bengali Catholics as they did in other parts of Rajshahi Diocese and neighboring Dinajpur Diocese.

“Besides spiritual and pastoral services, missionaries found people were interested in education, so they set up schools and started cooperative societies to instill a savings mentality. Thanks to their efforts, Catholic communities have flourished with education and development,” Father Costa said.

The PIME missionaries, however, didn’t attempt to convert local Muslims or Hindus but nurtured the faith of migrants.

“They realized it was illogical and unacceptable to evangelize among established faiths. Instead they helped Christians to be honest and forge friendships with other faiths. They set up three schools where non-Christians started studying, which improved the image of Christians,” Father Costa added. Ignatius Gomes, 70, is the grandson of one of the first migrant Bengali Catholics. (Photo: UCA News)

The flow of Bengali Catholics’ migration to northern Bengal started in the 1920s.

Paul Gomes, a famous hunter from the Kaliganj area of Gazipur district, was among the first migrants. In 1920, he was thrilled to learn that a zamindar (landlord) in Pabna district was hiring hunters for handsome rewards — money and land.

Polu Shikari (Paul the hunter) killed many tigers, wild pigs and large snakes with guns. He traveled with his two brothers more than 200 kilometers, on foot and by boat, to work for the landlord.

Land in the area was cheaper than in Bhawal, so they invited their relatives to come and settle in the area.

The exodus continued in the following decades and hundreds of mostly poor Catholics from other parishes of Bhawal settled in Pabna and Natore.

Ignatius Gomes, 70, a member of St. Rita’s Church in Pabna, is the grandson of one of Paul Gomes’ brothers.

“My grandfather was the youngest of the three brothers and my father was only 11 when they came here. They struggled against many challenges including poverty, illiteracy, unemployment, diseases and lack of spiritual and pastoral care,” Gomes told UCA News.

As there was no church, the brothers made a tiny hut and used it as a chapel for prayer. In the absence of priests, some early Catholics joined a Protestant church. Later, Holy Cross missionary priests from Dhaka started visiting them sporadically.

The Church started gaining strength when PIME missionaries from Rajshahi district arrived in 1928, which marked a new era for local Catholics.

Church sources say about 80 percent of Catholics in Rajshahi are literate and “neo-Bhawal” parishes have higher rates of literacy. Most local Catholics are self-sufficient thanks to regular jobs and income from agriculture.

Many local Catholics have migrated to capital Dhaka for education, jobs and business, but they keep close ties with their families and communities back home.

Suklesh George Costa, a Catholic from Bonpara Parish and regional director of Caritas Rajshahi, noted that the journey of migrant Christians could not have been successful without support from early missionaries.

“In every field including education, health, social development and social acceptability, the missionaries played a vital role. Sometimes I wonder how those great men of Europe walked mile after mile and offered committed services to people,” he told UCA News.

Costa, however, lamented an increasing lack of religiosity and social commitment among Catholics, especially the younger generation, in recent times.

“Once there was no church, but people prayed regularly and had strong faith. Maybe today people have fewer challenges, so they are less bothered about faith. But there are still people who hold faith strong and help the Church to stay alive,” he added. While Catholics kept their faith in their new home, they also sustained their distinct ancestral culture and lives of simplicity.

They continued traditional customs of socializing during births and weddings, maintained social communions to help each other in times of need and celebrated religious feasts like Christmas and Easter by arranging social programs like Boithok (yard gathering). They enjoy popular religious music like Thakurer Geet (Ballad of St. Anthony of Padua) and Hindu-style kirtan (carols).

Catholics are also involved with cooperatives and social and cultural organizations, offering them opportunities for leadership and community development.

Once cut off from Bhawal by poor communications, local Catholics have restored their relationship with their roots in the form of marriages and social exchanges in recent decades.

Suklesh Costa, however, pointed out that renewed connections with Bhawal also brought rivalry and competition among Catholics.

Meanwhile, K.M. Zakir Hossain, a Muslim politician and mayor of Baraigram municipality in Natore, praised Christians for their contributions to social development and harmony.

“Christians have played an important role in development as missionaries set up education institutes and hospitals that benefited people of all religions. Their efforts have been vital in helping people of all faiths to live in harmony,” Hossain told UCA News.

“I don’t know how beneficial their migration turned out for them, but I believe it was a blessing for our area.”