10 die of Covid-19 in India after Muslim conference

Tablighi Jamaat in Delhi ignored government orders to host a gathering attended by up to 1,700 people 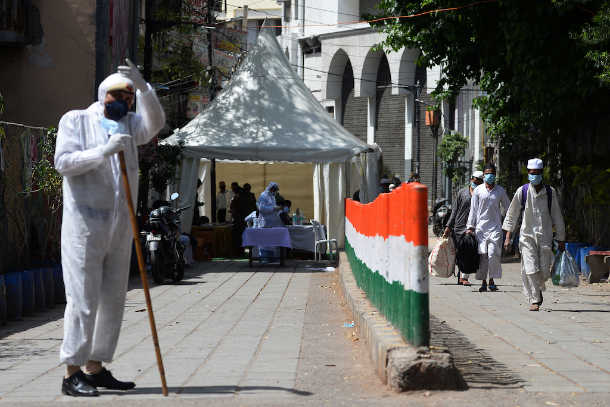 A policemen gestures as men wearing protective face masks walk to board a special service bus taking them to a quarantine facility amid concerns about the spread of the coronavirus in the Nizamuddin area of New Delhi on March 31. (Photo: AFP)

Indian police in the national capital have cordoned off the headquarters of an Islamic missionary movement after 10 people died from coronavirus after taking part in a religious conference.

Tablighi Jamaat in Nizamuddin in south Delhi hosted a conference from March 13-15 that was attended by up to 1,700 followers from India and abroad.

Nine Indians and one Filipino who attended have since died. Six of the Indians were from Telengana state, while the others were from Tamil Nadu, Karnataka and Jammu and Kashmir, officials said.

Many participants continued to stay in the building even after the event finished, according to reports.

Satyendar Jain, Delhi’s health minister, said that between 1,500 and 1,700 people attended the event. About 1,300 have been evacuated from the building. Of these, 334 have been admitted to hospitals with symptoms of coronavirus, while a quarantine center for 700 people has been set up.

Police, health and municipal authorities are trying to detect and limit the spread.

The headquarters of the Tablighi Jamaat, known as Bangle Waali Masjid, has been sealed and all the remaining members are being screened for Covid-19 symptoms.

“It is very sad and unfortunate because we have lost precious lives. If the government and people been alert, it would not has happened, but we are ready to help and cooperate with whatever we can do at this difficult time,” Shabnam Hashmi, the founder of ANHAD (Act Now for Harmony and Democracy), told UCA News.

The Muslim social activist said “it is not a question of blaming anyone, but the government and the whole world knew about the coronavirus. Reports were already there at the beginning of the year. If the government was serious about it, it would have sealed all the airports in the country.

“It is the duty of all to be alert during this period when the country is fighting the pandemic. We all have to join hands and collectively fight it — it is not only for any particular communities.”

Tablighi Jamaat tries to replicate the way Muslims lived in the time of the Prophet Muhammad. It was started in 1926 in Mewat province by Islamic scholar Maulana Muhammad Ilyas. Followers are asked to visit areas in groups and enlighten locals about their role and responsibilities as Muslims.

Delhi Chief Minister Arvind Kejriwal has ordered a first information report against the cleric who was leading the conference, sources said.

Earlier this month, the Delhi government banned religious, social, cultural and political gatherings as well as protests comprising more than 50 people until March 31 in view of the coronavirus outbreak.

Father Denzil Fernandes, director of the Jesuit-run Indian Social Institute in New Delhi, said: “I would say that this is a total failure of government as well as the organizers because news of coronavirus was already there and I think they failed to grasp the situation.”

Coronavirus and a Church of paradoxes