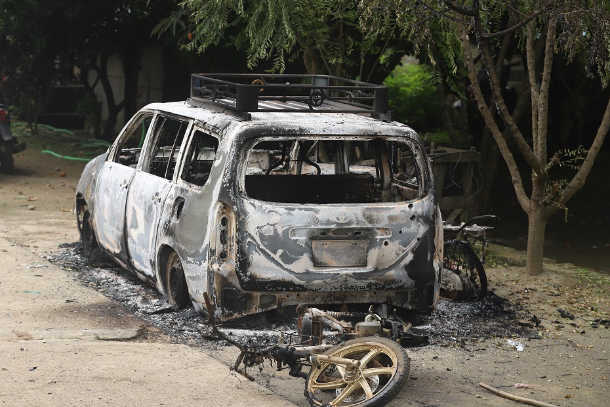 A damaged vehicle seen at a drug control checkpoint in Naung Cho, Shan State, on Aug. 15, after it was attacked by ethnic rebel groups. At least 14 have been killed in ongoing fighting since Aug. 15 between Myanmar's military and rebels. (AFP photo)

About 1,000 people have fled their homes and taken refuge at religious sites as renewed fighting erupted in Myanmar’s Shan State.

Aid workers said that more than 300 people were sheltering on Aug. 19 at a Catholic church in a village in Hsenwi township, while 700 people were at Mansu Shan Buddhist monastery in the town of Lashio.

It followed three days of fighting between the military and three northern alliance groups: the Ta’ang National Liberation Army, the Arakan Army and the Myanmar National Democratic Alliance Army.

Eddie, project coordinator of Karuna Lashio, a branch of Caritas Myanmar, said people started on Aug. 17 to flee their homes and take refuge at the church. Most, he said, were ethnic Kachins.

He said Karuna was arranging to send cash and food to the internally displaced persons (IDPs) as they cannot travel there due to roads being blocked by the authorities citing security fears.

“We can’t tell exactly how long they [IDPs] need to stay in the church as fighting has spreading in several townships,” Eddie told ucanews.com.

Gum Sha Awng, a spokesman for the Joint Strategy Team, an alliance of nine humanitarian groups, said fighting had erupted in northern Shan State on Aug. 18 and was still continuing.

“We are monitoring the situation to respond to the relief works of new IDPs but the blockage of routes has been our main challenge so far,” Gum Sha Awng told ucanews.com.

On Aug. 17, a rescue worker from Lashio, the largest town in northern Shan State, was killed when the vehicle came under attack by sniper and artillery fire, according to a report in state-run media.

Myanmar’s government says the recent attacks by rebels have impacted upon the country’s peace process but the door remains open for talks. Aung San Suu Kyi, the leader of the National League for Democracy and the de facto prime minister, has pledged top end the decades-long armed conflict but peace remains elusive and renewed clashes have undermined her peace initiatives.

Fighting continue to plague many ethnic-minority states, especially in Shan, Kachin and Rakhine, where thousands of IDPs remain in camps.

Clashes between the Myanmar military and Arakan Army have displaced more than 33,000 people in Rakhine and Chin states since November 2018.