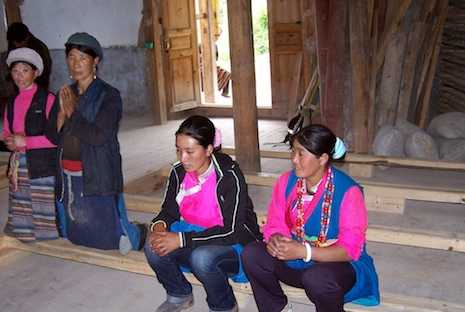 Two Tibetan women pray in a Church in Yunnan province

When Bosco Wang took a job at a garment factory in Cixi city in 2000, he noticed that during Sunday Mass many parishioners recited the rosary instead of following the protocols of worship and listening to the homily.

He later discovered that the parishioners were migrant workers like himself, from numerous provinces, who could not understand the Ningbo dialect of the priest.

Wang himself had a similar experience during the 1990s when he worked in Guangdong province and opted to worship at a Protestant Church whose pastor spoke Mandarin, rather than at a local Catholic Church where the priest spoke Cantonese.

Migrant workers must adapt to a host of challenges when they relocate from their familiar homelands. Everything from food, climate, local customs and language reinforce their feelings of being an outsider – even from one’s church.

“It was a bitter feeling to rejoin my Mother Church only on important feasts,” Wang said.

Language is just one of the many barriers facing the estimated 260 million migrant workers who relocate from rural provinces to seek employment in urban areas across China.

Mandarin is the official language, but there are more than 80 dialects spoken.

Growing urbanization of China’s once predominantly rural population has become a pressing issue for the country in its transformation to a modern and open economy, a shift initiated in the late 1970s.

In 2011, city populations overtook rural ones for the first time in the country’s history, with 51.3 percent of Chinese now residing in densely packed urban areas.

This shift has created a host of social problems, including safe housing, employment and residential permits, which government officials have been trying to resolve.

On August 30 this year, Premier Li Keqiang met with a team of specialists from the China’s Academy of Sciences and Academy of Engineering to evaluate an investigation conducted by more than 100 researchers over the course of a year.

According to a report by the official Xinhua New Agency, Li told the specialists that in light of increased urbanization, greater attention needed to be paid to increase respect for the law, to better coordinate the development of small cities and towns, and to enhance the quality of life.

But urbanization and mass migration also takes its toll on religious life, as priests struggle to provide adequate pastoral care to their parishioners.

In Bosco Wang’s case, a critical problem was one of language. He urged his parish priest to celebrate the evening Mass in Mandarin to accommodate the growing migrant community within the church.

It took several years, as well as the arrival of a new parish priest, who skillfully resolved resistance from elderly laypeople who preferred the liturgy to be said in the local dialect.

Today, there are 500 Catholic migrant workers in Cixi, an important manufacturing hub, with around 100 of them attending Sunday Mass regularly. They also have weekly gatherings, offer charity services and conduct pilgrimages and festival celebrations.

The migrants have gained access to a more textured spiritual life simply because of a change of language.

“This experience tells me that it is very important for priests to accept migrants and show concern for the challenges they face,” Bosco Wang said.

The church in Cixi embraced the migrant workers, but in many other parts of China, both urban and rural, the church communities have shown less willingness to change.

Moreover, urbanization has taken a toll on rural parishes. China has more than 31 million Christians, but most reside in cities.

In rural areas, most able-bodied men have left to find jobs in other provincial cities. Their absence puts a strain on their families, with children and the elderly requiring care.

The predominantly Catholic Erquanjin town in Hebei province used to have about 2,200 residents, but only about 100 Catholics remain.

In contrast, city church populations are thriving because they are “receiving new faces every week” from the countryside, said Fr Joseph Wang of Yuci diocese in Shanxi province.

“Even the parish priest cannot be sure how many parishioners he has,” he added.

As city congregations grow, rural ones diminish. Even the villages in which they were based have begun to vanish.

According to Dr Huang Jianbo, professor of anthropology at Renmin University in Beijing, about 80 to 100 villages have ceased to exist each day in the last decade as more people move to cities.

Church workers say the Church in rural China struggles to provide for those left behind, while city congregations struggle with social rifts between privileged elites and poor rural migrants.

The less educated rural Christians have found themselves estranged “in a new church setting and an unfamiliar expression of the same faith in terms of different ways of understanding, approach and experiencing God,” said Dr Huang.