Sacred Heart Church in Keamari is a British colonial-era Catholic Church in Pakistan’s Karachi Archdiocese that boosts 160 years of history marked with the advent, expansion, and persecution of Christians.

The church was established in 1862, about 85 years before the British partition of India and Pakistan. The present Church structure was erected in 1922 to cater to some 200 Catholic families. Catholics in the areas now covered by Pakistan were approximately 19,000. A Catholic school – Sacred Heart School was established in 1923 to offer quality education to children of Christians and other communities.

In 1969, a fatal fire gutted the church, and its origin remains unknown. When the church was rebuilt in 1922, it received financial assistance from the state-run Karachi Port Trust. However, when the church was razed in the fire, no such support was available. Catholics, however, managed to mobilize funds to rebuild the church again.

Sacred Heart Church has a vibrant pastoral life and runs various charitable organizations like St. Vicent de Paul Society to assist the poor and the Apostleship of the Sea to oversee the mariners. In 2019, Pope Francis appointed a former parish priest, Father Indrias Rehmat, as the bishop of the Faisalabad Diocese.  In 2020, the church experienced an expansion when three Christian neighborhoods -- Shireen Jinnah Colony, General Colony, Railway Colony, and St. Mary’s School from St. Anthony’s Church were included in the Sacred Heart Parish. A close-up view of the main altar at the Sacred Heart Church in Keamari, Pakistan (Photo: Facebook)

This heritage-listed church has witnessed persecution. In November 1990, a fanatic mob attacked the church and brutally beat up the parish priest, Father Bruno Sequeira. The mob allegedly attempted to throw Father Sequeira into the raging fire. The attackers ransacked the church, and a bonfire was made with the pews of the church.

On Jan. 6, 2009, burglars broke into the church and made their way with valuables worth 80,000 rupees that included the chalice, a brass cross, the sound system, and emergency lights. The church vessels were later recovered and consecrated in the church in 2010 during a special Holy Mass.

Sacred Heart Church still stands tall as a relic of faith and a repository of the good and bad times of Catholicism in Keamari. 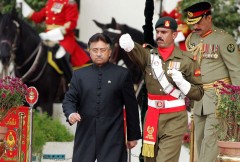 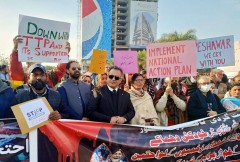