With an area of 6,772 square kilometers, Vinh Long diocese covers the provinces of Ben Tre, Tra Vinh and Vinh Long, and part of Dong Thap province. It is part of the Ho Chi Minh City Ecclesiastical Province, which includes Ho Chi Minh City Archdiocese and eight suffragan dioceses in southern Vietnam. The diocese was established on Jan. 8, 1938.

Catholicism in the region dates back to 1723 and was introduced by foreign Franciscans. The first local Holy Cross Lovers congregation was set up in 1800 in Cai Nhum, a place that had long been regarded as a mission center. Local Catholics were severely persecuted for their faith by feudal authorities, and people opposed the religion during the period 1833-1872. Among those martyred were Saints Philippe Phan Van Minh, a priest, and Joseph Nguyen Van Luu, a lay leader.

The diocese is known for its pilgrimage sites such as Our Lady of Perpetual Help Shrine in Ben Tre Province, Our Lady of Fatima Shrine in Vinh Long town, and the Shrine of Dinh Khao dedicated to native Martyr Philippe Phan Van Minh, the diocese's patron.

Most residents are Kinh, or majority Vietnamese, with some ethnic groups of Chinese and Kh'mer origins. Hoa Lac parish in Tra Vinh province is home of 100 ethnic Kh'mer Catholics.

The diocese is located in the Mekong delta and the land is crisscrossed by canals and rivers. People travel by both road and boat. The region has two seasons. The hot season lasts from November to April, and the rainy season from May to October. During the rainy season, local people suffer much because of floods. The average annual rainfall is about 1,000-1,500 millimeters.

Please love yourselves and caregivers amid pandemic
28 Jul 2021 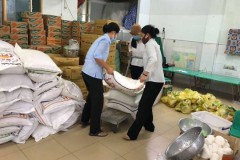