Phat Diem diocese was founded on April 2, 1901, but the seeds of the Gospel were introduced to the region as early as 1627 by Paris Foreign Mission (MEP) missioners.

The Phat Diem Cathedral complex with Oriental architecture, was built 1875-1898 under the supervision of the late Father Tran Luc. The main church itself was completed in 1891 long before it became the diocesan cathedral. Father Luc, also the designer of the wood and stone compound, served as the church's pastor until he died in 1899.

The church is surrounded by four chapels, and in front of it lies Father Luc's tomb. Between the tomb and a lake with a big statue of Christ the King in the middle of it stands a bell tower also in Oriental style.

Behind the church and the chapels are various grottos. At the far left corner of the complex is another stone chapel.

In 1988, Vietnam's Ministry of Culture and Information declared the cathedral complex a national cultural and historical site.

In recent years, the cathedral complex has become a pilgrimage site for Catholics throughout the country and also a tourist site for foreigners.

Some other churches in the diocese were also built in Oriental style.

In addition to beautiful caves, there are relics of the old capital of Vietnamese Kings (968-1010) and their temples in the diocese.

The diocese has an area of 1,786.77 square kilometers and covers the whole of Ninh Binh province and Lac Thuy district of Hoa Binh province.

In addition to Kinh (majority Vietnamese), there is only the Muong ethnic group residing in the diocesan territory.

The climate is hot and cold with a yearly average temperature of 24 degrees Celsius. Its annual precipitation is 2,000 millimeters. 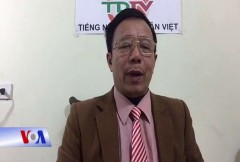