The Roman Catholic Diocese of Chiang Rai  is in the north-eastern region of the country, will include four provinces (Chiang Rai, Nan, Phayao, and Phrae), as well as the district of Ngao of the province of Lampang.

It is a suffragan diocese of the Archdiocese of Bangkok.The episcopal see will be in Chiang Rai. The Nativity of Our Lady parish church in Chiang Rai will be the Cathedral Church of the new circumscription.

The diocese was erected on 25 April 2018, when it was split off from the Diocese of Chiang Mai.

Route 1 runs from Bangkok through Chiang Rai to Mae Sai on the Burma border. Chiang Rai is 839 kilometers from Bangkok, about 14 hours by car or by bus. According to official bus schedules, the bus ride to Chiang Rai from Chiang Mai takes approximately 3 hours and 30 minutes, All of these times should take into account the rainy season which lasts from about June to late October, this can severely inhibit travel with road sections often completely flooded and even washed out.

Several flights are available to and from Bangkok daily. Mae Fah Luang International Airport flight time is about 1 hour and 30 minutes. There are several major operators including Thai Airways, Air Asia, Nok Air.

There is scheduled boat service between Chiang Rai and Thaton in Chiang Mai Province daily. This journey will last about 3–4 hours and is a pleasant alternative to the bus ride through the mountains.

There are currently no rail services to Chiang Rai as the railway line from Bangkok ends at Chiang Mai. There have been talks of extending the rail line from Den Chai to Chiang Rai in the near future, but this is unlikely to happen as the city's population is well below 1 million and there aren't as many international tourists visiting Chiang Rai as Chiang Mai.  Also there are no major industrial complexes in the region as it is largely a rural economy.

Chiang Rai lies on the flat alluvial plain of the Mae Kok River, a tributary of the Mekong, between the Daen Lao Range in the north and the Phi Pan Nam Range in the south. The Mae Kok River runs along Chiang Rai's north side, flowing eastwards out of Burma at Tha Ton town, bending north-eastwards and joining the Mekong River about 40 kilometres (25 mi) north-east of the city. The Lao River, a tributary of the Kok, flows south of Chiang Rai.

There are four bridges spanning the Mae Kok river within the town's boundaries, each running south–north. Most of the terrain surrounding Chiang Rai town is either flat or has moderate hills. The exception is outward in the west and north-west directions, where limestone hills are evident, some of which have straight-up exposed cliffs. That is also the direction where most of the region's Hill Tribe people have their villages, further afield. 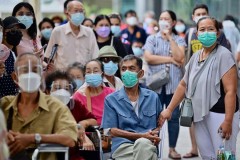