The diocesan territory stretches over a land area of 4,812.8 square kilometers and includes Kurunegala in North Western Province. About 85% of this diocese is rural and it is the commercial center of a coconut, rice and rubber plantation. The several main roads connect to various important parts of the country. Kurunegala is a central city in Sri Lanka and is directly connected to a large number of major cities and towns of the island.The principal rivers that run through this diocese are Deduru Oya, Ratambala Oya, Mi Oya and Maha Oya.

The name "Kurunegala" is a combination of kurune, meaning a tusked elephant, and ethagala, the name of a 316-meter high rock which towers over the town, located at an altitude of 116 meters above sea level. Ethagala resembles an elephant. Kurunegala's old name was Hasthishailya-pura.

Kurunegala was a royal capital of Sri Lanka in the 13th century. It is the "treasure house" of archaeology, having been the seat of four medieval kingdoms of Sri Lanka between the 12th and mid-14th centuries. Impressive remains of beautiful citadels, fortresses, palaces, temples, shrines, monasteries and hermitages can be found here.

Today, Kurunegala is an important crossroads town, astride the route from Kandy to Puttalam, and from Colombo to Anuradapura. It enjoys a pleasant location overlooked by huge rocky outcrops some of which have been given names of the animals they resemble: elephant rock, tortoise rock etc. According to a legend, during a time of drought, some animals threatened the city's storage capabilities by consuming huge amounts of water and were magically turned to stone. There are excellent views of a lake from the rock Ethagala.

Kurunegala diocese is adjacent to Anuradhapura in the north, Colombo in the west, Galle in the south, Kandy in the center. Kurunegala is a predominantly Buddhist area. The diocese was founded on 15th May, 1987. The number of priests when the diocese first began was 20. In 2007, there are 51 diocesan priests. Earlier, Kurunegala was under Chillaw diocese and later carved out as a new diocese. Kurunegala diocese's patron saint is St. Anne. The diocese covers the whole of North-Western province.

Standard Sinhala language is generally in use, while Tamil is used in some areas.

The climate is tropical monsoon, with about 1,800 millimeters of rain per year. Kurunegala's climate is fairly temperate and tropical all throughout the year. However during the month of April, the temperature can rise up to about 35 degrees Celsius. The only major change in Kurunegala weather occurs during monsoon seasons of May to August and October to January, when heavy rains occur. In general, temperatures from late November to mid-February are lower than for the rest of the year. 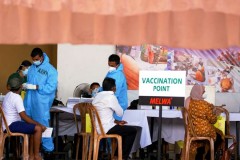