Parañaque diocese was one of two dioceses carved out of the Archdiocese of Manila. It was established on Dec. 7, 2002, during the term of the late Cardinal Jaime Sin. The diocese covers three cities -- Parañaque, Las Piñas, and Muntinlupa. St. Andrew's Cathedral, the oldest church in the area, is the seat of the diocese. The diocese currently has 47 parishes, one national shrine, one chaplaincy, and one quasi-parish clustered in six vicariates. Three vicariates are in Parañaque City, two are in Las Piñas City and one is in Muntinlupa City.

1,381,000, made up of native residents of the cities of Parañaque, Las Piñas and Muntinlupa, migrants from various provinces in the Philippines and foreign countries.

Land Area and Land Use
The diocese has residential establishments like ancestral homes, villages, apartments, boarding houses, townhouses, and commercial and industrial areas like malls, banks, offices, supermarkets, restaurants, and factories. There are also government offices and farming grounds.

The predominant language is Filipino (Tagalog) and a few speak Cebuano, Ilonggo, Bicolano, Waray, Pampangueno, and other dialects. English is understood, spoken, and used in official transactions by most residents as either a second or third language.

Hot summer months are from March to May and the temperature dips following intermittent rains and occasional winds from June to October. Cool and fair weather prevails from November to February.

Many people work in commercial establishments, government agencies and private companies. There are also areas with fertile lands that sustain farmers' livelihood. The Manila Bay provides fisherfolks with income from fishing and salt-making.

Clear reception of local and cable channels and radio frequencies throughout the area. There are nine active cellular sites.

The diocese is predominantly Roman Catholic but its lay organizations are active in social service programs together with other Christian denominations. Some Muslim communities are also scattered around the area and they interact with Christians in business transactions and certain community development projects. 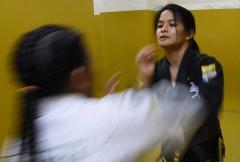