The Diocese of Mati today comprises the civil province of Davao Oriental, the easternmost portion of the Old Davao Province. It covers a land area of 5,146 square kilometers and a population of 626,000 of which 85 percent are Catholics. Its titular patron is San Nicolas de Tolentino. It has supervision over 19 parishes run by 46 priests.

In 2016, the population in the diocesan territory is 626,000. Among the ethnic groups, there are Mandaya, Mansaka, Manobo, Mamanua, Mangguangan and Tagacaulo.

English, Filipino, Cebuano, Davaweño, Mandaya, Boholano, Kalagan, Kamayo, Manobo, Hiligaynon / Illonggo, Ilocano and Waray are in use in the territory.

The Christianization of the Davao area in Mindanao is attributed to the arrival in the area of the Augustinian Missionaries in 1848. This was followed by the Jesuits and the PIME Fathers of Quebec. But it was the Maryknoll Fathers who finally arrived in the area in 1958 and settled down to the arduous task of evangelizing the inhabitants.

Early Spanish exploration of the Davao area can be traced back to 1528 when Saavedra visited the Sarangani Islands on the southwestern entrance to the Davao Gulf. He coasted along the shores of Davao Oriental where he established the first settlement, that of Caraga.

The early missionaries later settled in places like Caraga, Baganga, Cateel and the nearby areas, baptizing, giving the sacraments, building churches and convents. Some of these old structures can still be found today, and some of them are still serving their Christian communities.

The entire Davao Province was politically subdivided into three in 1967. From this subdivision emerged the provinces of Davao del Norte with Tagum as its capital, Davao del Sur with Digos as capital, and Davao Oriental with Mati as capital.

Ecclesiastically, the entire Mindanao area was under the Diocese of Cebu since 1595, until some parts were placed under the jurisdiction of Jaro in 1865.

On Feb. 16, 1984, Pope John Paul II created the new Diocese of Mati, taking part of its territory from that of the Diocese of Tagum. In November of the same year, the Most Reverend Patricio Alo, until then the Auxiliary Bishop of Davao, was appointed First Bishop of Mati. Meanwhile the Diocese of Davao had become an archdiocese, and Tagum and Mati were made its suffragans.

The faithful of the Diocese of Mati envision for themselves a full Christian maturity, giving Christian service to all, especially the poor and the oppressed, in accord with the Gospel Words of Jesus Christ.

About 300 years ago, Davao Oriental was merely a part of Caraga Province-forming part of the Encomienda de Bislig with the Encomienda de Seargao, Butuan and Tandag. The province became historically important in 1846, when a distinguished Attorney-at-Law, Don Jose Uyanguren-upon the order of Governor General Narciso Claveria, organized settlements with considerable inhabitants South of Encomienda de Bislig. Today, these are the Municipalities of Baganga, Gov. Generoso and Mati.

The settlement continued to grow. Don Jose was able to crush Datu Gago, a Muslim Chieftain who ruled Samal Island. In 1849, Governor Claveria decreed the partition of Caraga province into two: the Northern Portion was named Surigao Province town as the capital and the southern part as Nueva Vergara with Caraga town as its capital.

On July 1, 1967, under the Republic Act 4867, Davao was divided into three (3) provinces. Davao Oriental was created as a separate and independent province along with Davao del Sur and Davao del Norte.

The annual per capita income is (in Philippines Peso) 22,093 (USD495 as of April 2010). Davao Oriental is the copra (dried coconut meat) producer capital of the Philippines.

PHILCOM Corporation established its communication networks/facilities to augment the communication needs of the province. It serves NDD and IDD calls in two major calling stations in Mati and Lupon. Seven (7) additional calling stations are also located in Cateel, Baganga, Caraga, Manay, San Ignacio, Tarragona and Banaybanay operated by PHILCOM agents. Other telecommunication companies such as PT&T and RCPI are also present in Mati and Manay providing telegraph services and telephone booths for NDD and IDD calls.

There are eleven (11) established public calling offices under the Municipal Telephone Program of DOTC providing DD and IDD calls.

GLOBE and SMART cell sites are also strategically installed in every municipalities providing direct access to landlines and cellular phones.

The Literacy rate (simple literacy) is 88.94 percent in the diocesan territory. 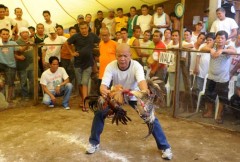