In a land area of 2,505.65 square kilometers, the diocesan territory covers the province of Southern Leyte and the six Municipalities of Baybay, Inopacan, Hindang, Hilongos, Bato and Matalom of the Province of Leyte.

Southern Leyte is a province of the Philippines located in the Eastern Visayas region. Maasin City is the capital of the province. Southern Leyte was once a sub-province of Leyte before it was divided from the latter.

While ethnicity of the province is widely Bisaya, most people of the province are farmers and fisherfolks.
In Panaon, an island situated in the southernmost part of the province, a certain aboriginal folks are found locally known as Kongking or variously called Mamanwa which means mountain people. They were believed to be migrants from Mindanao, inhabiting the portions of Agusan, after their migration from the island to evade militarization and the logging/mining corporations' intrusion to their ancestral domains in the early 1980s. Literally, their physical attributes are dark complexion, curly-haired and short in height. Hunting and gathering, mat weaving and rattan craft are among the main economic activities of the Mamanwas, so they prefer to inhabit the forested areas in the newfound Southern Leyte mountain. However, they were again displaced by threats of the recent incidents of landslides in the province.

Maasinhons and Southern Leyteños speak either the Cebuano or Boholano dialect. The speech variety however used by natives has also Boholano influences because of its proximity with the province Bohol. Furthermore, Tagalog and Waray-Waray are widely spoken as second languages. Natives also understood foreign language such as English and Spanish.

Comprises the province of Southern Leyte and the six Municipalities of Baybay, Inopacan, Hindang, Hilongos, Bato and Matalom of the Province of Leyte Titular: Our Lady of the Assumption.

On Aug. 14, 1968, the Diocese of Maasin was canonically erected through a papal decree issued March 23, 1968. In June of the same year, the Father Vicente T. Ataviado, D.D. who was up to then a parish priest of Masbate, Masbate, was appointed as its first bishop. He was ordained on Aug. 8, 1968, and installed as the First Bishop of Maasin on Aug. 14 at Our Lady of Assumption Parish Church in Maasin, the capital of Southern Leyte.

Thus the vision that was planted and took root when Father Pedro Valderrama celebrated the first mass in the Philippines on March 21, 1521, has borne new fruit, say the locals.

There are five designated bus terminals in Southern Leyte: Maasin, Liloan, Sogod, Hinunangan, and Silago. These terminals are just open spaces used by buses as parking/passenger waiting areas, and not equipped with buildings and other facilities.

Ceramics products and handicraft items made from abaca, coconut and bamboo.

Southern Leyte is characterized by relatively flat lands along the coastal areas where population centers lay, but rugged and mountainous towards the interior. It has numerous small rivers in addition to, at least, eleven major rivers which include Canturing River in Maasin City, Amparo River in Macrohon, Divisoria River in Bontoc, Subang Daku in Sogod, Lawigan and Hitongao Rivers in St. Bernard, Camugao River in Hinundayan, Magcasa River in San Juan, Das-ay and Pondol Rivers in Hinunangan, and Maag River in Silago.

Limasawa Island - It is located at the southern tip of Southern Leyte; can be reached by motorlaunch-ride from Padre Burgos in about 45 minutes. It is the historic site of the celebration of the First Catholic Mass in the Philippines when Ferdinand Magellan came in 1521, and the location of the historic Shrine / Marker where the blood compact was performed between Magellan and two other rulers.

Maasin Cathedral - Located in Maasin City; features olden images of saints which date back to the Spanish era.

Magsuhot Park - Located in Sogod and approximately 3 kilometers from the Phil-Japan Friendship Highway. This national park features a forested area of about 500 hectares. It has 4 waterfalls that converge into one basin.

Panaon Island - Located in Liloan; a part of the Mindanao Deep (second deepest body of water in the world!). An ethnic tribe called "kongkings"(small, curly-haired and dark skinned people) that is believed to be the migrants from Mindanao resides in this island. They normally come down from their mountain hideouts during market days to trade. 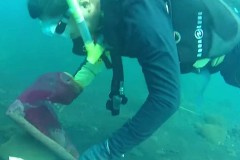