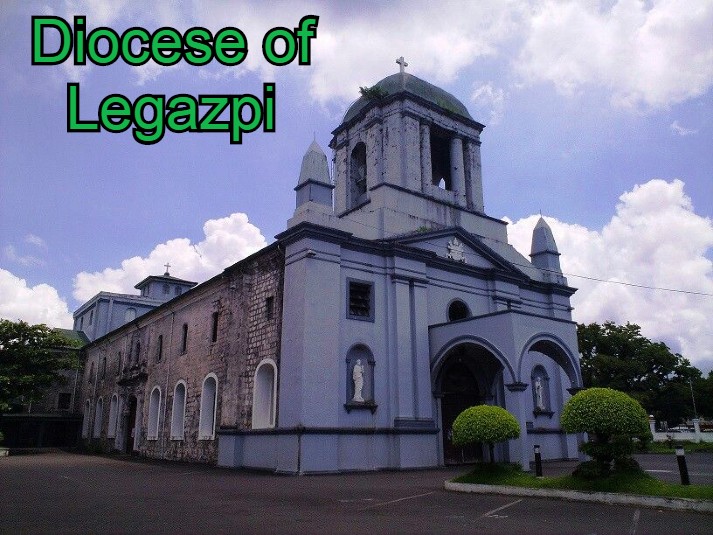 In a land area of 2,552.6 square kilometers with a total coastline of 354 kilometers, the diocesan territory covers the civil province of Albay. Legazpi is the capital of the Province of Albay located in the Bicol Region (Region V) in Luzon and the province borders the Camarines Sur to the north and Sorsogon to the south.

In the diocesan territory the total population is 1,462,000 at end of 2016. Ethnic groups are Kankanai, Kankaney and Kankanaey.

Bikol is the common dialect. There are other dialects spoken in the province, however, such as Bicolano Viejo, Daragueño, Legazpeño or Albayanon, Oasnon and others. The dialects spoken in the coastal areas of the province are similar to that spoken in Camarines Sur while those further inland are similar to each other but differs significantly from the coastal dialect. Majority of the inhabitants also understand Tagalog and English.

In 1991 the Second Plenary Council of the Philippines strongly recommended a National Pastoral Plan for adoption by all the dioceses of the country, after a thorough analysis of the pastoral problems confronting the Church. In April 1993, the Diocese of Legazpi, under the leadership of its new bishop, the Most Reverend Jose C. Sorra, began a process of reorganization of its pastoral structures in order to re-orient the local church to "building a community of Christ's disciples, with a preferential option for the poor through integral evangelization."

As various sectoral leaders of the church met to draw up plans and programs, it was recognized that the key leaders of the diocese working in institutions and at home, were in need of an integrated formation program that would promote a common understanding of the Diocesan Vision and Mission.

This proposed integrated formation program for diocesan leaders therefore aims to strengthen the capabilities of diocesan and parish workers to effectively translate the Diocesan Vision and Mission into operational programs and plans of action.

Clergy Formation is a series of seminar-workshops that will eventually cover a total of 100 priests all over the diocese. The activity aims to re-orient the clergy toward the vision of the Second Plenary Council.

Formation Program for Lay Leaders in Parishes envisions that all lay faithful, in partnership with the clergy and lay workers of the diocese, will become fully evangelizers at the same time.

Liturgy Commission will focus on formation seminars in three vicariates and the sending of two diocesan delegates to the National Liturgical Convention; a proposal for a local study grant for a priest to the Paul VI Institute on Liturgy in Malaybalay, Bukidnon; the production of cassette tapes for local distribution.

Family Life Apostolate through Christian couples, priests and laity, commits to the formation of Christian values centered on families.

Legazpi can be reached through land transport (by bus) from Manila in about 10 hours and an hour by air. Legazpi Airport serves as Bicol's gateway to Manila and the Visayas.

Going around in short distance may take jeepney and tricycle and by bus going to different areas in Bicol.

The Bicol Region will eventually get its own international airport that promises to spur and accelerate the region's economic development. The new Bicol International Airport will be developed on a 140-hectare prime land straddling the areas of Daraga and Camalig towns. The new airport site is deemed safe from the risks and threats entailed when the majestic Mayon Volcano erupts.

A modern road network linking the province to the Butanding town of Donsol in Sorsogon will soon be built as among the six critical road projects. The Guinobatan-Jovellar-Donsol road which is linked to the Maharlika Highway - aside from promoting the spatial integration of the provinces of Albay and Sorsogon into a more common economy - will serve as the principal road to Butanding-renowned Donsol town of Sorsogon, Albay.

Mayon rises 2,462 m (8,189 ft) above the Bicol Region of the Philippines and has a base circumference of 62.8 kilometers (40 miles). It is located right in the center of the Albay Province, 460 kilometers south of Manila. The Mayon is visible from nearly all cities and towns in the Albay Province. It is also visible from neighboring provinces. Mayon is a stratovolcano known for its almost perfect symmetrical triangle shape. It is commonly referred to as one of the natural wonders of the world. The upper slopes of the Mayon are steep, reaching up to 40 degrees in angle. The name Mayon is derived from the Bicolano word Magayon, which means "beautiful." She is one of the most active volcanoes in the Philippines.

The annual per capita income is 23,283 Pesos (as of November 2009 USD500). On Major Industries: The Embarcadero is a waterfront development located at the harbor area of Legazpi City adjacent to the alluring Kapuntukan Hill (also called Sleeping Lion Hill). Embarcadero will "activate" the waterfront creating an attractive and vibrant focus for the city's leisure and lifestyle activities. Embarcadero will function as a waterfront promenade, with theatrical lighting and performance spaces creating a lively, family friendly environment during the day and at night.

Albay is a major supplier of geothermal energy to the Luzon Grid with its Tiwi Geothermal Plant in Tiwi.

Regarding agriculture: The people sustain themselves mainly through rice and coconut farming. Coconut, rice, abaca, and corn are the major crops.

Handicrafts are the main source of rural income. The province is also known for its finely crafted jars and pottery.

The diocesan territory has two cable TV operators, DCTV (Digital Cable Television) and ESTV. There were 7 AM stations, 9 FM stations, and 2 TV stations through its affiliate station.

The literacy rate is 94.19 percent as of September 2008 according to National Statistics Office.