In the area of the Archdiocese of Jaro, the population is 3,177,462 at end of 2016. (The population of the whole country is about 108.7 million). Most residents are ethnic Aeta, Karay-a, Sulodnon or Bukidnon tribe.

Hiligaynon/Ilonggo is the language spoken in Iloilo City. English is used as the language of business and education but its use among the populance is fading that the average speaker needs remedial English courses to remain viable in the international job. In addition, Tagalog and other local dialects such as Karay-a (also known as Kinaray-a) are also spoken.

The Archdiocese of Jaro is the fifth oldest diocese in the country. It was created a diocese by virtue of a papal bull of Pope Pius IX on May 27, 1865.

Bishop Mariano Cuartero, a Dominican, took possession of the diocese on April 25, 1868. The new diocese then included the entire island of Panay (today's Capiz, Aklan, Iloilo and Antique provinces), Negros Island, Romblon and Palawan in the Visayas; Jolo, Zamboanga, Cotabato and Davao in the island of Mindanao. This vast territory was later divided to form new ecclesiastical jurisdictions: Zamboanga in 1910, Bacolod in 1933, Capiz in 1951 and San Jose de Antique in 1962.

On June 29, 1951, a papal bull by Pope Pius XII raised Jaro to an Archdiocese which comprises the civil Province and City of Iloilo and Province of Guimaras. The suffragans of the archdiocese are the dioceses of Bacolod, San Jose de Antique, San Carlos and Kabankalan. The Archdiocese of Jaro today comprises the entire civil province of Iloilo and the sub-province of Guimaras, a small island off its south eastern coast. With San Jose de Antique, San Carlos of Negros Occidental and Kabankalan, also of Negros Occidental, as suffragans. Out of its population of 2,333,141, 91 percent are Catholics. Its titular patron is St. Elizabeth of Hungary, whose feast is celebrated on November 17.

Ecclesiastically, the Archdiocese of Jaro holds some noteworthy historical notes showing the vibrant faith of its deeply Christian population. Its St. Vincent Seminary has produced one cardinal (Jaime Cardinal Sin), two archbishops and six bishops. In number of religious sisters it ranks second only to Manila; in number of parishes and secular priests it ranks third after Manila and Cebu. The first Carmelite Monastery and the first Trappist Monastery in the country were founded within the Archdiocese of Jaro.

The original Nichols Bridge was destroyed by floods spawned by typhoon "Frank" when it hit Iloilo province in June last year. Affected residents are now using the temporary detour bridge that was constructed under the Department of Public Works and Highways (DPWH) President's Bridge Program Office (PBPO) which was completed in November 2008. The new Nichols Bridge will be 150 meters in length and the superstructure will be precast concrete girder resting on bored piles. The bridge after completion will serve at least 17 barangays that are rich, rice producing and will provide easy flow of interaction among residents of these 17 barangays and the people in the area. The bridge will also connect Alimodian to the towns of San Miguel and Cabatuan and the Iloilo International Airport.

In a land area of 5,304 square kilometers, the diocesan territory covers the entire civil province of Iloilo and the sub-province of Guimaras, a small island off its south eastern coast, the southern and northeastern portion of Panay Island. Iloilo lies in the heart of the Philippines. This strip of land is cut by the Iloilo and Salog Rivers, looking like a nose, hence, the name "Irong-Irong," and later, Iloilo was given. To the north of Iloilo lies the Province of Capiz and Jintotolo Channel, Guimaras Strait washes its southern shores, to the eastern side, the calm waters of Panay Gulf and Iloilo Strait, and the Province of Antique is the western neighbor.

Iloilo is a province of the Philippines located in the Western Visayas, region VI. Iloilo is subdivided into 42 municipalities, 1 component city, and 1 highly urbanized city and 1,901 barangays. Cities: Iloilo City and Passi City.

The Legislative Districts of Iloilo, namely the first, second, third, fourth and fifth districts are the representations of the Province of Iloilo in the Philippine House of Representatives.

Main agricultural products include rice, sugar, mango, coconut, banana and corn but the potential is there for higher-yielding crops such as potato and black pepper. Iloilo sends its rice to neighboring provinces and even to other regions. The mangoes find their way to the export market and to the fruit juice drink industry. Most of these prawns and sugar go to the export market, thus contributing to country's dollar earnings. Other exports include garments, toys, houseware, and furniture made of bamboo. The top five livestock are: carabao, cattle, chicken, duck and goat.

Cellular phone service is also now available by top cellular phone providers of the country.Iloilo has 3 TV station broadcasting locally but part of national networks, GMA-6, ABSCBN-10 and IBC-12. Iloilo City has 2 major cable networks, Skycable and Cable Star and a number of Dream cablefed hubs in the towns. In Iloilo City, there are 11 FM stations. There are 6 AM stations operating in Iloilo; Bombo Radyo, Aksyon Radyo, RMN, Radyo ng Bayan, RGMA-DYSI and Budyong. There is only on broadcasting station under the Catholic Media Network-Veritas, an FM station in Calinog, Iloilo — DYMI.

The Dinagyang Festival is celebrated every fourth weekend of January to commemorate the Christianization of the natives and to honor the Holy Child Jesus. It is a very colorful parade coupled with a dramatization in honor of the patron Saint Sto. Niño as the object of dramatized offerings and prayers amidst the cracking of drums and shouts of "Viva Señor Santo Niño." The thundering of "Hala Bira" by the tribe members makes the celebration a lively one.

Jaro's celebration of the Feast of Nuestra Señora de la Candelaria (Our Lady of the Candles) every Feb. 2 is well-known in the Philippines.

The Paraw Regatta is a race among native outriggers in the straits between Iloilo City and Guimaras Island is celebrated every third week of February.

La Paz Fiesta
(May 24) -This is the district fiesta of La Paz in honor of Nuestra Señora de La Paz de Bien Viaje. 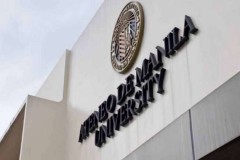