In a land area of 3,498 square kilometers, the diocesan territory covers the civil jurisdiction of the province of Northern Samar.

Northern Samar is one of the three provinces comprising Samar Island. It was created on June 19, 1965, through the issuance of Republic Act 4221, "Providing for the Division of Samar Island into Three Provinces: Samar, Eastern Samar, and Northern Samar".

The province is located in the eastern part of the Philippine Archipelago, bounded on the north by the San Bernardino Strait, on the east by the Pacific Ocean, on the west by the Samar Sea, and on the south by Samar.

Northern Samar is composed of 24 municipalities and 569 barangays (villages). Catarman is the provincial capital and center of trade and commerce.

The majority speak Waray dialect, along with Inabaknon, which is predominantly spoken in Capul Island. English is used as the language of business and education. Tagalog is also widely spoken and understood.

Suffragan of Palo
Created: December 5, 1974
Erected: March 11, 1975
Comprises the Civil Jurisdiction of the Province of Northern Samar
Titular: Our Lady of the Annunciation, August 29

On Dec. 5, 1974, Catarman was made a diocese by Pope Paul VI, and on March 11, 1975, and Father Angel T. Hobayan was installed as the First Residential Bishop of the Diocese of Catarman.

The diocese covers the whole province of Northern Samar, one of three provinces within the island of Samar bounded on the north by San Bernardino Strait, on the east by the Philippine Sea, on the west by the Samar Sea, and on the south by the boundaries of Western Samar and Eastern Samar provinces. Covered by the diocese are a total of 24 towns, 570 barangays, and a land area of 3,499 kilometers. Catarman is the capital town and the center of the civil administration of the province.

On the ecclesiastical side, the Diocese of Catarman is divided into four vicariates representing the municipalities of Allen, Catarman, Laoang, and Gamay, to which belong 18 canonically established parishes. Catarman is the seat of the diocese.

History of Northern Samar
Between 1599 and 1605, the Jesuits established a mission residence in Palapag among the Ibabao populace. These missionaries stayed until the late 17th century when they were expelled from the Philippines and replaced by the Franciscans.

As the San Bernardino Strait was along the route of the Spanish galleons plying between Manila and Acapulco, Mexico, a royal port was established in Palapag where the richly laden Manila galleons were protected from unfavorable winds and troubled seas.

In the early years of the 16th century, shipbuilders were drafted from Palapag to the Cavite shipyards for the construction of galleons and vessels for the conservation of defense of the island. It was also at this time that these recruits ignited the Sumoroy insurrection, which signaled a general uprising against Spain in the Visayas and Mindanao. The insurrection simultaneously flared northward to Albay and southward to the northern coasts of Mindanao and then Cebu. It took over a year before the Spaniards were able to subdue the rebellion.

Later in 1898, when the Americans landed on the beach of Catarman, they organized a revolutionary army led by General Vicente Lukban who fought the invaders armed with cannons and rifles with only bolos and "paltiks". Although defeated, they, however, continued to harass the Americans through guerilla warfare.

During World War II, the people of Northern Samar organized a platoon of volunteers supported by voluntary contributions. The contingent became a part of the Philippine National Guards in Manila. The province also helped the government by purchasing a considerable amount of bonds floated to finance the National Commission for Independence, then organized by Manuel L. Quezon after a coalition of the Nacionalista and Democrata parties was formed.

How to reach Catarman Diocese? 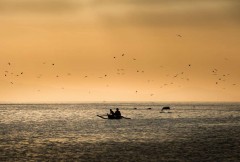