In a land area of 5,591 square kilometers, the diocesan territory covers the civil jurisdiction of the province of Samar (formerly known Western Samar).

Samar Island occupies the eastern portion of the Philippines. It lies southeast of Luzon and covers the northernmost section of Eastern Visayas. It is separated from Luzon on the north by San Bernardino Strait and from Leyte on the southwest by the narrow San Juanico Strait. The territory is bounded on the east by the Pacific Ocean, on the south by Leyte Gulf and on the west by the Samar Sea.

Leyte and Samar were once considered one province by the Spanish government placed under the jurisdiction of Cebu. In 1768 it was divided into separate provinces, with Tacloban as the capital of Leyte and Catbalogan the capital of Samar.

On Nov. 28, 1937, Pope Pius XI separated Leyte from the Calbayog diocese by creating the Diocese of Palo, in Leyte. On Oct. 22, 1960 Pope John XXIII decreed the division of Samar by creating the Diocese of Borongan, also in Samar. And again on March 11, 1975, Pope Paul VI decreed the creation of the Diocese of Catarman, also in Samar. Thus the whole island of Samar now has three dioceses: Calbayog in Western Samar, Borongan in Eastern Samar, and Catarman in Northern Samar. These three dioceses belong to the Ecclesiastical Province of Palo, Leyte, and are suffragans of this archdiocese.

Vision: "A community of persons united in faith, hope and love, centered in Christ, living by the Word and the Sacraments, prophetically witnessing to the Gospel values of sharing, unity, peace and justice, in solidarity with the poor, within the concrete historical situation and needs of the people of Samar, under the guidance of the Magisterium and the example of Mary, Mother of the Church."

Goal: "The Diocese of Calbayog shall have Ecclesial Communities that are renewed, transformed, animated and consumed by the Gospel values of sharing, unity, peace and justice in solidarity with the poor, imbued with the spirit of Vatican II and Plenary Council of the Philippines II, conscious and actively working toward Total Human Development, whose impact will be felt by society."

Thrust: "Basic Ecclesial Communities that are committed to Evangelization and Total Human Development." 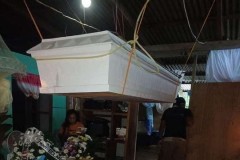