Yangon is the capital city of Myanmar. There are altogether 14 states and divisions. Yangon archdiocese comprises the whole of the Yangon (Superior) Division, parts of Bago Division, Ayeyawaddy Division, and Kayin and Mon states. It shares a common boundary with Thailand. The archdiocese covers an area of 47,191.29 square kilometers with hills, mountains and fields. The total population in the whole archdiocese is about 15 million and Catholics numbered 79,682 in 2008 statistics.

In 1954, the Catholic Hierarchy of Burma (Myanmar) was established by Pope Pius XII, and the Vicariate of Southern Burma was divided into two sections. The larger eastern portion of the vicariate became the Archdiocese of Rangoon (Yangon). The western portion, comprising the three districts of Bassein (Pathein), Myaungmya and Henzada, became the Diocese of Bassein. 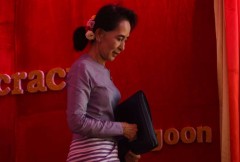