The total land area of the diocese is 40,960 square kilometers.

Mawlamyine Diocese consists of 13 townships including Mawlamyine, the capital of Mon state and Dawei as well as Myeik, the capital of Taninthayi Division. The territory is a costal region along the Andaman Sea and bordered by the Mon State in the South, Kayin state in the north and east, and Thailand to the east with the mountains and hills. It spans around 860 kilometers from north to south and about 150 kilometers from east to west.

The total population is 2,703,369. Ethenic groups are Kayin, Mergurian (Burmese), Tavoyan (Burmese), Mon and Mawkin (Sea Gipsies). Most of the Catholics live in the village and rural areas. Buddhism is the dominant religion in the diocese.

Vision of the diocese

Mission of the diocese

To proclaim the word of God in Christ's lifestyle, who is the way, the truth and the life in line with the beatitudes
To work for peace, harmony and development of all people regardless of race, culture and religion
To assist the human, personal and spiritual growth and development of everyone in the diocese

The languages used in the diocesan territory are Kayin and Burmese (Myanmar). Most of the Catholics live in villages and rural areas. Buddhism is the dominant religion in the Diocese.

Mawlamyine was the headquarters of Southern Burma Mission of Roman Catholic Church from 1830 until 1853. In 1830 the Vicariate of Ava and Pegu, as it was then known ecclesiastically was administered by the priests of Propaganda Fide, the department of the pontifical administration charged with the spread of Catholicism and with the regulation of ecclesiastical affairs in non-Catholic countries, and the Oblates of the Blessed Virgin Mary.

Bishop Frederick Cao was consecrated in Rome in 1830. He came to Myanmar in the same year and in 1832, he visited the town of Mawlamyine together with the surrounding villages including Amtherst. The town at the mouth of Salween river, now known as Kyait-kha-mee was detached from the Siamese Mission and made part of the Vicariate Apostolic of Ava and Pegu, to the suggestion of Msgr. Cao to Propaganda Fide during the year 1840. Burma Mission was formally handed over to the society of Oblates of Turin.

Father Faustino Ceretti was consecrated Bishop in Rome in 1842 and the Superior of the Society of the Oblates formally accepted the Pegu and Ava Mission. Bishop Faustino Ceretti and five Oblates priests finally came to Burma. In 1847, the bishop brought the Sisters of St. Joseph of the Apparition to Mawlamyine to take charge of the girls' school and the sisters began their first mission in Burma. Bishop Ceretti passed away in Italy, in 1854.

Father J.B. Balma came to Burma in 1846. He was stationed in Mawlamyine and consecrated Bishop in 1848. The Society of the Oblates handed the Mission over to the Society of the Mission Entrangeres of Paris (MEP) in 1856. Bishop Balma left for Italy in November the same year.

March 30, 1856, Father Paul Bigandet was consecrated in Rome Titular Bishop of Ramatha and Vicar Apostolic of Ava and Pegu. He came to Mawlamyine on April 14, the same year. He proclaimed the Good News there until 1894.

In 1954, the Catholic Hierarchy of Burma (Myanmar) was established by Pope Pius XII, and the Vicariate of Southern Burma was divided into two sections. The larger eastern part of the vicariate became Archdiocese Yangon (Rangoon). Bishop V. Bazin became archbishop and Father Gabriel Thohey Mahn Gaby was consecrated Bishop and auxillary to Bishop V. Bazin in 1965. When Bishop V. Bazin retired from office and returned to France in 1971, Archbishop Gabriel T. Mahn Gaby took over as Metropolitan Archbishop of Yangon.

The region has car roads in the coastal area, boats are used on the sea, rivers and creeks.

All tribal cultures are beginning to disappear due to instability, displacements, struggling for livelihood and survival and living with fear.

How to reach Mawlamyine Diocese? 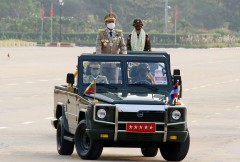