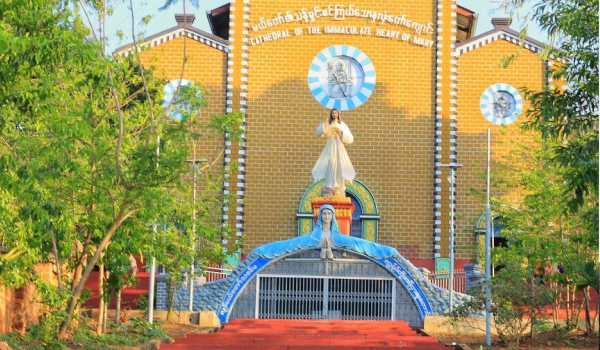 The diocesan territory covers 45, 856 square kilometers. The civil population is 925, 000 at the end of 2008 and the Catholic population is 58, 000. Most residents are ethnic Shan, with an estimated 46 percent, Lahu 20 percent and Akha 14 percent and the rest are Myanmar and Wa enthnic.

The standard Myanmar language is in use. In rural areas people are using their own language according to their ethnic, Shan, Lahu and Akha.

The pioneering work of Evangelization in Kengtung (Kyaingtong), was initiated by Bishop Emmanuele Sagrada (PIME) of Taungngu, who sent Father Francesco Portuluppi, Father Lombardi and Father Erminio Bonetta, who are PIME Missionaries, to the Eastern Shan State in 1912. The leader of the priests was Father Erminio Bonnetta (PIME), an experienced missionary of the hills. A school was opened and the sons of the local chieftain were among the first students. Contact was made with villages and Father Portaluppi (PIME) established himself at Mong Ping, Shan village 105 kilometers (65 miles) West of Kengtung on the road to the Salween River. In 1913, the following year, the first sign of progress among the Akhas began to pave the way for conversion. World War I stopped the flow of the missionaries.

The opening of the new State Hospital led to the introduction of the first sisters who arrived on Feb. 26, 1916 from Italy. They were from the Religious Congregation of Sisters of Maria Bambina and at the request of Msgr. Erminio Bonetta (PIME), they were employed to work in the hospital. They did wonderful work. They opened an orphanage. In 1919 Bishop Sagrada (PIME) visited the mission and found it solidly established. A Leper Colony was opened in 1945. The third mission station was opened at Mong Lain, about 130 kilometers (80 miles) south on the road to Thailand in 1924.

On April 27, 1927, the territory was erected as the Prefecture Apostolic of Kengtung with Msgr. Erminio Bonetta as its first prefect. There were 8 priests at that time.

Mission station Mong Yang was opened. Then a famine occurred that same year and the charity and the sympathy of the missionaries contributed to the conversion of 150 families. In 1912, the Sisters of Charity were asked to take charge of the Civil Hospital in Loimwe, some 30 kilometers (18 miles) south of Kengtung, the station was thus opened.

Mong Yong and Mong Phyak were opened. Catechumens numbered seven thousand. Temporary buildings were replaced. Schools were progressing and the sisters were doing a fine job among the sick and lepers.

In 1938, the mission opened its own hospital at Mong Lain. In 1913, seminary was opened in Kengtung. In 1940 there were 24 priests. The Italian priests were interned by the British, some in India others in Myanmar during World War II. Under the Japanese, there were kept at Kalaw.

After the Japanese invasion, the missionaries were allowed to return to their places. In 1947, Msgr. Erminio Bonetta (PIME), due to his health reason, went to Italy for medical treatment and returned on the following year with six new missionaries. On a trip to Mong Phyak and Mong Yong on a salt laiden truck, the driver lost control of his vehicle on a deep descent. Msgr. Bonetta and an old woman were pinned under the truck and killed instantly.

In May 1950, Kengtung was raised to a Vicariate and Msgr. Ferdinando Guercilena (PIME) was chosen as its first Vicar. He visited Italy for the first time in 24 years and was ordained in his native village of Montodine, Diocese of Crema, on Oct. 8, 1950. He returned to Kengtung on the following year.

The first prayer book, hymn book and the "Life of Christ" were published in Lahu language in 1954 and in Akha language in 1955; also in Shan. Father Farronato (PIME) was killed by the Nationalist Chinese on his way to visit Catholics. He was buried in Mong Yong by the side of his brother priest, who had died of black fever in 1926.

Father Stephen Vong, a local Chinese, educated at the Anglo-Chinese School in Yangon, was the first priest of Kengtung Vicariate. He died a martyr in April, 1961.

On Jan. 1, 1955 when the hierarchy was established in Myanmar, the Vicariate became a Diocese with Msgr. Ferdinando Guercilena (PIME) as its first Bishop. Later in 1967, he went back to Italy for medical treatment.

Meanwhile, Pope Paul VI nominated Msgr. Abraham Than of Taungngu as the auxiliary bishop of Kengtung on Dec. 19, 1968. He was ordained at Yado on May 11, 1969 by Bishop Sebastian U Shwe Yauk.

Bishop Abraham Than arrived in Kengtung on June 7, 1969 and later became the residential bishop of Kengtung on Sept. 19, 1973. He created several new parishes all over the diocese such as: Tachileik, Thiri, Mong Khat, Pan Non Lon, Ton Kuam, St. Peter and Kafa parishes. The evangelization in the Myanmar-Chinese border, Special Region No. 4 is the most remarkable achievement in his lifetime. He retired in January 2002.

Msgr. Peter Louis Ca Ku was ordained on Dec. 8, 1997 as auxiliary bishop of Kengtung, succeeded Bishop Abraham Than and was installed on Jan. 25, 2002 by Msgr. Adriano Bernardini, the apostolic delegate to Myanmar, in the Immaculate Heart of Mary Cathedral, Kengtung.

Kengtung (Kyaing Tong) is located in the north eastern part of Myanmar and surrounded by mountains.