The population was approximately 1 million at the end of 2006. (The population of the whole country is 2,751,314). The other cities have less than 100,000 people each. The majority of the population belongs to the ethnic group of Khalkha Mongol. Other Mongolian groups are Oirad, Buriad, Uriankhai. There are also Kazakhs, local Russians and Chinese in the territory.

Mongolian is the language used in the country. English is used by the Church; and Kazakh, Chinese, Russian by ethnic groups.

The culture is originally nomadic, strongly influenced by Russian and European culture.

Music: pentatonic, musical instruments are similar to Chinese, Korean etc. stringed instruments. The national instrument is the Morin Khuur, the horse-headed fiddle, a cello-like instrument with two strings and a bow, both made of white horse tail hair.

Dance: A Western Mongolian tribe, the Oirads dance the bilge, which uses much shoulder movement. The dances usually tell stories. 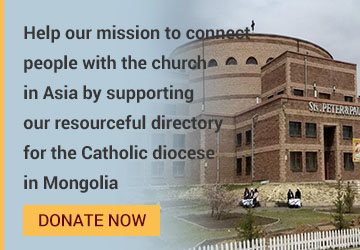 How to reach Ulaanbaatar Apostolic Prefecture? Mongolians brave freezing nights to fight corruption
Despite temperatures below freezing, Mongolians are protesting against corruption among lawmakers... Kazakhstan papal visit to boost Church in Central Asia
Pope Francis is known as a promoter of the idea of harmonious coexistence of different people and... Youngest cardinal from Mongolia has vital role to play
Bishop Giorgio Marengo has roots in Italy and is expected to link Europe and Asia in more ways than...